The Effects of Langston Hughes in the Harlem Renaissance 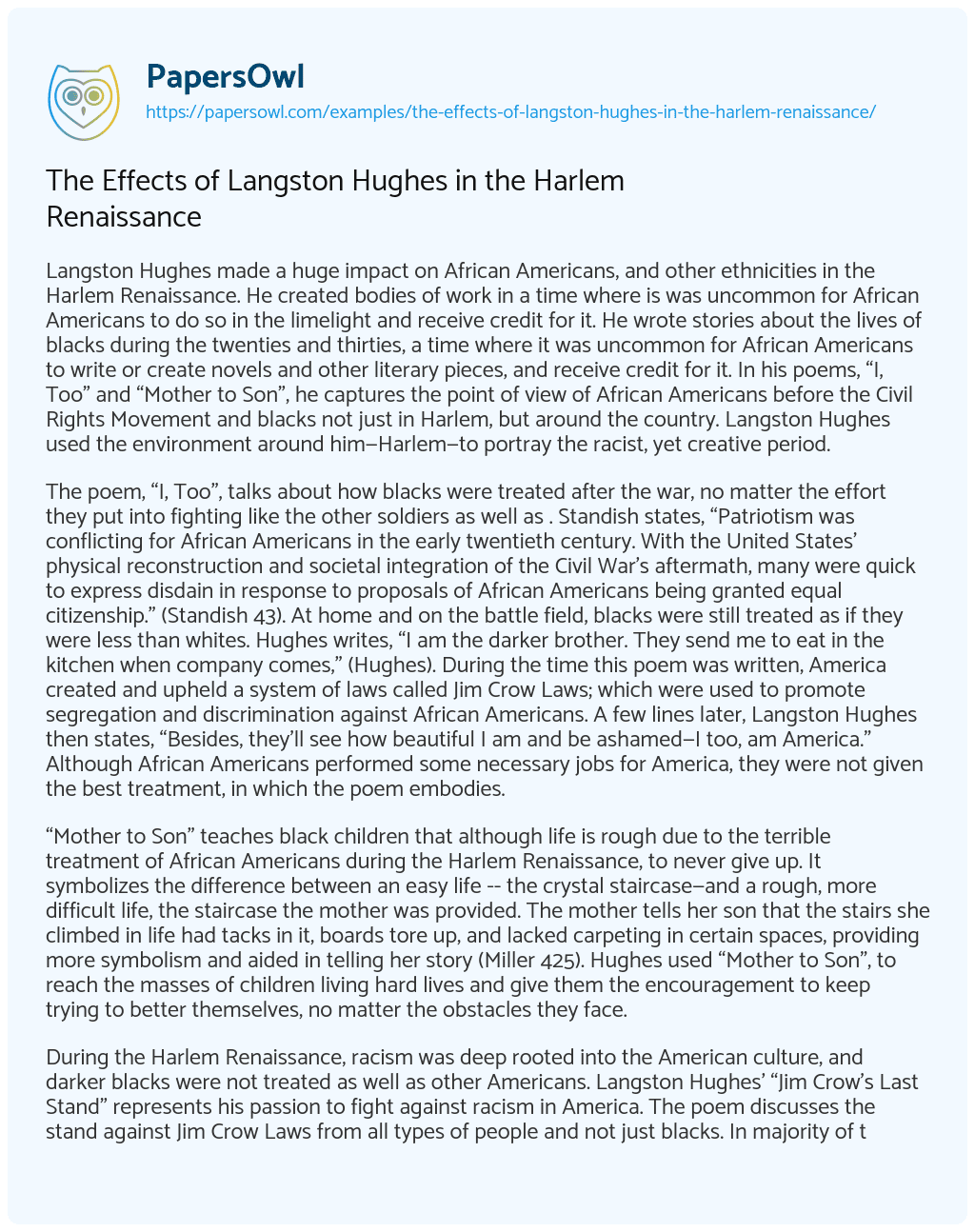 Langston Hughes made a huge impact on African Americans, and other ethnicities in the Harlem Renaissance. He created bodies of work in a time where is was uncommon for African Americans to do so in the limelight and receive credit for it. He wrote stories about the lives of blacks during the twenties and thirties, a time where it was uncommon for African Americans to write or create novels and other literary pieces, and receive credit for it. In his poems, “I, Too” and “Mother to Son”, he captures the point of view of African Americans before the Civil Rights Movement and blacks not just in Harlem, but around the country. Langston Hughes used the environment around him—Harlem—to portray the racist, yet creative period.

The poem, “I, Too”, talks about how blacks were treated after the war, no matter the effort they put into fighting like the other soldiers as well as . Standish states, “Patriotism was conflicting for African Americans in the early twentieth century. With the United States’ physical reconstruction and societal integration of the Civil War’s aftermath, many were quick to express disdain in response to proposals of African Americans being granted equal citizenship.” (Standish 43). At home and on the battle field, blacks were still treated as if they were less than whites. Hughes writes, “I am the darker brother. They send me to eat in the kitchen when company comes,” (Hughes). During the time this poem was written, America created and upheld a system of laws called Jim Crow Laws; which were used to promote segregation and discrimination against African Americans. A few lines later, Langston Hughes then states, “Besides, they’ll see how beautiful I am and be ashamed—I too, am America.” Although African Americans performed some necessary jobs for America, they were not given the best treatment, in which the poem embodies.

“Mother to Son” teaches black children that although life is rough due to the terrible treatment of African Americans during the Harlem Renaissance, to never give up. It symbolizes the difference between an easy life — the crystal staircase—and a rough, more difficult life, the staircase the mother was provided. The mother tells her son that the stairs she climbed in life had tacks in it, boards tore up, and lacked carpeting in certain spaces, providing more symbolism and aided in telling her story (Miller 425). Hughes used “Mother to Son”, to reach the masses of children living hard lives and give them the encouragement to keep trying to better themselves, no matter the obstacles they face.

During the Harlem Renaissance, racism was deep rooted into the American culture, and darker blacks were not treated as well as other Americans. Langston Hughes’ “Jim Crow’s Last Stand” represents his passion to fight against racism in America. The poem discusses the stand against Jim Crow Laws from all types of people and not just blacks. In majority of these poems, he talks about racial justice and the hardships of African Americans during the early twentieth century. Standish quotes, “‘Hughes writes to remind a people who had been enslaved that their history began long before 1619…[reminding] them that their [history] is not a legacy of enslavement, but that their history began along the rivers of Africa…’ (Winbush 15).” (Standish 43). Langston Hughes proved many stereotypes of African Americans to be false, by creating multiple bodies of work using correct grammar, morals, and real life in Harlem. Because of this, he has given the black community and America alike some of the best poems and ideas, creating the fusion of jazz music and poetry.

Although African Americans were not considered intelligent during the era of the Harlem Renaissance, Langston Hughes proves in his poems and writing skills that this time period was instrumental in telling the story of blacks in America, families in Harlem, and Hughes himself. He used bodies of work like “I, Too” and “Mother to Son” to show the world through the point of view of African Americans during that time. His words were used by other important African American leaders such as Reverend Dr. Martin Luther King, Jr (Miller). Hughes’ writings is what earned him his fame and legacy today.

“I Too” and “Mother to Son” are similar, because they show that although someone may encounter hardships in life, they can overcome them and be happy. “I, Too” tells America that no matter how it may treat blacks, that the African American community recognizes its beauty and other Americans should too. This relates to “Mother to Son”, because it ensures blacks that they are important as well and that they may go through trials and tribulations, but they will succeed. Langston Hughes’ “I, Too” differentiates from “Mother to Son”, because “I, Too” discusses exclusion from others in America due to racism, but “Mother to Son” does not focus on the principle of racism or prejudice in its message.

The Harlem Renaissance created a sense of livelihood and comfort for blacks to show the world their troubles and creative abilities. Langston Hughes was instrumental in this process, because of the messages he taught in his bodies of work. As this was uncommon during the twenties and thirties, Hughes reached the masses of many Americans during his reign. African Americans everywhere were encouraged by Hughes’ work and continued to support him. Some of his work was quoted during the Civil Rights Movement, which shifted the treatment of black within America. The Harlem Renaissance and Langston Hughes were instrumental parts in fighting against racism, and promoting good images of African Americans.

The Effects of Langston Hughes in the Harlem Renaissance. (2021, Mar 25). Retrieved from https://papersowl.com/examples/the-effects-of-langston-hughes-in-the-harlem-renaissance/