The Desegregation of American Baseball: a Jackie Robinson Story 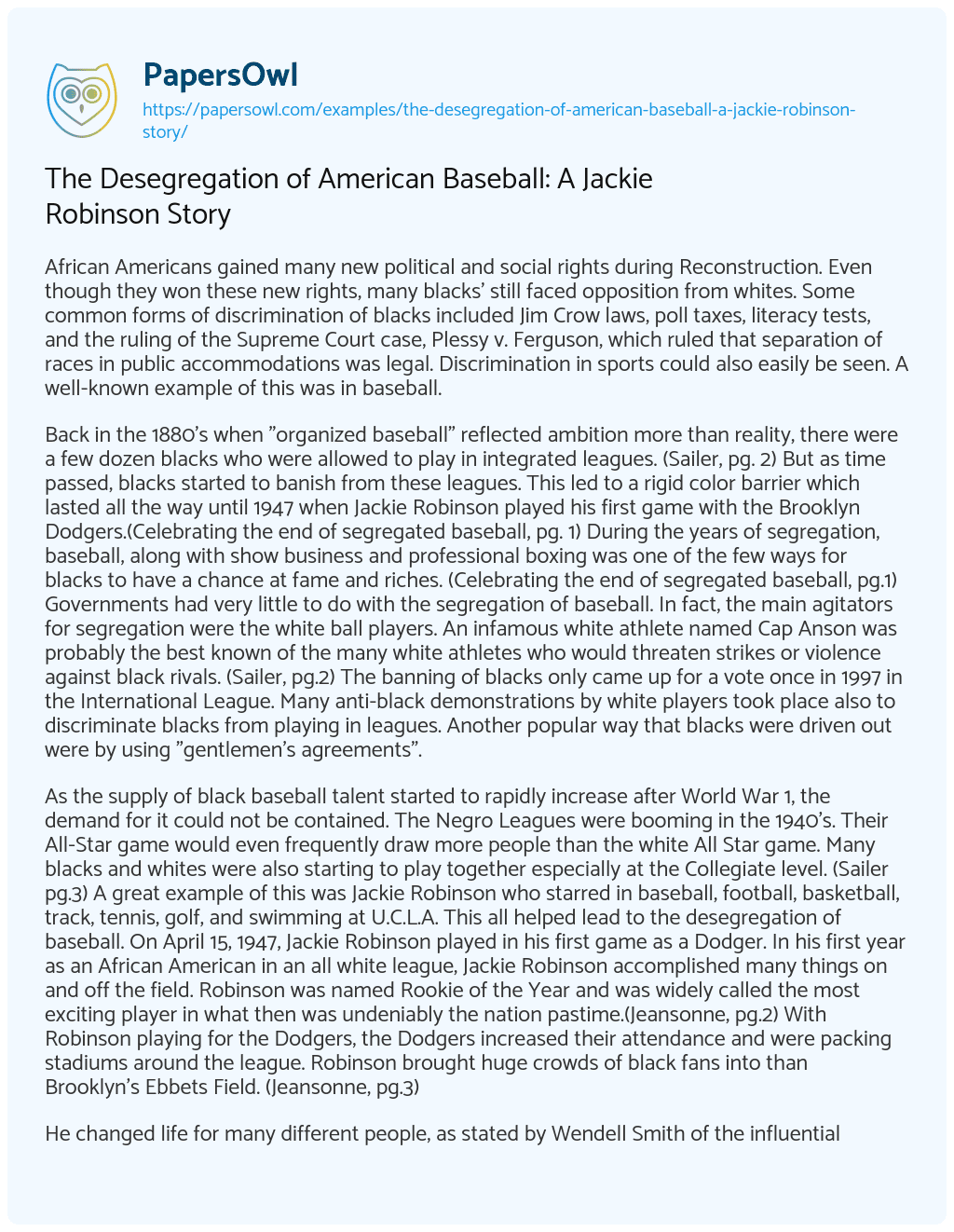 African Americans gained many new political and social rights during Reconstruction. Even though they won these new rights, many blacks’ still faced opposition from whites. Some common forms of discrimination of blacks included Jim Crow laws, poll taxes, literacy tests, and the ruling of the Supreme Court case, Plessy v. Ferguson, which ruled that separation of races in public accommodations was legal. Discrimination in sports could also easily be seen. A well-known example of this was in baseball.

Back in the 1880’s when “organized baseball” reflected ambition more than reality, there were a few dozen blacks who were allowed to play in integrated leagues. (Sailer, pg. 2) But as time passed, blacks started to banish from these leagues. This led to a rigid color barrier which lasted all the way until 1947 when Jackie Robinson played his first game with the Brooklyn Dodgers.(Celebrating the end of segregated baseball, pg. 1) During the years of segregation, baseball, along with show business and professional boxing was one of the few ways for blacks to have a chance at fame and riches. (Celebrating the end of segregated baseball, pg.1) Governments had very little to do with the segregation of baseball. In fact, the main agitators for segregation were the white ball players. An infamous white athlete named Cap Anson was probably the best known of the many white athletes who would threaten strikes or violence against black rivals. (Sailer, pg.2) The banning of blacks only came up for a vote once in 1997 in the International League. Many anti-black demonstrations by white players took place also to discriminate blacks from playing in leagues. Another popular way that blacks were driven out were by using “gentlemen’s agreements”.

As the supply of black baseball talent started to rapidly increase after World War 1, the demand for it could not be contained. The Negro Leagues were booming in the 1940’s. Their All-Star game would even frequently draw more people than the white All Star game. Many blacks and whites were also starting to play together especially at the Collegiate level. (Sailer pg.3) A great example of this was Jackie Robinson who starred in baseball, football, basketball, track, tennis, golf, and swimming at U.C.L.A. This all helped lead to the desegregation of baseball. On April 15, 1947, Jackie Robinson played in his first game as a Dodger. In his first year as an African American in an all white league, Jackie Robinson accomplished many things on and off the field. Robinson was named Rookie of the Year and was widely called the most exciting player in what then was undeniably the nation pastime.(Jeansonne, pg.2) With Robinson playing for the Dodgers, the Dodgers increased their attendance and were packing stadiums around the league. Robinson brought huge crowds of black fans into than Brooklyn’s Ebbets Field. (Jeansonne, pg.3)

He changed life for many different people, as stated by Wendell Smith of the influential black weekly, the Pittsburgh Courier, “Jackie’s nimble, Jackie’s quick, Jackie makes the turn styles click. ” According to Joe Morgan, “What Robin did was change’ the way baseball was played.”(Jeansome, pg.3) Off the field Jackie made many contributions. He wrote many letters in which he would argue his political and racial beliefs. He also invested in a bank and construction company to cater to minorities. Robinson even made appearances with people such as Martin Luther King Jr. at various civil-rights demonstrations/(Jeansonne, pg.3) These contributions made by Jackie Robinson and his breaking of the color barrier in baseball gave many blacks inspiration. Many whites began to realize that African Americans are the same as everyone else. Jackie Robinson’s breaking of the color barrier in baseball showed that blacks and whites could get along. It also was a major step in the right direction for African American rights.

The Desegregation of baseball was a major event in the 1940’s. This event had many effects on people. For many, Jackie Robinson is a hero for what he accomplished.

The Desegregation of American Baseball: A Jackie Robinson Story. (2022, Nov 23). Retrieved from https://papersowl.com/examples/the-desegregation-of-american-baseball-a-jackie-robinson-story/