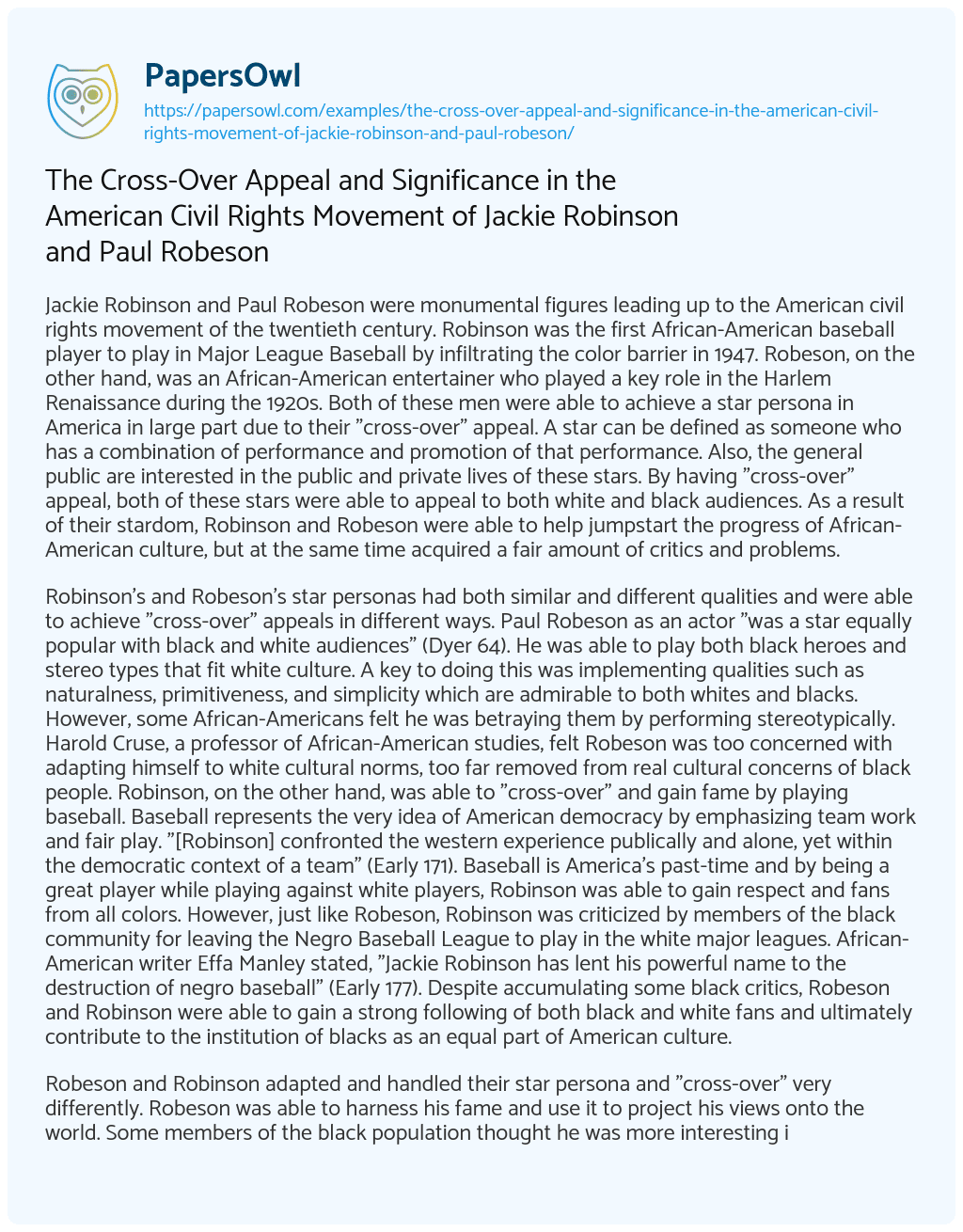 Jackie Robinson and Paul Robeson were monumental figures leading up to the American civil rights movement of the twentieth century. Robinson was the first African-American baseball player to play in Major League Baseball by infiltrating the color barrier in 1947. Robeson, on the other hand, was an African-American entertainer who played a key role in the Harlem Renaissance during the 1920s. Both of these men were able to achieve a star persona in America in large part due to their “cross-over” appeal. A star can be defined as someone who has a combination of performance and promotion of that performance. Also, the general public are interested in the public and private lives of these stars. By having “cross-over” appeal, both of these stars were able to appeal to both white and black audiences. As a result of their stardom, Robinson and Robeson were able to help jumpstart the progress of African-American culture, but at the same time acquired a fair amount of critics and problems.

Robinson’s and Robeson’s star personas had both similar and different qualities and were able to achieve “cross-over” appeals in different ways. Paul Robeson as an actor “was a star equally popular with black and white audiences” (Dyer 64). He was able to play both black heroes and stereo types that fit white culture. A key to doing this was implementing qualities such as naturalness, primitiveness, and simplicity which are admirable to both whites and blacks. However, some African-Americans felt he was betraying them by performing stereotypically. Harold Cruse, a professor of African-American studies, felt Robeson was too concerned with adapting himself to white cultural norms, too far removed from real cultural concerns of black people. Robinson, on the other hand, was able to “cross-over” and gain fame by playing baseball. Baseball represents the very idea of American democracy by emphasizing team work and fair play. “[Robinson] confronted the western experience publically and alone, yet within the democratic context of a team” (Early 171). Baseball is America’s past-time and by being a great player while playing against white players, Robinson was able to gain respect and fans from all colors. However, just like Robeson, Robinson was criticized by members of the black community for leaving the Negro Baseball League to play in the white major leagues. African-American writer Effa Manley stated, “Jackie Robinson has lent his powerful name to the destruction of negro baseball” (Early 177). Despite accumulating some black critics, Robeson and Robinson were able to gain a strong following of both black and white fans and ultimately contribute to the institution of blacks as an equal part of American culture.

Robeson and Robinson adapted and handled their star persona and “cross-over” very differently. Robeson was able to harness his fame and use it to project his views onto the world. Some members of the black population thought he was more interesting in himself rather than all black’s well-being. Either way, Robeson was able to produce positive personal results as a “cross-over” star. Unfortunately, Robinson was unable to respond positively to his “cross-over” appeal. Jackie was unable to bear the pressure put on him by society, and his star-persona ultimately led to his death. “Never had a black person mention Jackie Robinson without noting that he died a physical wreck, at the age of 53- a fact attributed to the stress of his years as a major league ball player.

Paul Robeson and Jackie Robinson had a great impact on the American civil rights movement by having the rare quality of “cross-over” appeal. Although they both acquired a solid amount of disapproving blacks, they were able to fuse popular culture with the culture of African-Americans.

The Cross-Over Appeal and Significance in the American Civil Rights Movement of Jackie Robinson and Paul Robeson. (2022, Nov 23). Retrieved from https://papersowl.com/examples/the-cross-over-appeal-and-significance-in-the-american-civil-rights-movement-of-jackie-robinson-and-paul-robeson/