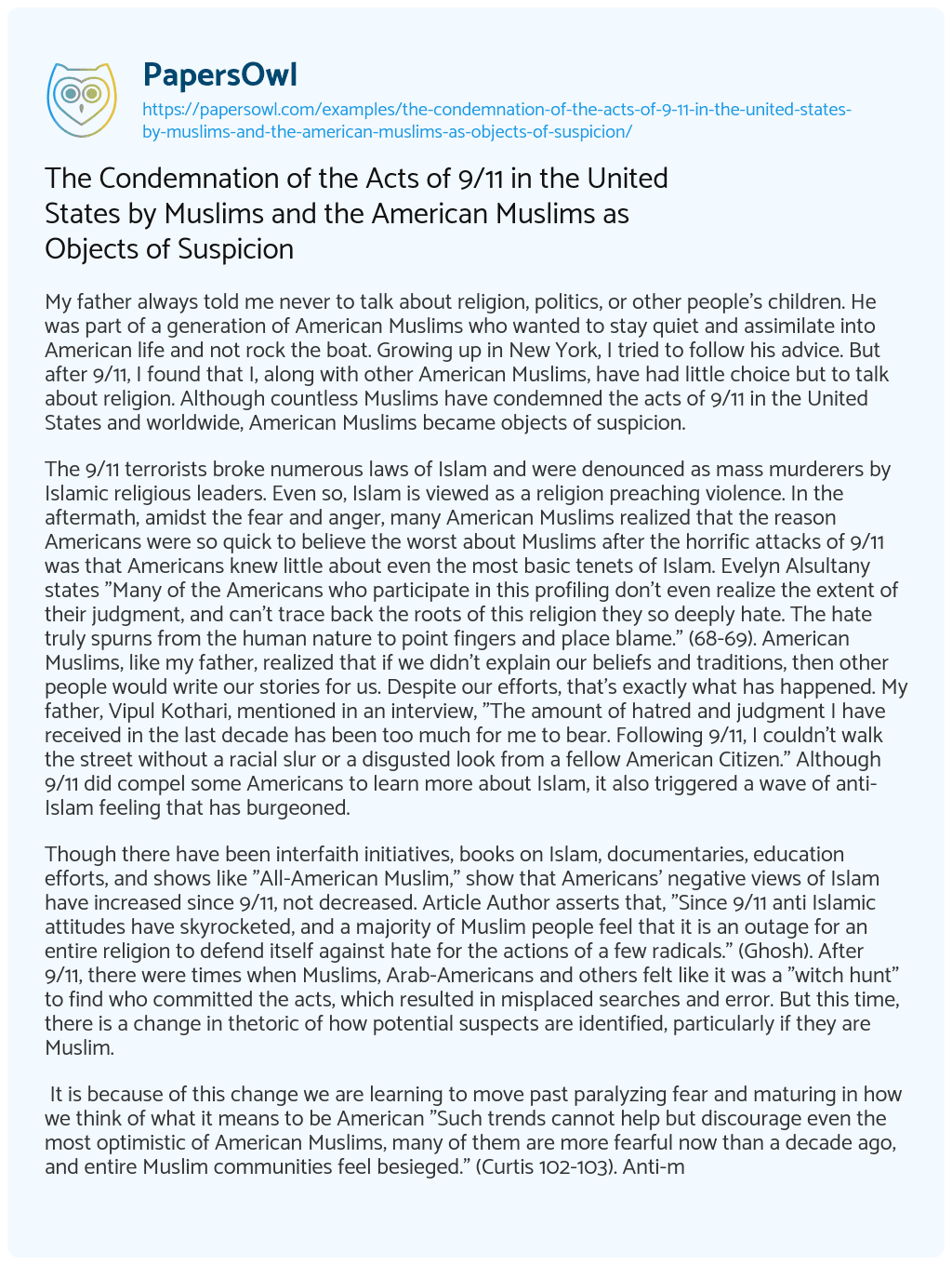 The 9/11 terrorists broke numerous laws of Islam and were denounced as mass murderers by Islamic religious leaders. Even so, Islam is viewed as a religion preaching violence. In the aftermath, amidst the fear and anger, many American Muslims realized that the reason Americans were so quick to believe the worst about Muslims after the horrific attacks of 9/11 was that Americans knew little about even the most basic tenets of Islam. Evelyn Alsultany states “Many of the Americans who participate in this profiling don’t even realize the extent of their judgment, and can’t trace back the roots of this religion they so deeply hate. The hate truly spurns from the human nature to point fingers and place blame.” (68-69). American Muslims, like my father, realized that if we didn’t explain our beliefs and traditions, then other people would write our stories for us. Despite our efforts, that’s exactly what has happened. My father, Vipul Kothari, mentioned in an interview, “The amount of hatred and judgment I have received in the last decade has been too much for me to bear. Following 9/11, I couldn’t walk the street without a racial slur or a disgusted look from a fellow American Citizen.” Although 9/11 did compel some Americans to learn more about Islam, it also triggered a wave of anti-Islam feeling that has burgeoned.

Though there have been interfaith initiatives, books on Islam, documentaries, education efforts, and shows like “All-American Muslim,” show that Americans’ negative views of Islam have increased since 9/11, not decreased. Article Author asserts that, “Since 9/11 anti Islamic attitudes have skyrocketed, and a majority of Muslim people feel that it is an outage for an entire religion to defend itself against hate for the actions of a few radicals.” (Ghosh). After 9/11, there were times when Muslims, Arab-Americans and others felt like it was a “witch hunt” to find who committed the acts, which resulted in misplaced searches and error. But this time, there is a change in thetoric of how potential suspects are identified, particularly if they are Muslim.

It is because of this change we are learning to move past paralyzing fear and maturing in how we think of what it means to be American “Such trends cannot help but discourage even the most optimistic of American Muslims, many of them are more fearful now than a decade ago, and entire Muslim communities feel besieged.” (Curtis 102-103). Anti-mosque incidents have escalated in recent years. “Earlier this summer, a mosque in Joplin, Missouri, burned to the ground. Last year, Roger Stockham was arrested with explosives outside the Islamic Center in Dearbom, Michigan and an arson fire seriously damaged a mosque in Wichita, Kansas. Incidents of and hate groups have been on the rise, too; one of the most horrific hate crimes was the murder of Shaima Alawadi, a young mother who had received anonymous notes calling her a terrorist.” (Memon).

Increases in these hate crimes further belittle from my father and most other Muslim Americans experiences and civil rights in this land that so desperately advocates freedom and equality for all. Almost every Islamic person that has some recognition in society that I personally know receives hate mail and sometimes death threats. Islam is the second-largest religion in the world, and Muslims comprise more than one-fifth of the world’s population. No religion can flourish for 1,400 years without being flexible and adaptable. The defamatory rhetoric directed at Muslims and Islam in this countryhas little to do with the actual religion or its adherents. For American Muslims, the past decade has been tumultuous. We have emerged from private life to public life, into the public sphere in an effort to aid understanding between the communities of our multicultural country.

The Condemnation of the Acts of 9/11 in the United States by Muslims and the American Muslims as Objects of Suspicion. (2022, Nov 14). Retrieved from https://papersowl.com/examples/the-condemnation-of-the-acts-of-9-11-in-the-united-states-by-muslims-and-the-american-muslims-as-objects-of-suspicion/

American Muslims in the United States

Islamic Views on the LGBTQ Muslims

Re-evaluating Stereotypes: all Muslims are Terrorists