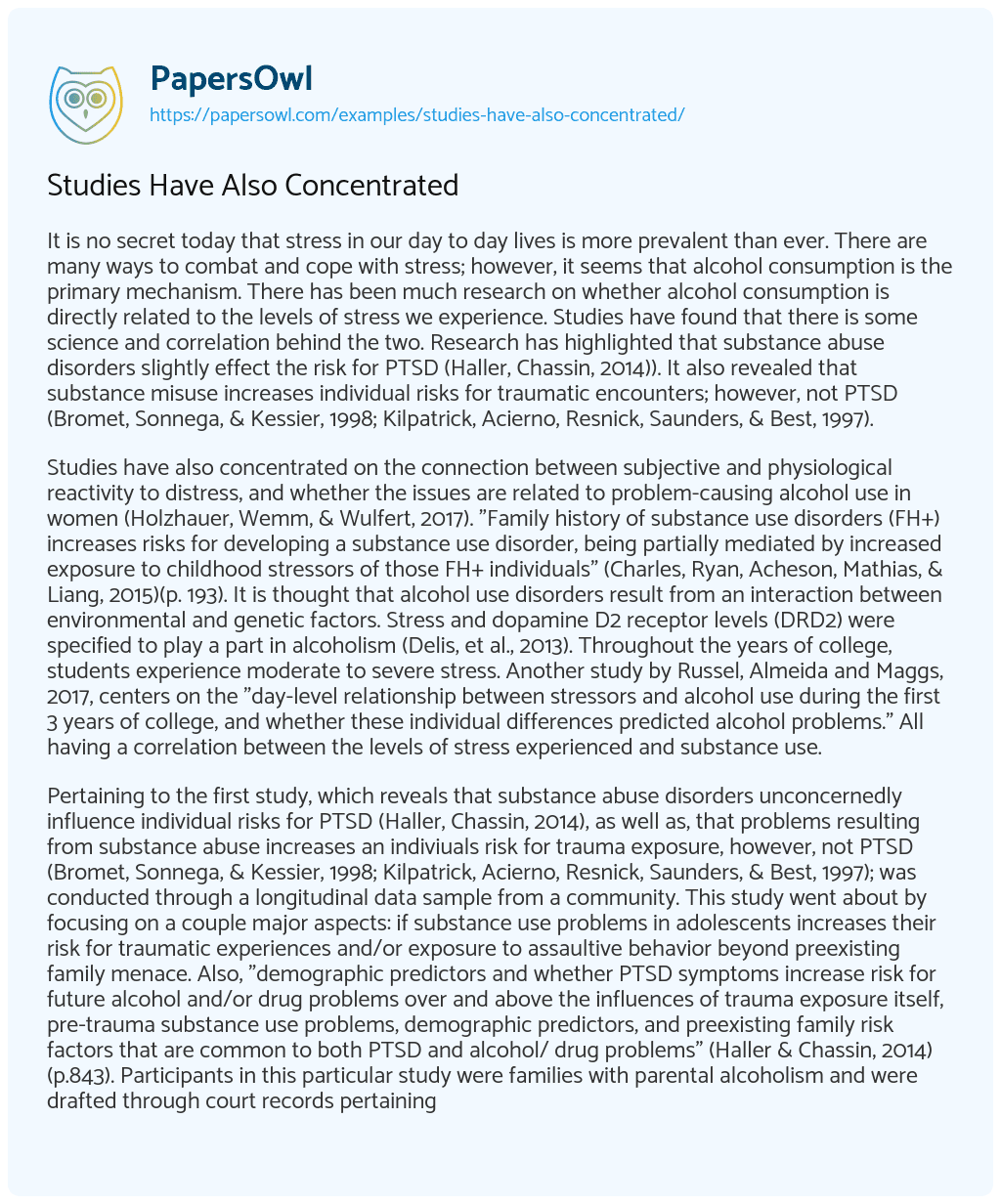 It is no secret today that stress in our day to day lives is more prevalent than ever. There are many ways to combat and cope with stress; however, it seems that alcohol consumption is the primary mechanism. There has been much research on whether alcohol consumption is directly related to the levels of stress we experience. Studies have found that there is some science and correlation behind the two. Research has highlighted that substance abuse disorders slightly effect the risk for PTSD (Haller, Chassin, 2014)). It also revealed that substance misuse increases individual risks for traumatic encounters; however, not PTSD (Bromet, Sonnega, & Kessier, 1998; Kilpatrick, Acierno, Resnick, Saunders, & Best, 1997).

Studies have also concentrated on the connection between subjective and physiological reactivity to distress, and whether the issues are related to problem-causing alcohol use in women (Holzhauer, Wemm, & Wulfert, 2017). “Family history of substance use disorders (FH+) increases risks for developing a substance use disorder, being partially mediated by increased exposure to childhood stressors of those FH+ individuals” (Charles, Ryan, Acheson, Mathias, & Liang, 2015)(p. 193). It is thought that alcohol use disorders result from an interaction between environmental and genetic factors. Stress and dopamine D2 receptor levels (DRD2) were specified to play a part in alcoholism (Delis, et al., 2013). Throughout the years of college, students experience moderate to severe stress. Another study by Russel, Almeida and Maggs, 2017, centers on the “day-level relationship between stressors and alcohol use during the first 3 years of college, and whether these individual differences predicted alcohol problems.” All having a correlation between the levels of stress experienced and substance use.

Pertaining to the first study, which reveals that substance abuse disorders unconcernedly influence individual risks for PTSD (Haller, Chassin, 2014), as well as, that problems resulting from substance abuse increases an indiviuals risk for trauma exposure, however, not PTSD (Bromet, Sonnega, & Kessier, 1998; Kilpatrick, Acierno, Resnick, Saunders, & Best, 1997); was conducted through a longitudinal data sample from a community. This study went about by focusing on a couple major aspects: if substance use problems in adolescents increases their risk for traumatic experiences and/or exposure to assaultive behavior beyond preexisting family menace. Also, “demographic predictors and whether PTSD symptoms increase risk for future alcohol and/or drug problems over and above the influences of trauma exposure itself, pre-trauma substance use problems, demographic predictors, and preexisting family risk factors that are common to both PTSD and alcohol/ drug problems” (Haller & Chassin, 2014)(p.843). Participants in this particular study were families with parental alcoholism and were drafted through court records pertaining to: DUI’s questionnaires and telephone surveys. Informed consent was provided.

It was found that males were more likely to be exposed to a traumatic event than females; however, trauma-exposed females presented greater levels of PTSD symptoms than those of the males (Haller & Chassin, 2014). Leading to, participants who experienced trauma in one form or another having drastically higher risks for later alcohol problems, those particularly in adulthood. Resulting, PTSD symptoms were not overwhelmingly correlated with adult alcohol problems (Haller & Chassin, 2014). The next study, fixated on the connection between subjective and physiological reactivity to distress, and whether the elements are related to problematic alcohol use in females (Holzhauer, Wemm, & Wulfert, 2017). The study was conducted by drawing 100 participants from two larger studies (Holzhauer, 2015). Thirty women, ages 18+ were drafted for the mixed gender study. Aspects of the study were measured by using a computerized paced auditory serial addition task, distress tolerance scale, skin conductance measurement, and a consequence questionnaire for young adults’ alcohol consumption. It was founded that physiological reactivity to distress was connected to ones’ drinking intensity, compared to subjective distress tolerance being linked with negative effects from the alcohol use (Holzhauer, Wemm, & Wulfert, 2017).

Charles, et al., 2015, founded that “FH+ children experience more significant stress than FH- children across a broad range of domains. Childhood exposure to stressors prospectively predicts early onset substance use. Suggesting that both FH+ and FH- children who experience high levels of stress are at increased risks for initiating substance use during early adolescence” (p.199). Ultimately, finding that many types of stressors accompanying early onset substance use were increased amongst FH+ children, suggesting that environmental stressors may be a mechanism in which a family history of substance use disorders increases one’s risk for developing substance misuse habits (Charles, et al., 2015). One of the most common elicits of drug abuse is stress, which potentially can to lead one to increased ETHO intake in order to lessen the “tension” (Greely & Oei, 1999; Keyes, Hatzenbuehler, & Hasin, 2011; Pohorecky, 1981).

Leading to, collaborations between environmental and genetic factors having the potential to develop alcohol use disorders as well. This was conducted using 157 adult male mice, lasting five weeks. They were divided into four groups: control, chronic mild stress (CMS), Ethanol only(ETOH), and CMS + ETOH. Concluding the five-week study, it was discovered the findings were in agreement with other studies which indicated “unavoidable/unpredictable stress affects ETHO consumption in a biphasic manner” (Chester, Blose, Zweifel, & Froelich, 2004; Clark, Fixaris, Belanger, & Rosenwasser, 2007; Deehan, Palmatier, Cain, & Kiefer, 2011; Rockman & Glavin, 1986; Ungless, Magill, & Bolam, 2004)(p.99). Also, coming to bargain that “animals with lower than normal DRD2 levels increase their ETOH consumption when exposed to stress and that animals with higher DRD2 levels have higher ETOH intake when they are not stressed” (Delis, et al., 2013).
The last study which focused on stressor-related drinking and future alcohol problems was conducted using a daily diary study of 744 first time college students. This began the fall of their first year and lasted through the fall of their fourth year. Students were invited through email to participate. This study disclosed that substantial “within-person, day-level association between stressors and drinking events suggested that on average students’ drinking odds significantly increased with each additional experienced stressor on a given day” (Russel, Almeida, & Maggs, 2017).
These studies all show relevance to what I intend on replicating, with the primary focus on: if a person experiences high levels of stress, then alcohol addiction is more likely to occur. Each study proses a different approach to conducting this research. These all provide solid information and are current data, within the last five years, that can be resourceful in comparing and knowing what to expect.

My Personal Experience of PTSD

PTSD and Coexisting Disorders in Children and Adolescents