Societies where Inequality is Dominant 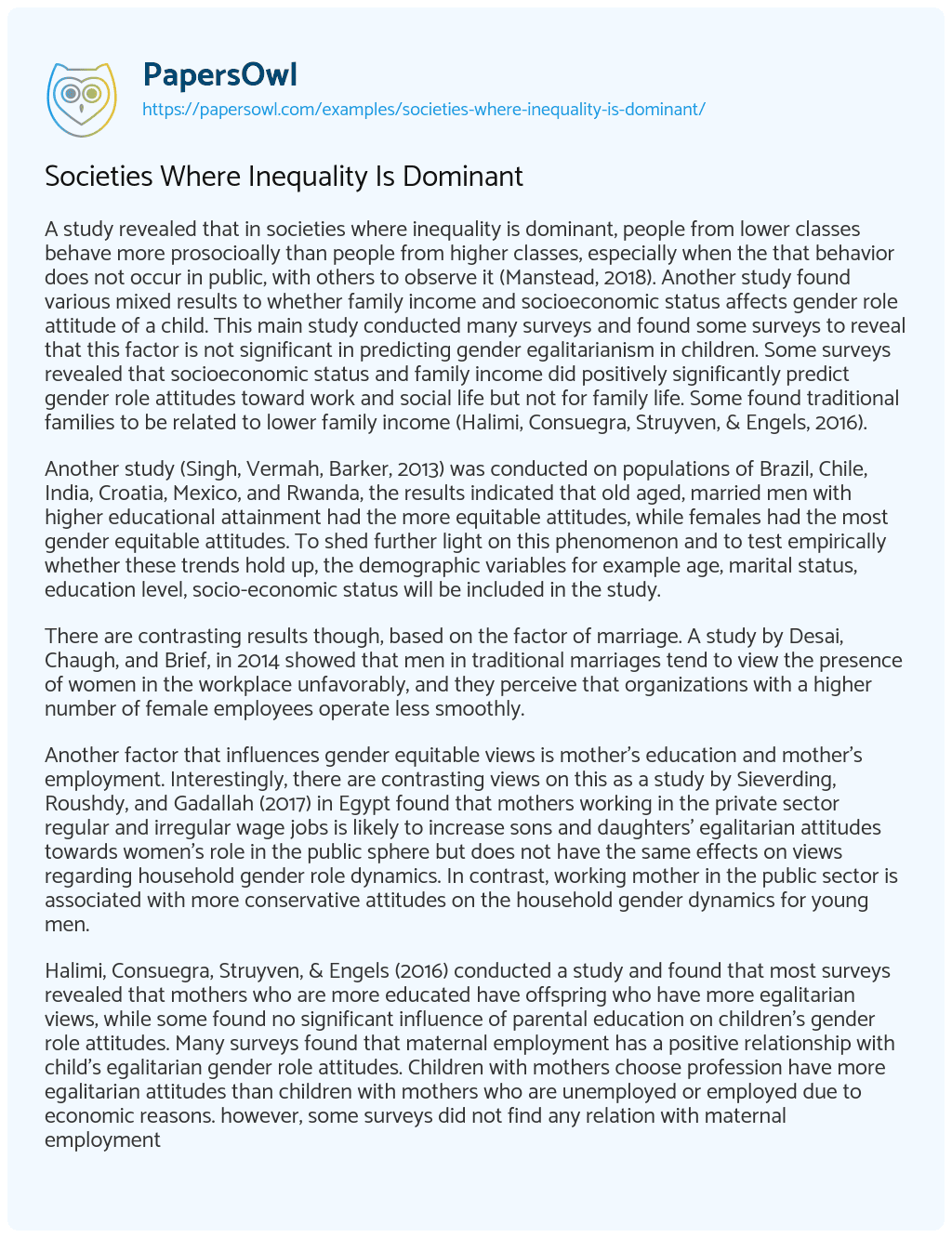 A study revealed that in societies where inequality is dominant, people from lower classes behave more prosocioally than people from higher classes, especially when the that behavior does not occur in public, with others to observe it (Manstead, 2018). Another study found various mixed results to whether family income and socioeconomic status affects gender role attitude of a child. This main study conducted many surveys and found some surveys to reveal that this factor is not significant in predicting gender egalitarianism in children. Some surveys revealed that socioeconomic status and family income did positively significantly predict gender role attitudes toward work and social life but not for family life. Some found traditional families to be related to lower family income (Halimi, Consuegra, Struyven, & Engels, 2016).

Another study (Singh, Vermah, Barker, 2013) was conducted on populations of Brazil, Chile, India, Croatia, Mexico, and Rwanda, the results indicated that old aged, married men with higher educational attainment had the more equitable attitudes, while females had the most gender equitable attitudes. To shed further light on this phenomenon and to test empirically whether these trends hold up, the demographic variables for example age, marital status, education level, socio-economic status will be included in the study.

There are contrasting results though, based on the factor of marriage. A study by Desai, Chaugh, and Brief, in 2014 showed that men in traditional marriages tend to view the presence of women in the workplace unfavorably, and they perceive that organizations with a higher number of female employees operate less smoothly.

Another factor that influences gender equitable views is mother’s education and mother’s employment. Interestingly, there are contrasting views on this as a study by Sieverding, Roushdy, and Gadallah (2017) in Egypt found that mothers working in the private sector regular and irregular wage jobs is likely to increase sons and daughters’ egalitarian attitudes towards women’s role in the public sphere but does not have the same effects on views regarding household gender role dynamics. In contrast, working mother in the public sector is associated with more conservative attitudes on the household gender dynamics for young men.

Halimi, Consuegra, Struyven, & Engels (2016) conducted a study and found that most surveys revealed that mothers who are more educated have offspring who have more egalitarian views, while some found no significant influence of parental education on children’s gender role attitudes. Many surveys found that maternal employment has a positive relationship with child’s egalitarian gender role attitudes. Children with mothers choose profession have more egalitarian attitudes than children with mothers who are unemployed or employed due to economic reasons. however, some surveys did not find any relation with maternal employment and gender role attitude. (same as prev)

Another factor that is likely to influence gender equitable views is the intake of fiction. This belief is based on Transportation Theory that suggests, when people read fiction, they are emotionally transported into the story and their empathy increases (Bal and Veltkamp, 2013). An experimental study (Bal and Veltkamp, 2013) was conducted to see whether fiction reading would increase the readers empathy, as compared to nonfiction reading. The results of this study stated that highly transported readers (readers who became highly involved in the text) of fictional text scored higher on empathy while highly transported readers of nonfictional text scored lower on empathy.

Societies Where Inequality Is Dominant. (2019, Jan 06). Retrieved from https://papersowl.com/examples/societies-where-inequality-is-dominant/

Rousseau about Inequality Among Men