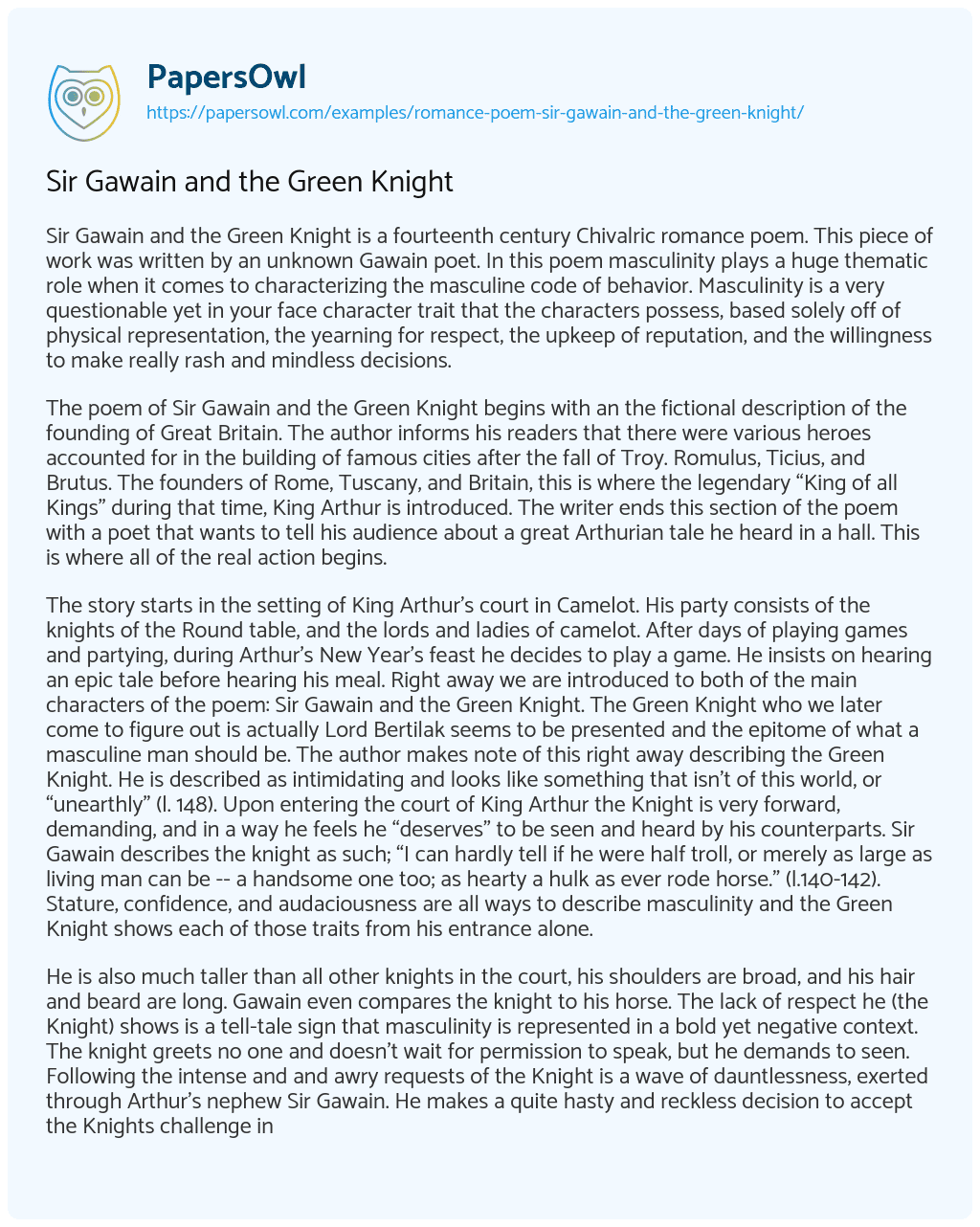 Sir Gawain and the Green Knight is a fourteenth century Chivalric romance poem. This piece of work was written by an unknown Gawain poet. In this poem masculinity plays a huge thematic role when it comes to characterizing the masculine code of behavior. Masculinity is a very questionable yet in your face character trait that the characters possess, based solely off of physical representation, the yearning for respect, the upkeep of reputation, and the willingness to make really rash and mindless decisions.

The poem of Sir Gawain and the Green Knight begins with an the fictional description of the founding of Great Britain. The author informs his readers that there were various heroes accounted for in the building of famous cities after the fall of Troy. Romulus, Ticius, and Brutus. The founders of Rome, Tuscany, and Britain, this is where the legendary “King of all Kings” during that time, King Arthur is introduced. The writer ends this section of the poem with a poet that wants to tell his audience about a great Arthurian tale he heard in a hall. This is where all of the real action begins.

The story starts in the setting of King Arthur’s court in Camelot. His party consists of the knights of the Round table, and the lords and ladies of camelot. After days of playing games and partying, during Arthur’s New Year’s feast he decides to play a game. He insists on hearing an epic tale before hearing his meal. Right away we are introduced to both of the main characters of the poem: Sir Gawain and the Green Knight. The Green Knight who we later come to figure out is actually Lord Bertilak seems to be presented and the epitome of what a masculine man should be. The author makes note of this right away describing the Green Knight. He is described as intimidating and looks like something that isn’t of this world, or “unearthly” (l. 148). Upon entering the court of King Arthur the Knight is very forward, demanding, and in a way he feels he “deserves” to be seen and heard by his counterparts. Sir Gawain describes the knight as such; “I can hardly tell if he were half troll, or merely as large as living man can be — a handsome one too; as hearty a hulk as ever rode horse.” (l.140-142). Stature, confidence, and audaciousness are all ways to describe masculinity and the Green Knight shows each of those traits from his entrance alone.

He is also much taller than all other knights in the court, his shoulders are broad, and his hair and beard are long. Gawain even compares the knight to his horse. The lack of respect he (the Knight) shows is a tell-tale sign that masculinity is represented in a bold yet negative context. The knight greets no one and doesn’t wait for permission to speak, but he demands to seen. Following the intense and and awry requests of the Knight is a wave of dauntlessness, exerted through Arthur’s nephew Sir Gawain. He makes a quite hasty and reckless decision to accept the Knights challenge in order to prove himself as a noble, worthy, and loyal adversary to King Arthur. With that being said this is also where Sir Gawain rise to greatness begins.

The challenge being bestowed upon court is the perfect example of toxic traits being possessed by these characters. The Green Knight s ona mission to prove that he is more of a man than Gawain, and not just his equal. As it is presented above one can only come to the conclusion that although the Knight was less of a man in a physical sense, he could still hold onto his word and his pride.

As we continue throughout the text Sir Gawain’s virtues, and moral rights are tested, by a feminine figure, Lady Bertilak. Her character is quite an anomaly in this text, she is given the most power in the text when it comes to the role of a woman and she uses her sexuality and feminine woes to gain the upperhand against that of a man. She is flirtatious and tempting to Gawain’s character and is constantly testing his ideals. There is an equal sense of shared femininity and masculinity in the overall plot of the story simply stating that men will always think with their bodies and heart before their heads. Men will also always be much more easy to persuade because they are more focused on their physical strength rather than their intelligence.

Sir Gawain and the Green Knight. (2020, Apr 16). Retrieved from https://papersowl.com/examples/romance-poem-sir-gawain-and-the-green-knight/

The Color Symbolism in Sir Gawain and the Green Knight

Gawain and the Green Knight