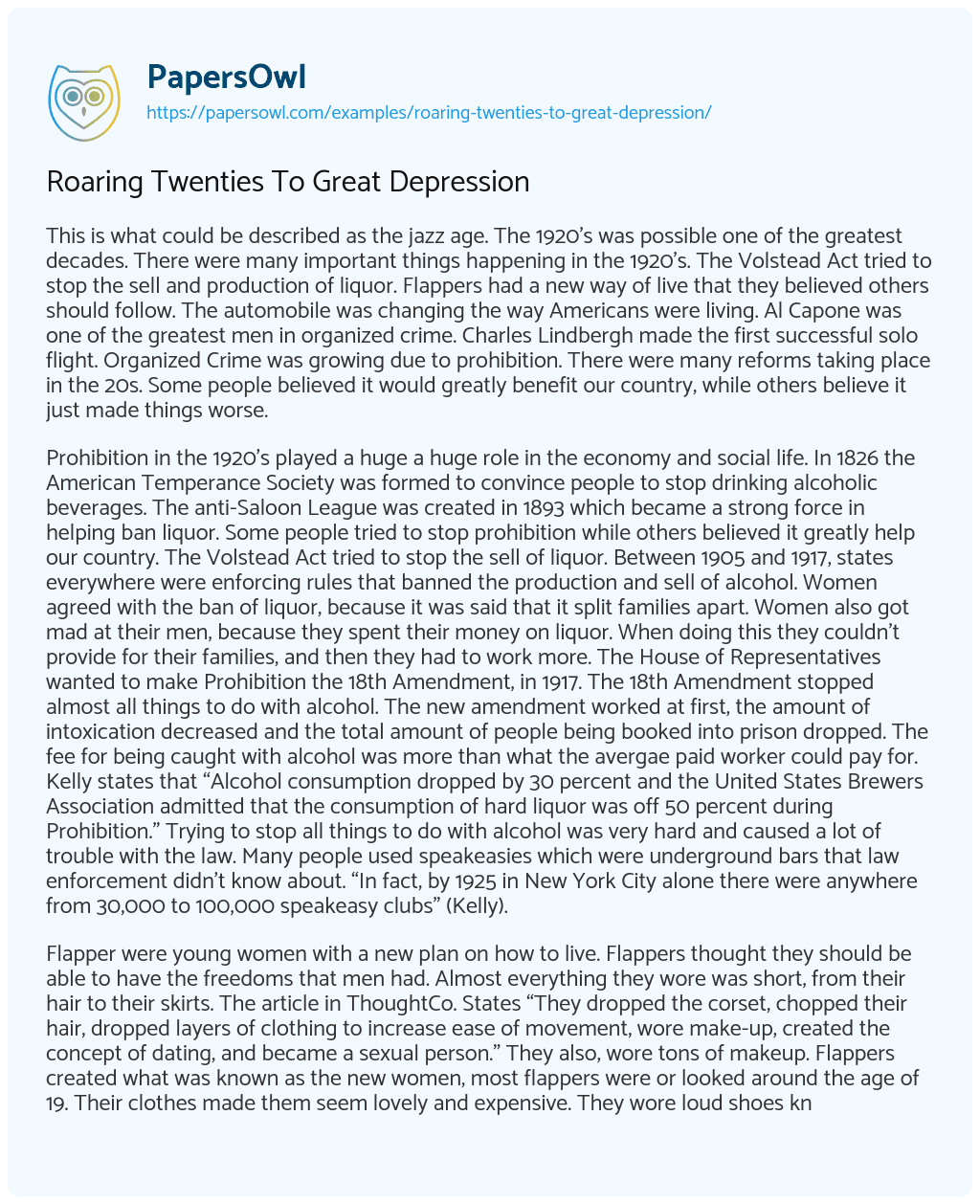 This is what could be described as the jazz age. The 1920’s was possible one of the greatest decades. There were many important things happening in the 1920’s. The Volstead Act tried to stop the sell and production of liquor. Flappers had a new way of live that they believed others should follow. The automobile was changing the way Americans were living. Al Capone was one of the greatest men in organized crime. Charles Lindbergh made the first successful solo flight. Organized Crime was growing due to prohibition. There were many reforms taking place in the 20s. Some people believed it would greatly benefit our country, while others believe it just made things worse.

Prohibition in the 1920’s played a huge a huge role in the economy and social life. In 1826 the American Temperance Society was formed to convince people to stop drinking alcoholic beverages. The anti-Saloon League was created in 1893 which became a strong force in helping ban liquor. Some people tried to stop prohibition while others believed it greatly help our country. The Volstead Act tried to stop the sell of liquor. Between 1905 and 1917, states everywhere were enforcing rules that banned the production and sell of alcohol. Women agreed with the ban of liquor, because it was said that it split families apart. Women also got mad at their men, because they spent their money on liquor. When doing this they couldn’t provide for their families, and then they had to work more. The House of Representatives wanted to make Prohibition the 18th Amendment, in 1917. The 18th Amendment stopped almost all things to do with alcohol. The new amendment worked at first, the amount of intoxication decreased and the total amount of people being booked into prison dropped. The fee for being caught with alcohol was more than what the avergae paid worker could pay for. Kelly states that “Alcohol consumption dropped by 30 percent and the United States Brewers Association admitted that the consumption of hard liquor was off 50 percent during Prohibition.” Trying to stop all things to do with alcohol was very hard and caused a lot of trouble with the law. Many people used speakeasies which were underground bars that law enforcement didn’t know about. “In fact, by 1925 in New York City alone there were anywhere from 30,000 to 100,000 speakeasy clubs” (Kelly).

Flapper were young women with a new plan on how to live. Flappers thought they should be able to have the freedoms that men had. Almost everything they wore was short, from their hair to their skirts. The article in ThoughtCo. States “They dropped the corset, chopped their hair, dropped layers of clothing to increase ease of movement, wore make-up, created the concept of dating, and became a sexual person.” They also, wore tons of makeup. Flappers created what was known as the new women, most flappers were or looked around the age of 19. Their clothes made them seem lovely and expensive. They wore loud shoes known as galoshes. Most people thought their shoes made a flapping sound while they walked. Flappers had a prestigious image, and a spunky attitude. In order to help them move freely, clothing was drastically reduced in weight and coverage. Most flappers had a bob haircut, that then turned into what was known as the shingle cut. Flappers also, started to wear make-up which had not previously been wore by many women. Flappers were risk takers and very reckless. Flapper women started smoking, although men were the only people that had smoked before. Being more rebellious than ever, flappers started drinking alcohol. Some flappers carried full flasks, so that wherever they were they, had liquor with them. A very popular pastime for them included dancing. The dances fit young flappers fast-paced way of life, some flappers drove Henry Ford’s new automobiles. The cars were perfect for flappers, because they were swift and dangerous. They fit the flapper’s funky personality. Very few people weren’t offended by flappers revealing outfits. A more modest version became popular among women. The Great Depression enforced new rules that ended flappers reckless behavior.

Organized crime grew because, of prohibition. Al Capone was one of the greatest crime organizers of this era. He quit school at 12 and then worked in a bowling alley. It was also, around this time that he goin a gang. Around 18 years old he moved his crime to Chicago. The outside world called him “scarface” which was a nickname he hated. Al Capone once sold alcohol to speakeasies, during prohibition. He organized the St. Valentine’s Day Massacre and himself killed at least 4 people. In total he made over $100 million every year. “Gangsters murdered anybody who got in their way.”(Feinstein) To a lot of people considered gangsters heroic defiant figures. The worst day approached us in 1929 St.Valentine’s Day. Al Capone ordered his men to kill. They killed 7 men and tried to kill more. Bootleggers are people who wear really tall boots in order to put their favorite liquor down there boots. In doing this, it ensured that they always had liquor with them. Most of the time they did not get caught with it, which was a great thing for them seeing as it was the time of prohibition.

The 1920’s changed the way Americans would live forever. The 18th Amendment was passed which stopped the sell and production of all alcohol. Flappers had a new way of life, they made themselves look very expensive. The automobile helped many americans better themselves in their jobs. Charles Lindbergh was very successful with the airplane. Their was also, a huge outbreak in organized crime. Al Capone was one of the greatest gangsters of all time. All these things lead to great changes which has shaped the way we live today. The 1920’s will forever remain as one of the greatest decades.

The Great Gatsby and Prohibition