Review on Gandhi Letter to Hitler 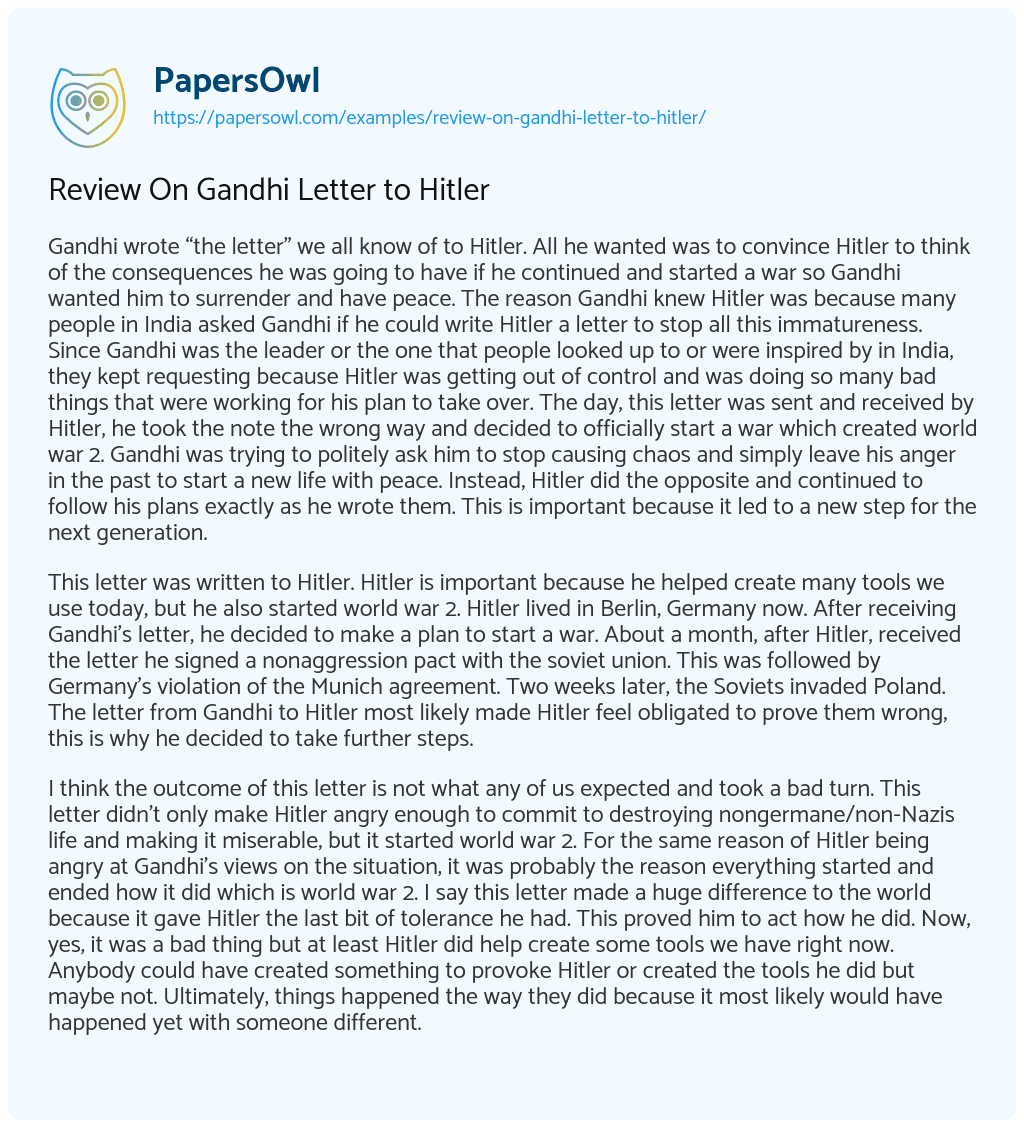 Gandhi wrote “the letter” we all know of to Hitler. All he wanted was to convince Hitler to think of the consequences he was going to have if he continued and started a war so Gandhi wanted him to surrender and have peace. The reason Gandhi knew Hitler was because many people in India asked Gandhi if he could write Hitler a letter to stop all this immatureness. Since Gandhi was the leader or the one that people looked up to or were inspired by in India, they kept requesting because Hitler was getting out of control and was doing so many bad things that were working for his plan to take over. The day, this letter was sent and received by Hitler, he took the note the wrong way and decided to officially start a war which created world war 2. Gandhi was trying to politely ask him to stop causing chaos and simply leave his anger in the past to start a new life with peace. Instead, Hitler did the opposite and continued to follow his plans exactly as he wrote them. This is important because it led to a new step for the next generation.

This letter was written to Hitler. Hitler is important because he helped create many tools we use today, but he also started world war 2. Hitler lived in Berlin, Germany now. After receiving Gandhi’s letter, he decided to make a plan to start a war. About a month, after Hitler, received the letter he signed a nonaggression pact with the soviet union. This was followed by Germany’s violation of the Munich agreement. Two weeks later, the Soviets invaded Poland. The letter from Gandhi to Hitler most likely made Hitler feel obligated to prove them wrong, this is why he decided to take further steps.

I think the outcome of this letter is not what any of us expected and took a bad turn. This letter didn’t only make Hitler angry enough to commit to destroying nongermane/non-Nazis life and making it miserable, but it started world war 2. For the same reason of Hitler being angry at Gandhi’s views on the situation, it was probably the reason everything started and ended how it did which is world war 2. I say this letter made a huge difference to the world because it gave Hitler the last bit of tolerance he had. This proved him to act how he did. Now, yes, it was a bad thing but at least Hitler did help create some tools we have right now. Anybody could have created something to provoke Hitler or created the tools he did but maybe not. Ultimately, things happened the way they did because it most likely would have happened yet with someone different.

Review On Gandhi Letter to Hitler. (2021, Feb 27). Retrieved from https://papersowl.com/examples/review-on-gandhi-letter-to-hitler/