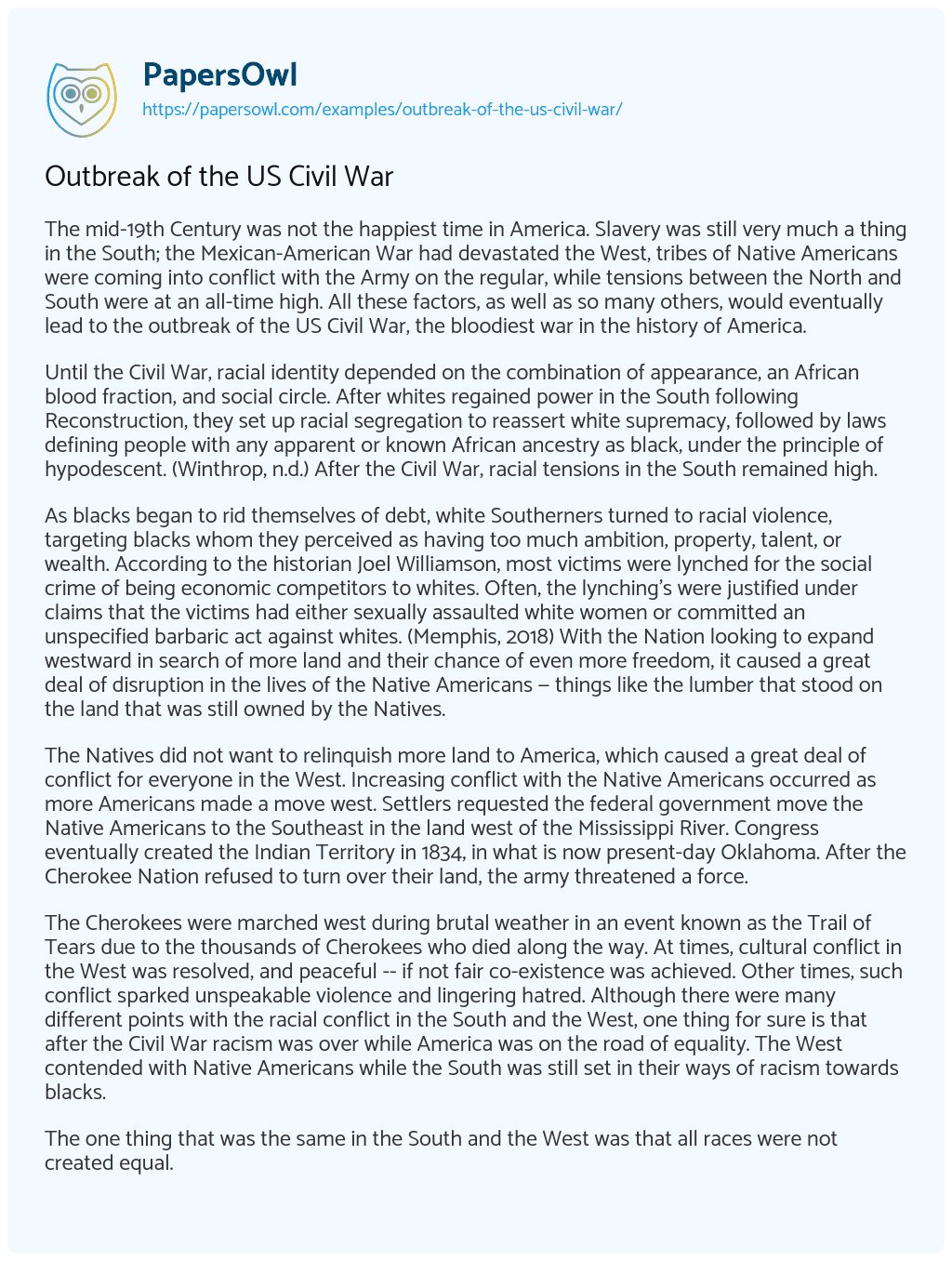 The mid-19th Century was not the happiest time in America. Slavery was still very much a thing in the South; the Mexican-American War had devastated the West, tribes of Native Americans were coming into conflict with the Army on the regular, while tensions between the North and South were at an all-time high. All these factors, as well as so many others, would eventually lead to the outbreak of the US Civil War, the bloodiest war in the history of America.

Until the Civil War, racial identity depended on the combination of appearance, an African blood fraction, and social circle. After whites regained power in the South following Reconstruction, they set up racial segregation to reassert white supremacy, followed by laws defining people with any apparent or known African ancestry as black, under the principle of hypodescent. (Winthrop, n.d.) After the Civil War, racial tensions in the South remained high.

As blacks began to rid themselves of debt, white Southerners turned to racial violence, targeting blacks whom they perceived as having too much ambition, property, talent, or wealth. According to the historian Joel Williamson, most victims were lynched for the social crime of being economic competitors to whites. Often, the lynching’s were justified under claims that the victims had either sexually assaulted white women or committed an unspecified barbaric act against whites. (Memphis, 2018) With the Nation looking to expand westward in search of more land and their chance of even more freedom, it caused a great deal of disruption in the lives of the Native Americans — things like the lumber that stood on the land that was still owned by the Natives.

The Natives did not want to relinquish more land to America, which caused a great deal of conflict for everyone in the West. Increasing conflict with the Native Americans occurred as more Americans made a move west. Settlers requested the federal government move the Native Americans to the Southeast in the land west of the Mississippi River. Congress eventually created the Indian Territory in 1834, in what is now present-day Oklahoma. After the Cherokee Nation refused to turn over their land, the army threatened a force.

The Cherokees were marched west during brutal weather in an event known as the Trail of Tears due to the thousands of Cherokees who died along the way. At times, cultural conflict in the West was resolved, and peaceful — if not fair co-existence was achieved. Other times, such conflict sparked unspeakable violence and lingering hatred. Although there were many different points with the racial conflict in the South and the West, one thing for sure is that after the Civil War racism was over while America was on the road of equality. The West contended with Native Americans while the South was still set in their ways of racism towards blacks.

The one thing that was the same in the South and the West was that all races were not created equal. The west wanted nothing to do with Native Americans except to take their land. In the South blacks were no longer slaves but they were handicapped by state laws such as the Black Codes. Both areas of the Nation had their separate battles with race but, one thing they had in common was that they were wrong.

Outbreak of the US Civil War. (2021, Mar 26). Retrieved from https://papersowl.com/examples/outbreak-of-the-us-civil-war/

Racism and Civil Rights in the U.S