Organs of the Respiratory System 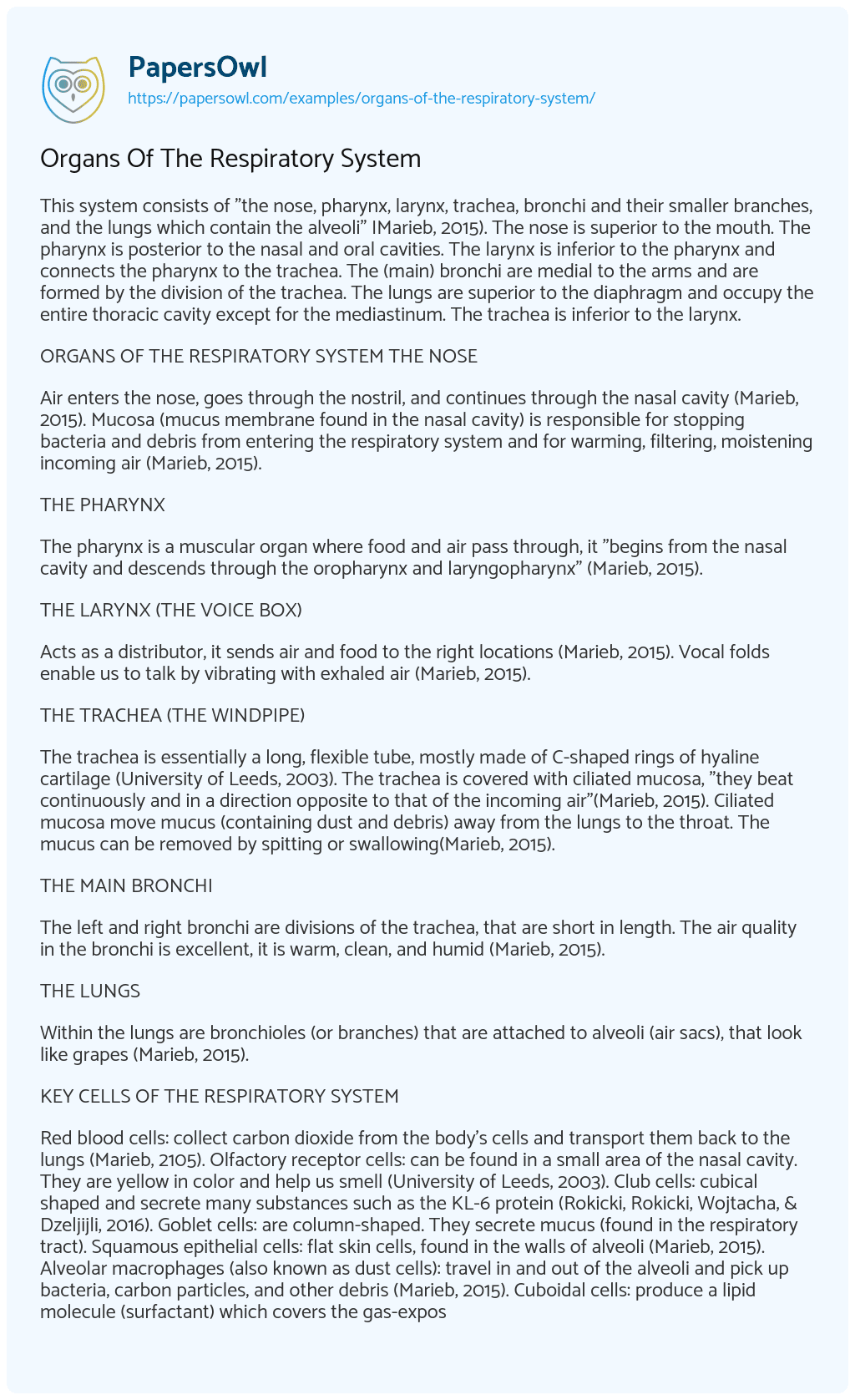 ORGANS OF THE RESPIRATORY SYSTEM THE NOSE

The pharynx is a muscular organ where food and air pass through, it “begins from the nasal cavity and descends through the oropharynx and laryngopharynx” (Marieb, 2015).

THE LARYNX (THE VOICE BOX)

Acts as a distributor, it sends air and food to the right locations (Marieb, 2015). Vocal folds enable us to talk by vibrating with exhaled air (Marieb, 2015).

THE TRACHEA (THE WINDPIPE)

The trachea is essentially a long, flexible tube, mostly made of C-shaped rings of hyaline cartilage (University of Leeds, 2003). The trachea is covered with ciliated mucosa, “they beat continuously and in a direction opposite to that of the incoming air”(Marieb, 2015). Ciliated mucosa move mucus (containing dust and debris) away from the lungs to the throat. The mucus can be removed by spitting or swallowing(Marieb, 2015).

The left and right bronchi are divisions of the trachea, that are short in length. The air quality in the bronchi is excellent, it is warm, clean, and humid (Marieb, 2015).

Within the lungs are bronchioles (or branches) that are attached to alveoli (air sacs), that look like grapes (Marieb, 2015).

KEY CELLS OF THE RESPIRATORY SYSTEM

Red blood cells: collect carbon dioxide from the body’s cells and transport them back to the lungs (Marieb, 2105). Olfactory receptor cells: can be found in a small area of the nasal cavity. They are yellow in color and help us smell (University of Leeds, 2003). Club cells: cubical shaped and secrete many substances such as the KL-6 protein (Rokicki, Rokicki, Wojtacha, & Dzeljijli, 2016). Goblet cells: are column-shaped. They secrete mucus (found in the respiratory tract). Squamous epithelial cells: flat skin cells, found in the walls of alveoli (Marieb, 2015). Alveolar macrophages (also known as dust cells): travel in and out of the alveoli and pick up bacteria, carbon particles, and other debris (Marieb, 2015). Cuboidal cells: produce a lipid molecule (surfactant) which covers the gas-exposed alveolar surfaces (Marieb, Alveolar type I and type II cells (found in the lungs). According to one study, “type 1 alveolar cells comprise the major gas exchange surface of the alveolus and are integral to the maintenance of the permeability barrier” (Gurka & Bulke, 2008).

THE RESPIRATORY AND CARDIOVASCULAR SYSTEMS

Both systems work together to make sure organ tissues receive enough oxygen (Lysis, 2018). The respiratory system organs ensure that gas exchanges happen between the blood and the external environment (Marieb, 2105). The cardiovascular system provides blood, “using blood as the transporting fluid, the cardiovascular organs transport respiratory gases between the lungs and the tissues cells” (Marieb, 2015). Gas exchange between tissues and blood is the main function of the circulatory system: Both systems work together to control acid balance of the blood (Marieb, 2105). Before carbon dioxide can diffuse out of the blood into the alveoli, it must be released from its bicarbonate ion form (Marieb, 2015). Bicarbonate ions must enter the red blood cells where they combine with hydrogen ions H+ to form carbonic acid H2CO3 (Marieb, 2015). Carbonic acid rapidly splits to form water and carbon dioxide, and carbon dioxide diffuses from the blood and enters the alveoli (Marieb, 2015).

The respiratory system allows oxygen to enter the body and while removing of carbon dioxide (Marieb, 2015). Oxygen must be delivered to all cells of the body to maintain equalibrium, to do this, “Oxygen travels across lung tissue into blood vessels and the blood carries the oxygen around the body” (Marieb, 2015). The circulatory system transports blood and other materials. It brings supplies (nutrients) to cells, carries away waste, and separates oxygen-poor and oxygen-rich blood. The respiratory system keeps the body constantly supplied with oxygen. White blood cells and chemicals in the blood help to protect the body from foreign invaders such as bacteria (Marieb, 2015). Neural centers that control respiratory rhythm and depth are located mainly in the medulla and pons of the brain (Marieb, 2015). Breathing centers are stimulated by CO?‚‚ which increase in blood (which acts directly on medulla centers by causing a drop in pH of cerebrospinal fluid (Marieb, 2015). A nerve impulse from CO?‚‚ sensor reveals CO?‚‚ decrease (Marieb, 2105). Changes in oxygen concentration in the blood are the peripheral chemoreceptor regions of the aorta (aortic arch) and the common carotid artery (carotid body). These organs send impulses to the medulla when blood oxygen levels are dropping (Marieb,2015).

DISEASES THAT AFFECT THE LUNGS EMPHYSEMA

Typically people who smoke cigarettes tend to develop emphysema. This disease starts to develop in people between the ages 40-60 (May Clinic, 2017). Chronic inflammation often leads to fibrosis of the lungs (scar tissue growing inside the lungs). The alveoli become overinflated, and the walls break down. People who have emphysema have a very difficult time breathing due to the decreased elastic quality of the lungs. The airways collapse during expiration and obstruct outflow of air (Marieb, 2015). Emphysema is caused by overdistention of the pulmonary alveoli and fibrosis of lung tissue (Marieb, 2015). Other causes include exposure to air pollution, airway reactivity, heredity, male sex, and age (Mayo clinic, 2107). About 3.5 million Americans have been diagnosed with emphysema. More than 90% of cases involve people over the age of 45 (Mayo Clinic, 2017). Chronic obstructive pulmonary disease (COPD) COPD is a chronic lung disease that makes it difficult for people to breathe (American lung association, 2018). Individuals usually have a history of smoking, dsypnea (difficult or labored breathing), coughing and frequent pulmonary infections, and most individuals with COPD hypoxic (retain carbon dioxide and have respiratory acidosis and usually develop respiratory failure) (Healthline, 2018). COPD may lead to respiratory infections, heart problems, lung cancer, high blood pressure in the lung arteries, and depression (Healthline, 2018). COPD is mainly caused by smoking. Heavy or long-term contact with second-hand smoke may also cause COPD. COPD affects 16 million Americans and millions more don’t know that they have it (Healthline, 2018). COPD is often preventable (by quitting smoking) and is treatable (American lung association, 2018). COPD is a common disease and is the third leading cause of death in the U.S. (American lung association, 2018).

Organs Of The Respiratory System. (2019, Apr 21). Retrieved from https://papersowl.com/examples/organs-of-the-respiratory-system/

Breathing is Main of the Respiratory System

The Anatomy of the Respiratory System and Asthma