On Period after Civil Rights Movement 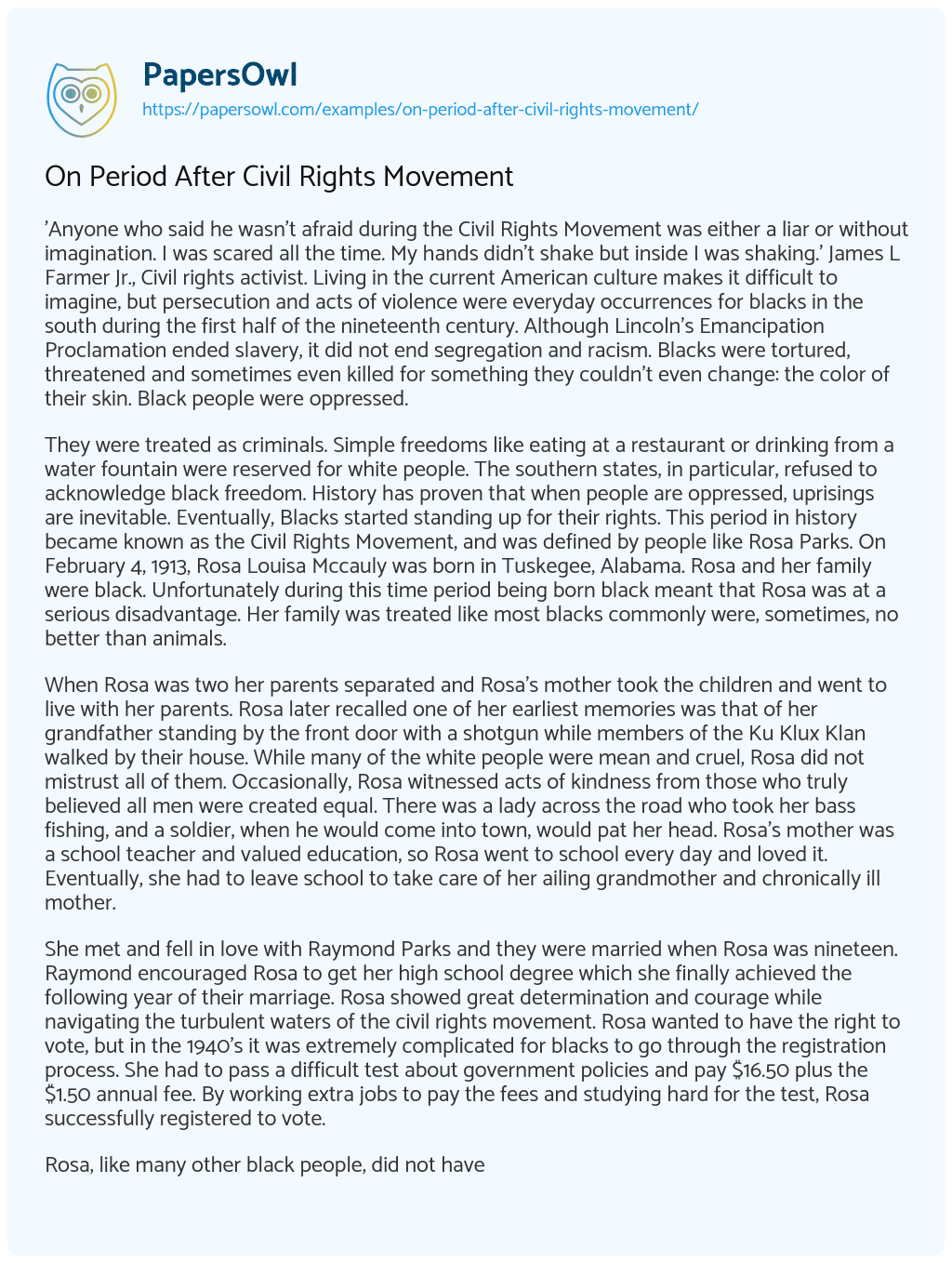 ‘Anyone who said he wasn’t afraid during the Civil Rights Movement was either a liar or without imagination. I was scared all the time. My hands didn’t shake but inside I was shaking.’ James L Farmer Jr., Civil rights activist. Living in the current American culture makes it difficult to imagine, but persecution and acts of violence were everyday occurrences for blacks in the south during the first half of the nineteenth century. Although Lincoln’s Emancipation Proclamation ended slavery, it did not end segregation and racism. Blacks were tortured, threatened and sometimes even killed for something they couldn’t even change: the color of their skin. Black people were oppressed.

They were treated as criminals. Simple freedoms like eating at a restaurant or drinking from a water fountain were reserved for white people. The southern states, in particular, refused to acknowledge black freedom. History has proven that when people are oppressed, uprisings are inevitable. Eventually, Blacks started standing up for their rights. This period in history became known as the Civil Rights Movement, and was defined by people like Rosa Parks. On February 4, 1913, Rosa Louisa Mccauly was born in Tuskegee, Alabama. Rosa and her family were black. Unfortunately during this time period being born black meant that Rosa was at a serious disadvantage. Her family was treated like most blacks commonly were, sometimes, no better than animals.

When Rosa was two her parents separated and Rosa’s mother took the children and went to live with her parents. Rosa later recalled one of her earliest memories was that of her grandfather standing by the front door with a shotgun while members of the Ku Klux Klan walked by their house. While many of the white people were mean and cruel, Rosa did not mistrust all of them. Occasionally, Rosa witnessed acts of kindness from those who truly believed all men were created equal. There was a lady across the road who took her bass fishing, and a soldier, when he would come into town, would pat her head. Rosa’s mother was a school teacher and valued education, so Rosa went to school every day and loved it. Eventually, she had to leave school to take care of her ailing grandmother and chronically ill mother.

She met and fell in love with Raymond Parks and they were married when Rosa was nineteen. Raymond encouraged Rosa to get her high school degree which she finally achieved the following year of their marriage. Rosa showed great determination and courage while navigating the turbulent waters of the civil rights movement. Rosa wanted to have the right to vote, but in the 1940’s it was extremely complicated for blacks to go through the registration process. She had to pass a difficult test about government policies and pay $16.50 plus the $1.50 annual fee. By working extra jobs to pay the fees and studying hard for the test, Rosa successfully registered to vote.

Rosa, like many other black people, did not have her own car. She relied on the cheap, public transportation. One day, like every other, she left her job as a seamstress, paid her fare and boarded a bus home. Buses were segregated and Rosa was required to sit in the section for black people. Although Rosa obeyed the rules, seating in the white section soon filled up until no seats were left. When a white man boarded the bus the bus driver demanded Rosa to get up and let the man sit in her seat. Rosa refused. She was ordered again to give up her seat and when she refused a second time, she was arrested.

After her release from jail, Rosa was so infuriated that she organized a boycott of the bus system. No blacks rode the buses for over a year. The boycott ended with the supreme court ruling that segregation on buses is unconstitutional. As she grew older Rosa was recognized for her work in the Civil Rights Movement. President Clinton awarded her the Presidential Medal of Freedom and the Congressional Gold Medal. Congress called her the First Lady of Civil Rights. By not standing up on the bus Rosa Parks was speaking out against discrimination for all people. Although racism is still existent, the Civil Rights movement helped weaken the prejudices against minorities. Rosa Parks left a legacy of courage and determination for those still experiencing the effect

On Period After Civil Rights Movement. (2022, Feb 11). Retrieved from https://papersowl.com/examples/on-period-after-civil-rights-movement/