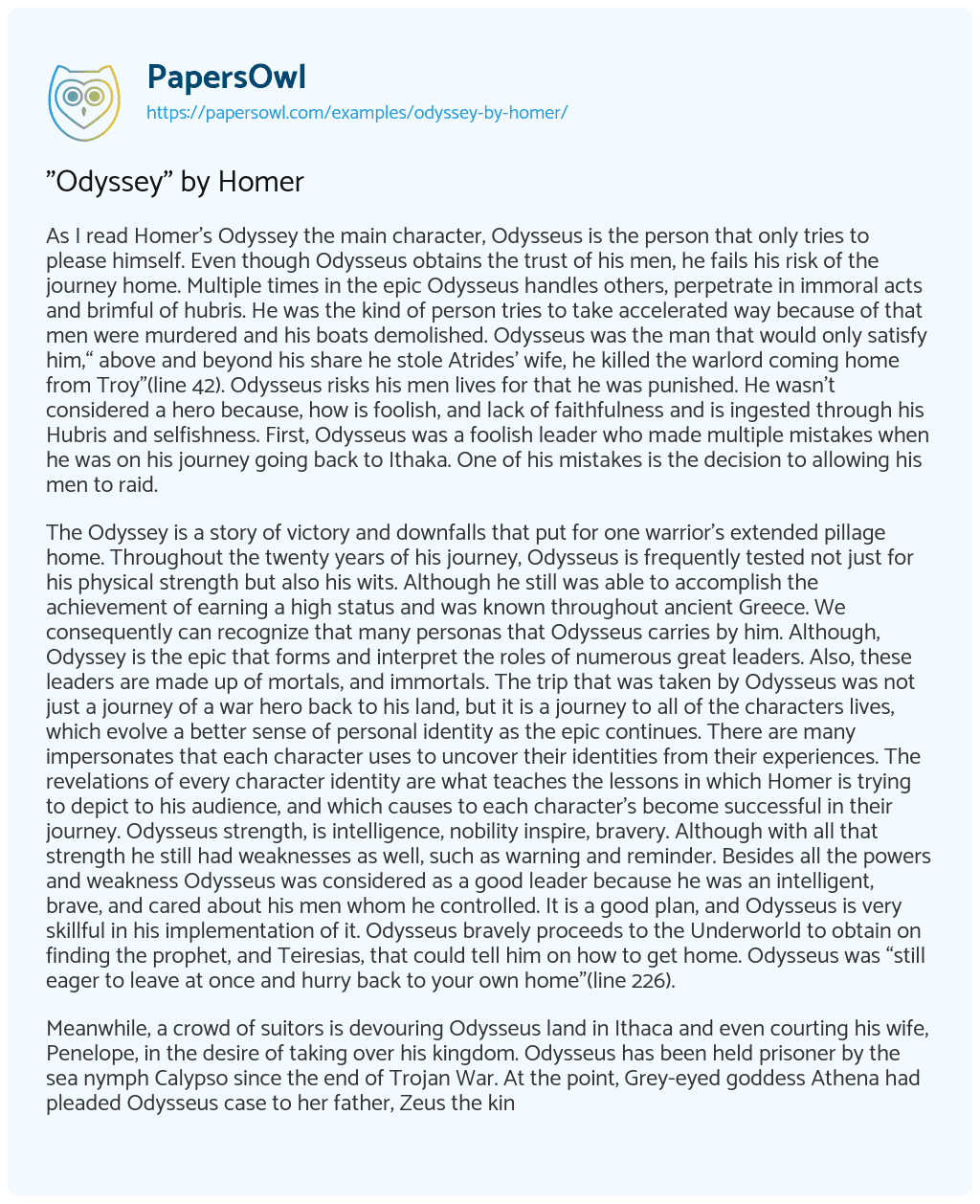 As I read Homer’s Odyssey the main character, Odysseus is the person that only tries to please himself. Even though Odysseus obtains the trust of his men, he fails his risk of the journey home. Multiple times in the epic Odysseus handles others, perpetrate in immoral acts and brimful of hubris. He was the kind of person tries to take accelerated way because of that men were murdered and his boats demolished. Odysseus was the man that would only satisfy him,“ above and beyond his share he stole Atrides’ wife, he killed the warlord coming home from Troy”(line 42). Odysseus risks his men lives for that he was punished. He wasn’t considered a hero because, how is foolish, and lack of faithfulness and is ingested through his Hubris and selfishness. First, Odysseus was a foolish leader who made multiple mistakes when he was on his journey going back to Ithaka. One of his mistakes is the decision to allowing his men to raid.

The Odyssey is a story of victory and downfalls that put for one warrior’s extended pillage home. Throughout the twenty years of his journey, Odysseus is frequently tested not just for his physical strength but also his wits. Although he still was able to accomplish the achievement of earning a high status and was known throughout ancient Greece. We consequently can recognize that many personas that Odysseus carries by him. Although, Odyssey is the epic that forms and interpret the roles of numerous great leaders. Also, these leaders are made up of mortals, and immortals. The trip that was taken by Odysseus was not just a journey of a war hero back to his land, but it is a journey to all of the characters lives, which evolve a better sense of personal identity as the epic continues. There are many impersonates that each character uses to uncover their identities from their experiences. The revelations of every character identity are what teaches the lessons in which Homer is trying to depict to his audience, and which causes to each character’s become successful in their journey. Odysseus strength, is intelligence, nobility inspire, bravery. Although with all that strength he still had weaknesses as well, such as warning and reminder. Besides all the powers and weakness Odysseus was considered as a good leader because he was an intelligent, brave, and cared about his men whom he controlled. It is a good plan, and Odysseus is very skillful in his implementation of it. Odysseus bravely proceeds to the Underworld to obtain on finding the prophet, and Teiresias, that could tell him on how to get home. Odysseus was “still eager to leave at once and hurry back to your own home”(line 226).

Meanwhile, a crowd of suitors is devouring Odysseus land in Ithaca and even courting his wife, Penelope, in the desire of taking over his kingdom. Odysseus has been held prisoner by the sea nymph Calypso since the end of Trojan War. At the point, Grey-eyed goddess Athena had pleaded Odysseus case to her father, Zeus the king of all gods, earlier in the poem. To notwithstanding her pleading, however, Odysseus stays captive at the beginning of Book 5.

“Great War Hero” in the Odyssey by Homer

Theme of Leadership in “The Odyssey” by Homer