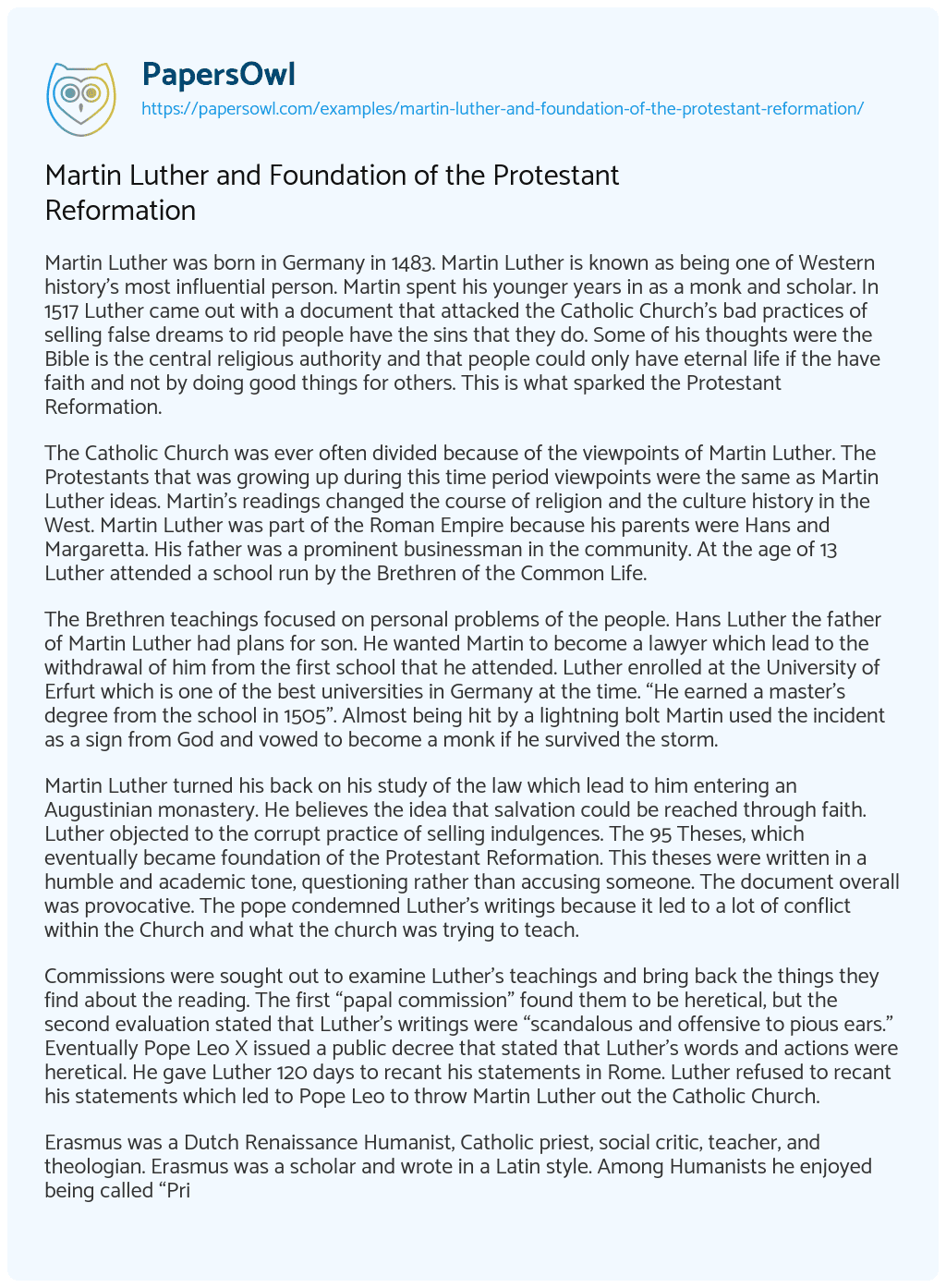 Martin Luther was born in Germany in 1483. Martin Luther is known as being one of Western history’s most influential person. Martin spent his younger years in as a monk and scholar. In 1517 Luther came out with a document that attacked the Catholic Church’s bad practices of selling false dreams to rid people have the sins that they do. Some of his thoughts were the Bible is the central religious authority and that people could only have eternal life if the have faith and not by doing good things for others. This is what sparked the Protestant Reformation.

The Catholic Church was ever often divided because of the viewpoints of Martin Luther. The Protestants that was growing up during this time period viewpoints were the same as Martin Luther ideas. Martin’s readings changed the course of religion and the culture history in the West. Martin Luther was part of the Roman Empire because his parents were Hans and Margaretta. His father was a prominent businessman in the community. At the age of 13 Luther attended a school run by the Brethren of the Common Life.

The Brethren teachings focused on personal problems of the people. Hans Luther the father of Martin Luther had plans for son. He wanted Martin to become a lawyer which lead to the withdrawal of him from the first school that he attended. Luther enrolled at the University of Erfurt which is one of the best universities in Germany at the time. “He earned a master’s degree from the school in 1505”. Almost being hit by a lightning bolt Martin used the incident as a sign from God and vowed to become a monk if he survived the storm.

Martin Luther turned his back on his study of the law which lead to him entering an Augustinian monastery. He believes the idea that salvation could be reached through faith. Luther objected to the corrupt practice of selling indulgences. The 95 Theses, which eventually became foundation of the Protestant Reformation. This theses were written in a humble and academic tone, questioning rather than accusing someone. The document overall was provocative. The pope condemned Luther’s writings because it led to a lot of conflict within the Church and what the church was trying to teach.

Commissions were sought out to examine Luther’s teachings and bring back the things they find about the reading. The first “papal commission” found them to be heretical, but the second evaluation stated that Luther’s writings were “scandalous and offensive to pious ears.” Eventually Pope Leo X issued a public decree that stated that Luther’s words and actions were heretical. He gave Luther 120 days to recant his statements in Rome. Luther refused to recant his statements which led to Pope Leo to throw Martin Luther out the Catholic Church.

Erasmus was a Dutch Renaissance Humanist, Catholic priest, social critic, teacher, and theologian. Erasmus was a scholar and wrote in a Latin style. Among Humanists he enjoyed being called “Prince of the Humanists,”. Using Humanist techniques for working on texts, he prepared important new Latin and Greek editions of the New Testament so people could read and learn. Erasmus lived in the era during the growing European religious Reformation. He was critical of the bad things going on within the Catholic church and called for reform. He didn’t associate with Martin Luther and Melanchthon and continued to have faith in the pope, He had respect for traditional faith, piety, and grace, which lead to him rejecting Martin Luther on faith alone.

Erasmus was a member of the Catholic church until the day he died. He stayed because he wanted to change the church within by getting rid of the people or things that abused it. Erasmus always wanted to live his life as an independent scholar. This led to him being conscious by not being around the wrong influences or people that could mess up his freedom and life. Erasmus stated that a love of peace was needed in order to be a Christian. Erasmus wasn’t assertive when it came to be the leader of men and women. He rather fight the enemy with words because that’s what he grew up knowing. He didn’t stand a chance when it came to be on Martin Luther: level he did not lead the Reformation.

Martin Luther and Foundation of the Protestant Reformation. (2021, May 10). Retrieved from https://papersowl.com/examples/martin-luther-and-foundation-of-the-protestant-reformation/

Martin Luther and the Reformation