Male Workers during the Great Depression 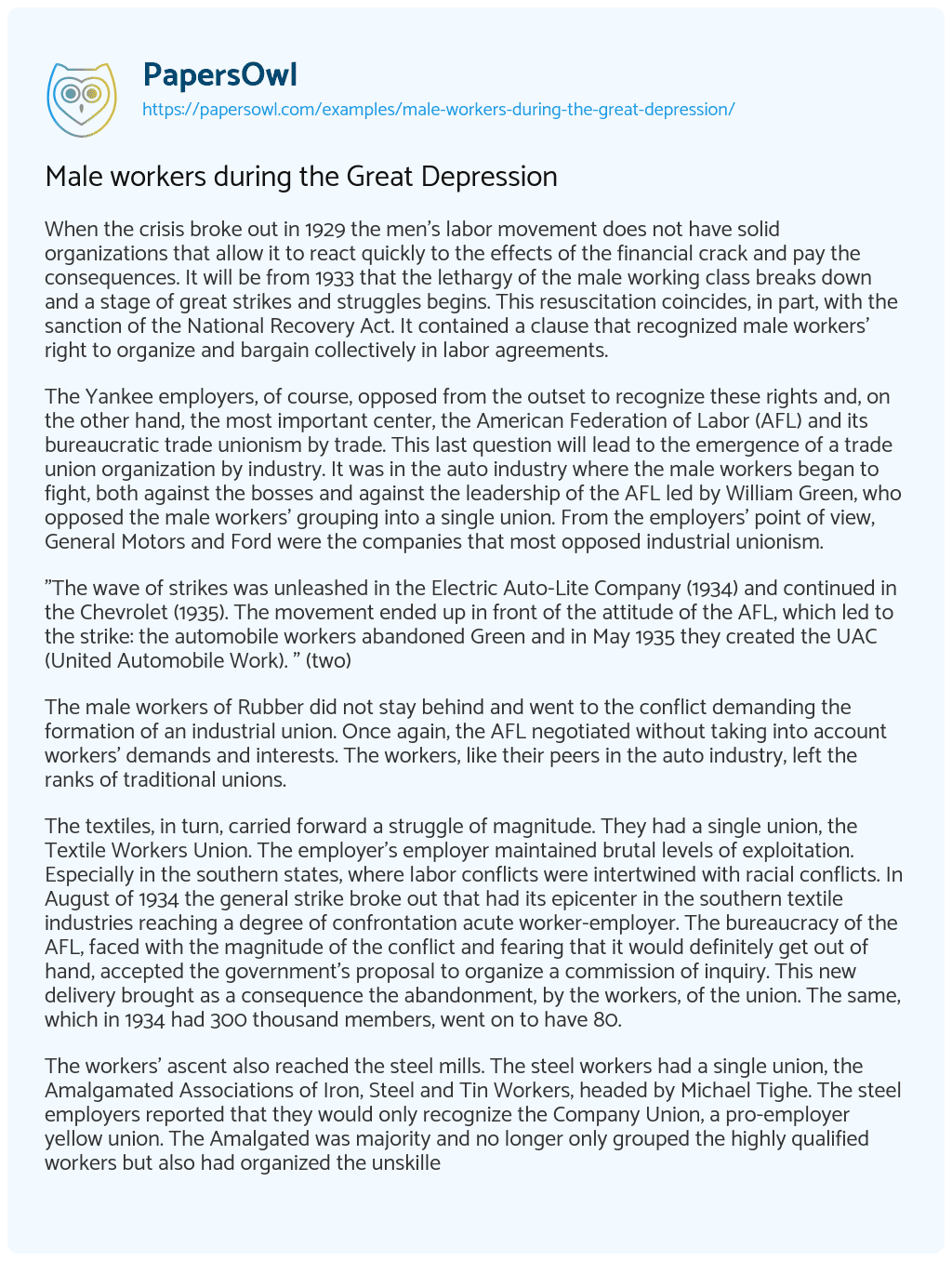 When the crisis broke out in 1929 the men’s labor movement does not have solid organizations that allow it to react quickly to the effects of the financial crack and pay the consequences. It will be from 1933 that the lethargy of the male working class breaks down and a stage of great strikes and struggles begins. This resuscitation coincides, in part, with the sanction of the National Recovery Act. It contained a clause that recognized male workers’ right to organize and bargain collectively in labor agreements.

The Yankee employers, of course, opposed from the outset to recognize these rights and, on the other hand, the most important center, the American Federation of Labor (AFL) and its bureaucratic trade unionism by trade. This last question will lead to the emergence of a trade union organization by industry. It was in the auto industry where the male workers began to fight, both against the bosses and against the leadership of the AFL led by William Green, who opposed the male workers’ grouping into a single union. From the employers’ point of view, General Motors and Ford were the companies that most opposed industrial unionism.

“The wave of strikes was unleashed in the Electric Auto-Lite Company (1934) and continued in the Chevrolet (1935). The movement ended up in front of the attitude of the AFL, which led to the strike: the automobile workers abandoned Green and in May 1935 they created the UAC (United Automobile Work). ” (two)

The male workers of Rubber did not stay behind and went to the conflict demanding the formation of an industrial union. Once again, the AFL negotiated without taking into account workers’ demands and interests. The workers, like their peers in the auto industry, left the ranks of traditional unions.

The textiles, in turn, carried forward a struggle of magnitude. They had a single union, the Textile Workers Union. The employer’s employer maintained brutal levels of exploitation. Especially in the southern states, where labor conflicts were intertwined with racial conflicts. In August of 1934 the general strike broke out that had its epicenter in the southern textile industries reaching a degree of confrontation acute worker-employer. The bureaucracy of the AFL, faced with the magnitude of the conflict and fearing that it would definitely get out of hand, accepted the government’s proposal to organize a commission of inquiry. This new delivery brought as a consequence the abandonment, by the workers, of the union. The same, which in 1934 had 300 thousand members, went on to have 80.

The workers’ ascent also reached the steel mills. The steel workers had a single union, the Amalgamated Associations of Iron, Steel and Tin Workers, headed by Michael Tighe. The steel employers reported that they would only recognize the Company Union, a pro-employer yellow union. The Amalgated was majority and no longer only grouped the highly qualified workers but also had organized the unskilled. This sector, very combative, was the one that overflowed the direction of the union. Within the Amalgated, the Grassroots Movement had been organized, bringing together the most combative elements who were pressing to go on strike. Tighe is going to negotiate with the government accepting the proposal of the same one and shortly after it is going to expel from the union the components of the Base Movement.

The dockers, in 1934. are going to claim for the clause that stipulated the right to organize and collective bargaining. This movement had the support of the truckers union. The police harshly repressed dockers and drivers and the San Francisco Union of Trade Unions declared the strike. Green and the AFL disavowed the measure. And despite the police repression and the pressures of the bureaucracy, the claim was consolidated. In this way, the Maritime Federation of the Pacific was formed, independent of the AFL, which grouped together port and mariners.

Male workers during the Great Depression. (2019, Mar 08). Retrieved from https://papersowl.com/examples/male-workers-during-the-great-depression/

Why was Herbert Hoover Blamed for the Great Depression?

Argentina and the Great Depression

How could the Great Depression been Pre Tive