Literacy as a Path Trough Adversity: Life of Frederick Douglass 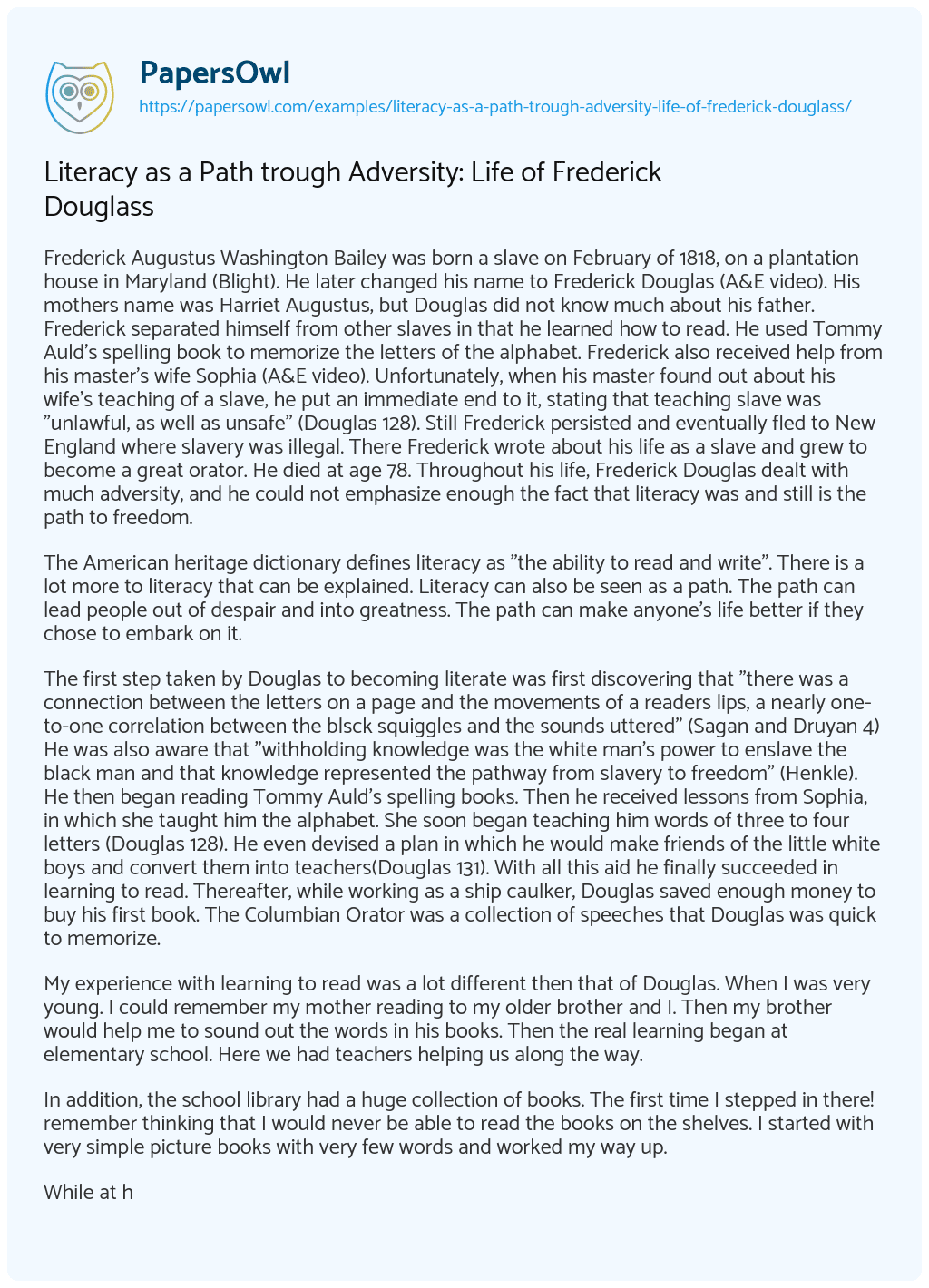 Frederick Augustus Washington Bailey was born a slave on February of 1818, on a plantation house in Maryland (Blight). He later changed his name to Frederick Douglas (A&E video). His mothers name was Harriet Augustus, but Douglas did not know much about his father. Frederick separated himself from other slaves in that he learned how to read. He used Tommy Auld’s spelling book to memorize the letters of the alphabet. Frederick also received help from his master’s wife Sophia (A&E video). Unfortunately, when his master found out about his wife’s teaching of a slave, he put an immediate end to it, stating that teaching slave was “unlawful, as well as unsafe” (Douglas 128). Still Frederick persisted and eventually fled to New England where slavery was illegal. There Frederick wrote about his life as a slave and grew to become a great orator. He died at age 78. Throughout his life, Frederick Douglas dealt with much adversity, and he could not emphasize enough the fact that literacy was and still is the path to freedom.

The American heritage dictionary defines literacy as “the ability to read and write”. There is a lot more to literacy that can be explained. Literacy can also be seen as a path. The path can lead people out of despair and into greatness. The path can make anyone’s life better if they chose to embark on it.

The first step taken by Douglas to becoming literate was first discovering that “there was a connection between the letters on a page and the movements of a readers lips, a nearly one-to-one correlation between the blsck squiggles and the sounds uttered” (Sagan and Druyan 4) He was also aware that “withholding knowledge was the white man’s power to enslave the black man and that knowledge represented the pathway from slavery to freedom” (Henkle). He then began reading Tommy Auld’s spelling books. Then he received lessons from Sophia, in which she taught him the alphabet. She soon began teaching him words of three to four letters (Douglas 128). He even devised a plan in which he would make friends of the little white boys and convert them into teachers(Douglas 131). With all this aid he finally succeeded in learning to read. Thereafter, while working as a ship caulker, Douglas saved enough money to buy his first book. The Columbian Orator was a collection of speeches that Douglas was quick to memorize.

My experience with learning to read was a lot different then that of Douglas. When I was very young. I could remember my mother reading to my older brother and I. Then my brother would help me to sound out the words in his books. Then the real learning began at elementary school. Here we had teachers helping us along the way.

In addition, the school library had a huge collection of books. The first time I stepped in there! remember thinking that I would never be able to read the books on the shelves. I started with very simple picture books with very few words and worked my way up.

While at home there were also educational televisions shows that were on local channels. Take Sesame Street for example. This show revolved around teaching to spell and read and made it seem “fun”. Singing along with “Big Bird” was a great way to pass some time.

There is a direct relationship between literacy and success. Just like Douglas, the ability to read and write made his life successful. In today’s day and age, people tend to make more money at the highest reading levels than those of lower reading levels (Sagan and Druyan 7). The illiterate also face many problems. They are more likely to end up in prison or poverty (Sagan and Druyan 7).

In conclusion, learning to read was a lot like learning to ride a bike. First you see everyone riding his or her bikes. You see that anyone can learn whether short or tall or chunky or maybe skinny. When you fall down for the first time, it seems that you will never learn how to ride and it seems like the best thing to do is give up. But when you see everyone riding off, you know that you need to learn. So you get back up and keep trying until you finally get it. Now you can go places you have never been before. The same goes with learning to read, because while it may be difficult to learn at first, the possibilities on where it can take you are limitless.