Legalization of Gay Marriage in US 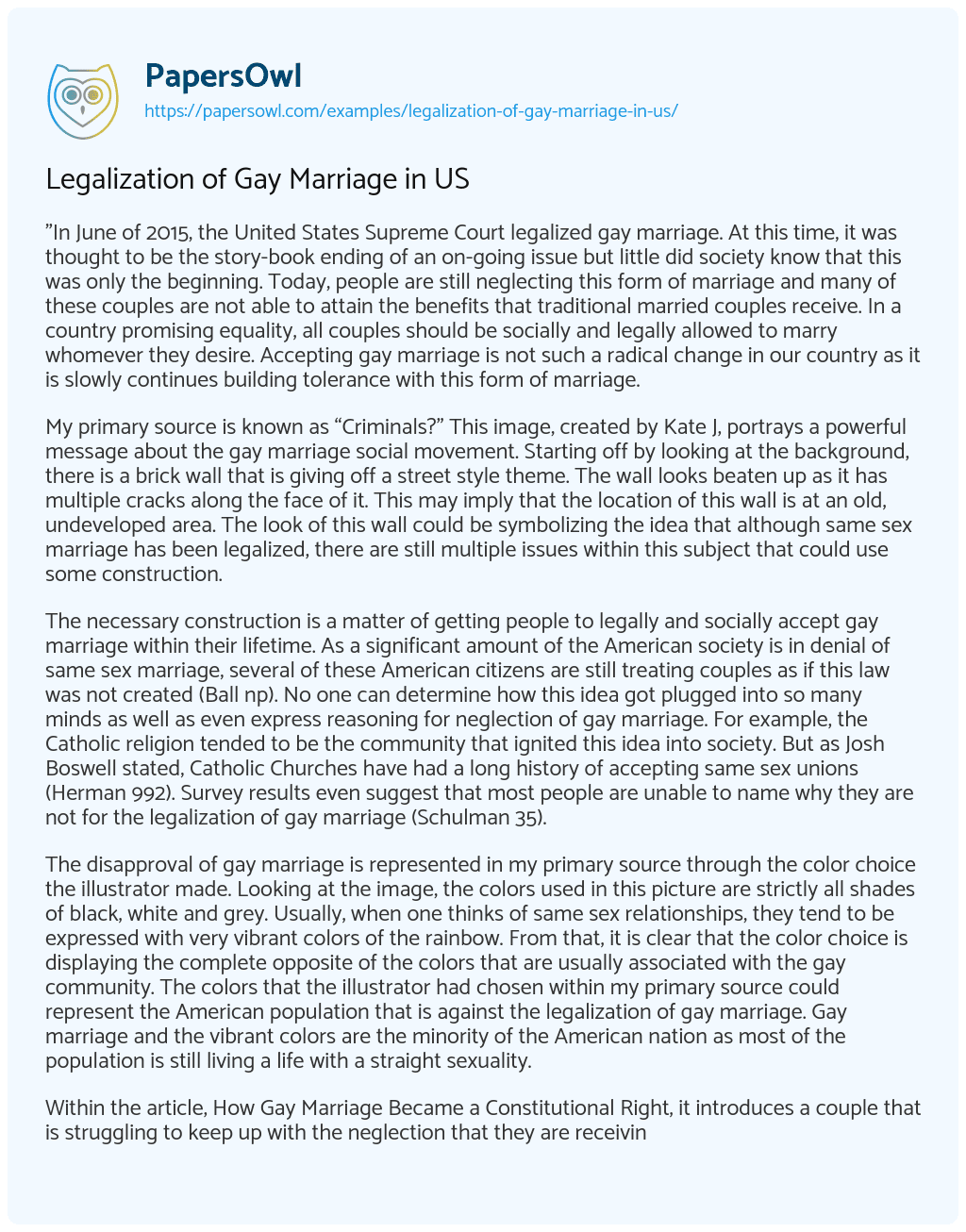 “In June of 2015, the United States Supreme Court legalized gay marriage. At this time, it was thought to be the story-book ending of an on-going issue but little did society know that this was only the beginning. Today, people are still neglecting this form of marriage and many of these couples are not able to attain the benefits that traditional married couples receive. In a country promising equality, all couples should be socially and legally allowed to marry whomever they desire. Accepting gay marriage is not such a radical change in our country as it is slowly continues building tolerance with this form of marriage.

My primary source is known as “Criminals?” This image, created by Kate J, portrays a powerful message about the gay marriage social movement. Starting off by looking at the background, there is a brick wall that is giving off a street style theme. The wall looks beaten up as it has multiple cracks along the face of it. This may imply that the location of this wall is at an old, undeveloped area. The look of this wall could be symbolizing the idea that although same sex marriage has been legalized, there are still multiple issues within this subject that could use some construction.

The necessary construction is a matter of getting people to legally and socially accept gay marriage within their lifetime. As a significant amount of the American society is in denial of same sex marriage, several of these American citizens are still treating couples as if this law was not created (Ball np). No one can determine how this idea got plugged into so many minds as well as even express reasoning for neglection of gay marriage. For example, the Catholic religion tended to be the community that ignited this idea into society. But as Josh Boswell stated, Catholic Churches have had a long history of accepting same sex unions (Herman 992). Survey results even suggest that most people are unable to name why they are not for the legalization of gay marriage (Schulman 35).

The disapproval of gay marriage is represented in my primary source through the color choice the illustrator made. Looking at the image, the colors used in this picture are strictly all shades of black, white and grey. Usually, when one thinks of same sex relationships, they tend to be expressed with very vibrant colors of the rainbow. From that, it is clear that the color choice is displaying the complete opposite of the colors that are usually associated with the gay community. The colors that the illustrator had chosen within my primary source could represent the American population that is against the legalization of gay marriage. Gay marriage and the vibrant colors are the minority of the American nation as most of the population is still living a life with a straight sexuality.

Within the article, How Gay Marriage Became a Constitutional Right, it introduces a couple that is struggling to keep up with the neglection that they are receiving with their attempts at a legal marriage. For the longest time, this couple struggled to find anyone that would agree to marry them by law. Although they were constantly told no, that did not stop them from fighting for their love. “And even if it did, he argued, limiting marriage to opposite-sex couples would constitute unconstitutional discrimination on the basis of sex, violating both the due process and equal protection clauses of the Fourteenth Amendment” (Ball np). This was one of the valid arguments that mentioned how nothing in the Minnesota marriage law included anything about gender, although for some reason these same sex couples were still not allowed to marry each other.

The principles of justice and fairness should carefully be considered when same sex couples are denied a legalized marriage by others. There are many privileges that come with being able to participate in a legal state of marriage that gay couples cannot receive due to their neglection from society. Some of the benefits that these same sex couples are missing out on include tax breaks, inheritance, property ownership and employment benefits. A similar distribution of rights was handed out when the Jim Crow Laws were established. These laws were created by the state and allowed some citizens have privileges that others could not possess because of race. Whether it be one’s race or sexuality, it should not have a role in any legal rights. With the failure to allow same sex couples to attain a legal marriage license, this creates forms of inequalities since some of the Americans can attain benefits that others cannot (Schulman 36).

On the right side of the primary source, the word “criminals” lies above two stick figures. Besides the word above that quickly labels the two stick figures, there are more distinctions that the illustrator tried to make clear in the image. The two stick figures are seen to be representing themselves as males and if not that, they appear to look the same. Whether they are two males or two females, the main thing is that these figures love someone of the same sex. And to top it off, they are holding hands which shows that they are compassionate and fond of one another. When you hear the word “criminal”, it is often associated with people such as robbers, shooters and murderers. It is an unusual comparison of criminals to gay couples since the majority of gay couples do not oppose this kind of threat upon society like criminals do. But gay couples carry on this image of being criminals.

Hawaii is a great example to prove the harmless effects from this legalization and acceptance of gay marriage. When the legalization of gay marriage was brought to life in Hawaii, there was not a dramatic change in society as people had imagined. A great majority of the Hawaiians were against this decision but were willing to compromise with the people who were for it. In that past, Hawaii has been the first of 50 states to take on controversial issues that have impacted the nation. In the past, Hawaii had legalized abortion, approved the equal rights amendment and was the first group to prohibit sexual orientation discrimination and yet, this state is completely fine how it is (Herman 988). With a few rational adjustments to one’s lifestyle, Hawaii is still a safe, controlled community with the acceptance of gay marriage.

Legalizing gay marriage would offer so much more to the homosexual community. They would receive the same treatment that all people in America receive which would bring American closer to complete equality. As time moves on further from the legalization date, people are trying to build a stronger tolerance for this new form of marriage (Schulman 35). Building awareness for the allowance of this form of marriage as well as the rights we all have as Americans is important to keep pressing onto the public. There is no significant harm or change to the lifestyles of the people who are not participating in this change so there should not be an issue with not allowing it. But people fear this risk that this taste of change within our laws and society would be too much for our nation to handle (Herman 1018).”

Legalization of Gay Marriage in US. (2021, May 29). Retrieved from https://papersowl.com/examples/legalization-of-gay-marriage-in-us/

Should Same-sex Marriage be Legalized?