Latinos and African-Americans have Faced Constant Discrimination in Society 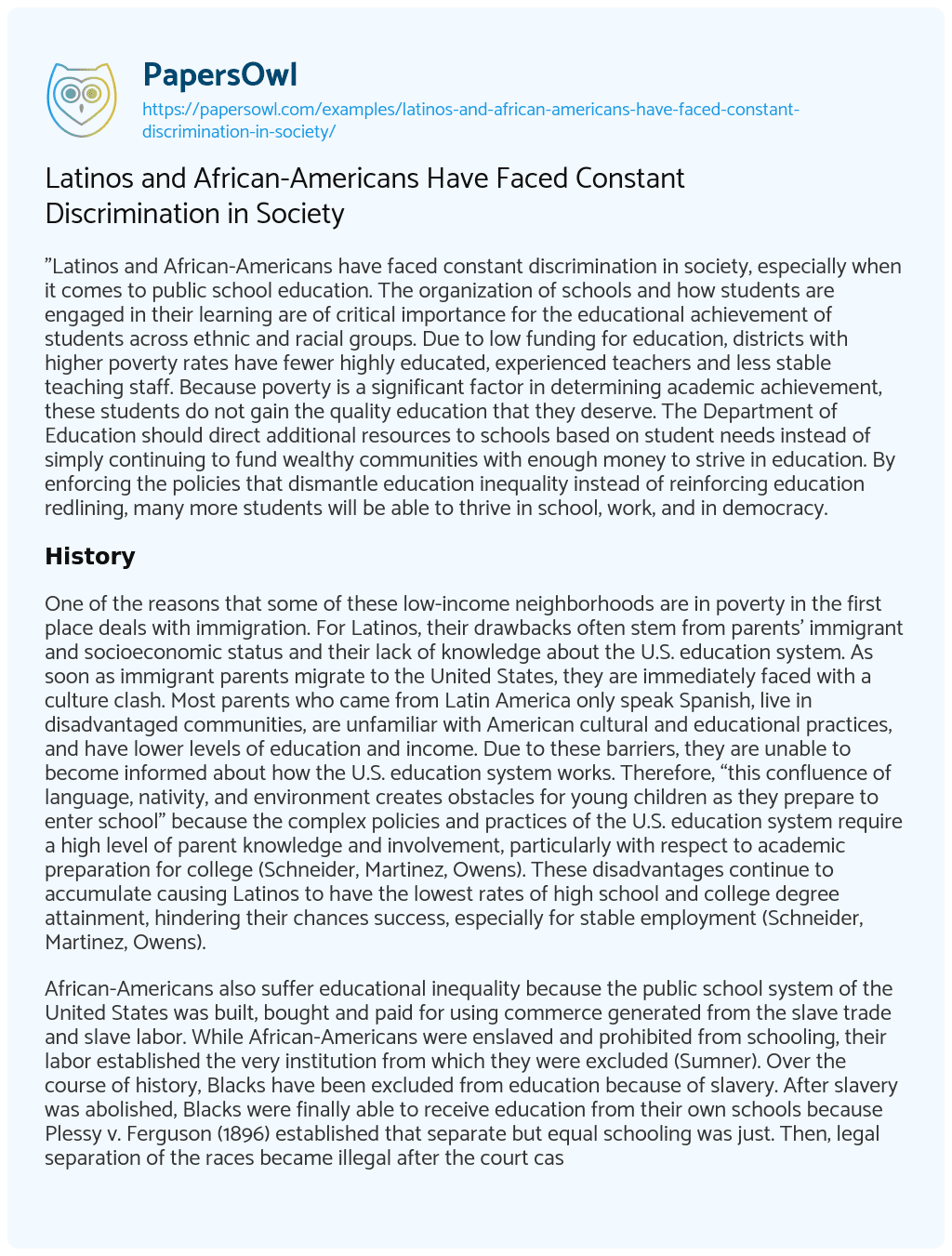 “Latinos and African-Americans have faced constant discrimination in society, especially when it comes to public school education. The organization of schools and how students are engaged in their learning are of critical importance for the educational achievement of students across ethnic and racial groups. Due to low funding for education, districts with higher poverty rates have fewer highly educated, experienced teachers and less stable teaching staff. Because poverty is a significant factor in determining academic achievement, these students do not gain the quality education that they deserve. The Department of Education should direct additional resources to schools based on student needs instead of simply continuing to fund wealthy communities with enough money to strive in education. By enforcing the policies that dismantle education inequality instead of reinforcing education redlining, many more students will be able to thrive in school, work, and in democracy.

One of the reasons that some of these low-income neighborhoods are in poverty in the first place deals with immigration. For Latinos, their drawbacks often stem from parents’ immigrant and socioeconomic status and their lack of knowledge about the U.S. education system. As soon as immigrant parents migrate to the United States, they are immediately faced with a culture clash. Most parents who came from Latin America only speak Spanish, live in disadvantaged communities, are unfamiliar with American cultural and educational practices, and have lower levels of education and income. Due to these barriers, they are unable to become informed about how the U.S. education system works. Therefore, “this confluence of language, nativity, and environment creates obstacles for young children as they prepare to enter school” because the complex policies and practices of the U.S. education system require a high level of parent knowledge and involvement, particularly with respect to academic preparation for college (Schneider, Martinez, Owens). These disadvantages continue to accumulate causing Latinos to have the lowest rates of high school and college degree attainment, hindering their chances success, especially for stable employment (Schneider, Martinez, Owens).

African-Americans also suffer educational inequality because the public school system of the United States was built, bought and paid for using commerce generated from the slave trade and slave labor. While African-Americans were enslaved and prohibited from schooling, their labor established the very institution from which they were excluded (Sumner). Over the course of history, Blacks have been excluded from education because of slavery. After slavery was abolished, Blacks were finally able to receive education from their own schools because Plessy v. Ferguson (1896) established that separate but equal schooling was just. Then, legal separation of the races became illegal after the court case of Brown v. the Board of Education of Topeka, Kansas in 1954. However, there has not been enough attention payed to the court cases that followed, undoing the educational promised land for every child that was intended by Brown v. Board because, “Some argue that today our schools are now more segregated than they ever were before we tried to desegregate them in the first place” (Sumner). With that in mind, it is unfair for minorities to receive less than valuable education because the quality of education is directly proportional to the access to college, the access to jobs, and the access to the future.”

Latinos and African-Americans Have Faced Constant Discrimination in Society. (2021, Apr 08). Retrieved from https://papersowl.com/examples/latinos-and-african-americans-have-faced-constant-discrimination-in-society/

Discrimination against African-Americans by the Police

The American Legacy: a Cycle of Oppression against African Americans

Problem of Discrimination against African-Americans