King Lear is Speaking to Kent about the Storm 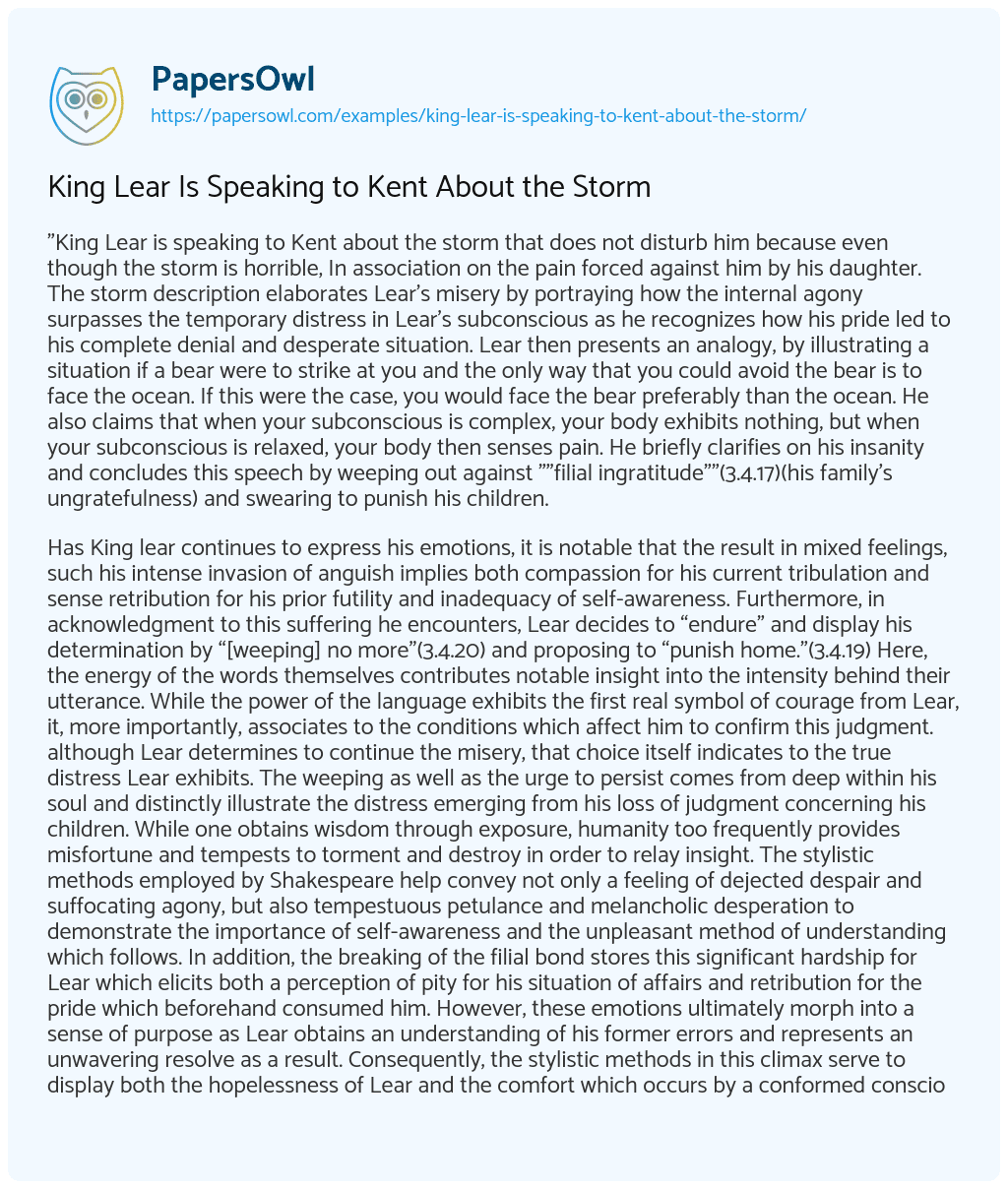 “King Lear is speaking to Kent about the storm that does not disturb him because even though the storm is horrible, In association on the pain forced against him by his daughter. The storm description elaborates Lear’s misery by portraying how the internal agony surpasses the temporary distress in Lear’s subconscious as he recognizes how his pride led to his complete denial and desperate situation. Lear then presents an analogy, by illustrating a situation if a bear were to strike at you and the only way that you could avoid the bear is to face the ocean. If this were the case, you would face the bear preferably than the ocean. He also claims that when your subconscious is complex, your body exhibits nothing, but when your subconscious is relaxed, your body then senses pain. He briefly clarifies on his insanity and concludes this speech by weeping out against “”filial ingratitude””(3.4.17)(his family’s ungratefulness) and swearing to punish his children.

Has King lear continues to express his emotions, it is notable that the result in mixed feelings, such his intense invasion of anguish implies both compassion for his current tribulation and sense retribution for his prior futility and inadequacy of self-awareness. Furthermore, in acknowledgment to this suffering he encounters, Lear decides to “endure” and display his determination by “[weeping] no more”(3.4.20) and proposing to “punish home.”(3.4.19) Here, the energy of the words themselves contributes notable insight into the intensity behind their utterance. While the power of the language exhibits the first real symbol of courage from Lear, it, more importantly, associates to the conditions which affect him to confirm this judgment. although Lear determines to continue the misery, that choice itself indicates to the true distress Lear exhibits. The weeping as well as the urge to persist comes from deep within his soul and distinctly illustrate the distress emerging from his loss of judgment concerning his children. While one obtains wisdom through exposure, humanity too frequently provides misfortune and tempests to torment and destroy in order to relay insight. The stylistic methods employed by Shakespeare help convey not only a feeling of dejected despair and suffocating agony, but also tempestuous petulance and melancholic desperation to demonstrate the importance of self-awareness and the unpleasant method of understanding which follows. In addition, the breaking of the filial bond stores this significant hardship for Lear which elicits both a perception of pity for his situation of affairs and retribution for the pride which beforehand consumed him. However, these emotions ultimately morph into a sense of purpose as Lear obtains an understanding of his former errors and represents an unwavering resolve as a result. Consequently, the stylistic methods in this climax serve to display both the hopelessness of Lear and the comfort which occurs by a conformed conscious as the audience witnesses Lear’s comprehensive transformation.

As King Lear for the first time in his royal life, Lear encounters what it’s like to be a poor, exposed unfortunate, and the feeling is unpleasant. Lear’s description shows the guilt of not taking care of the people when he could’ve. This scene also displays the destruction done to the civilians affected by Lear because he delivered his kingdom to “unworthy heirs”. The king recognizes that his previous comforts limited his administering compassionately to the victims of his realm he has taken “”Too little care of this.””(3.4.38) Only a portion of human misery can confirm the distinction among what is required in life and what is an insignificant luxury. Thus enlightened, the wealthy and arrogant “”mayst shake the superflux to them””(3.4.40) shake off what is extreme and distribute it to the needy. These words are remorseful, empathetic, and sympathetic for the poor, a community that Lear has not regarded before. Lear acknowledges the similarities between their lives and his current situation. In a real sense, his compassion for the underprivileged is also a representation of the understanding he observes for his own situation. He finally feels empathy for the poor, only because he has become one of them. One of the continuing motif represented since the opening of the play is the incapacity to see things for what they are. The tragedy of King Lear is induced by his incapacity to distinguish reality, first He assumes Goneril’s and Regan’s lies about their admiration for him, next, He unjustly attacks Cordelia of acting disloyal, when in fact, she is the only one of the three who loves him, third, He exiles Kent for dishonesty when he is the most faithful of Lear’s assistants, fourth, Lear wrongly assumes that he can abandon responsibility without negative consequences. in this part of the play, Lear acknowledges the situation of the unfortunate in his kingdom and regrets not having done more to support them. Ultimately, Lear admits his former absurdity, but it’s too late. He also cries to those currently in authority, urging them to put themselves into the positions the starving are in so that they may definitely understand the necessities of the homeless. However, we see Lear caring for the needs of others. His madness is seeming to bring him a new found clarity and empathy. His horrible situation has also put him in the position to deeply understand the pains of the poor.”

King Lear Is Speaking to Kent About the Storm. (2021, Apr 19). Retrieved from https://papersowl.com/examples/king-lear-is-speaking-to-kent-about-the-storm/

King Lear Vs. Job: what about Fate?