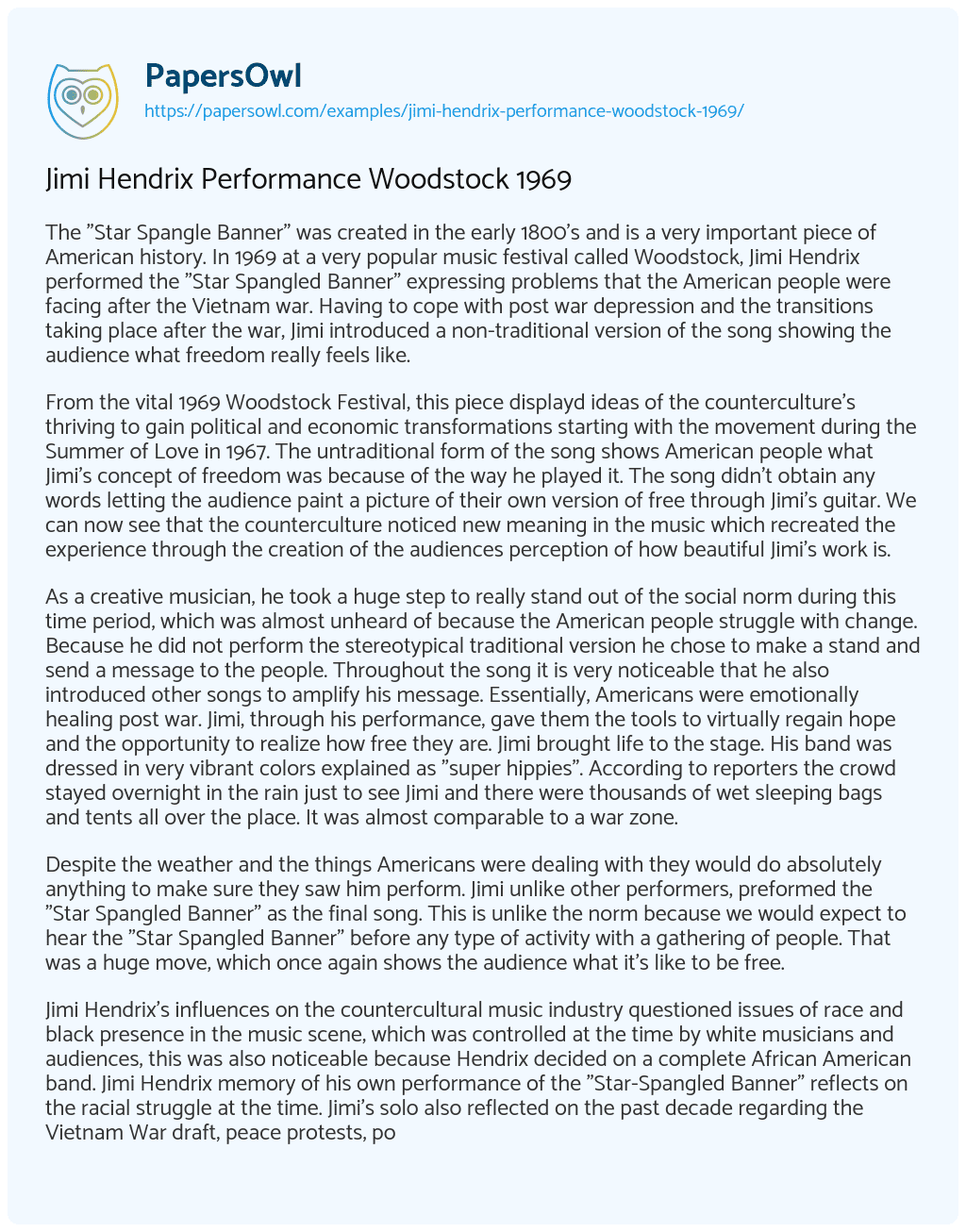 The “Star Spangle Banner” was created in the early 1800’s and is a very important piece of American history. In 1969 at a very popular music festival called Woodstock, Jimi Hendrix performed the “Star Spangled Banner” expressing problems that the American people were facing after the Vietnam war. Having to cope with post war depression and the transitions taking place after the war, Jimi introduced a non-traditional version of the song showing the audience what freedom really feels like.

From the vital 1969 Woodstock Festival, this piece displayd ideas of the counterculture’s thriving to gain political and economic transformations starting with the movement during the Summer of Love in 1967. The untraditional form of the song shows American people what Jimi’s concept of freedom was because of the way he played it. The song didn’t obtain any words letting the audience paint a picture of their own version of free through Jimi’s guitar. We can now see that the counterculture noticed new meaning in the music which recreated the experience through the creation of the audiences perception of how beautiful Jimi’s work is.

As a creative musician, he took a huge step to really stand out of the social norm during this time period, which was almost unheard of because the American people struggle with change. Because he did not perform the stereotypical traditional version he chose to make a stand and send a message to the people. Throughout the song it is very noticeable that he also introduced other songs to amplify his message. Essentially, Americans were emotionally healing post war. Jimi, through his performance, gave them the tools to virtually regain hope and the opportunity to realize how free they are. Jimi brought life to the stage. His band was dressed in very vibrant colors explained as “super hippies”. According to reporters the crowd stayed overnight in the rain just to see Jimi and there were thousands of wet sleeping bags and tents all over the place. It was almost comparable to a war zone.

Despite the weather and the things Americans were dealing with they would do absolutely anything to make sure they saw him perform. Jimi unlike other performers, preformed the “Star Spangled Banner” as the final song. This is unlike the norm because we would expect to hear the “Star Spangled Banner” before any type of activity with a gathering of people. That was a huge move, which once again shows the audience what it’s like to be free.

Jimi Hendrix’s influences on the countercultural music industry questioned issues of race and black presence in the music scene, which was controlled at the time by white musicians and audiences, this was also noticeable because Hendrix decided on a complete African American band. Jimi Hendrix memory of his own performance of the “Star-Spangled Banner” reflects on the racial struggle at the time. Jimi’s solo also reflected on the past decade regarding the Vietnam War draft, peace protests, political problems, and cultural changes.

A noticeable pattern in Jimi’s Hendrix performance is that he would begin with the “Star Spangled Banner” and fade off, in and out of Voodoo Child, going back into the “Star Spangled Banner” then introducing a well-known song called Taps, once again he would circle back to the “Star Spangled Banner” and finishing with a very famous song called Purple Haze. This pattern explains Jimi, as an individual and an artist because he was extremely creative and spontaneous with his work. He creates the hallucinogenic “trip” by using the medium of sound. The drug and drug culture during this time period served to help musicians express their emotions to the audience through the sensorial experience. We see the utilizations of music as a great tool for the promotion of desires, ideas and the extreme feelings of different states of mind with the end goal of expanding the mind.

In conclusion, all of our perceptions on Jimi Hendrix as a person and his performances are going to be different but he was an amazing individual and a great leader. By bringing African American culture into a prominently White industry he made history. Also, by introducing a non-tradition version of a song and make it his own piece of work takes a lot of confidence and talent. Despite the adversity he had to face he really brought something new to the table for the American people to see things the way they want to see them.

“3 Days of Peace and Music” and Woodstock