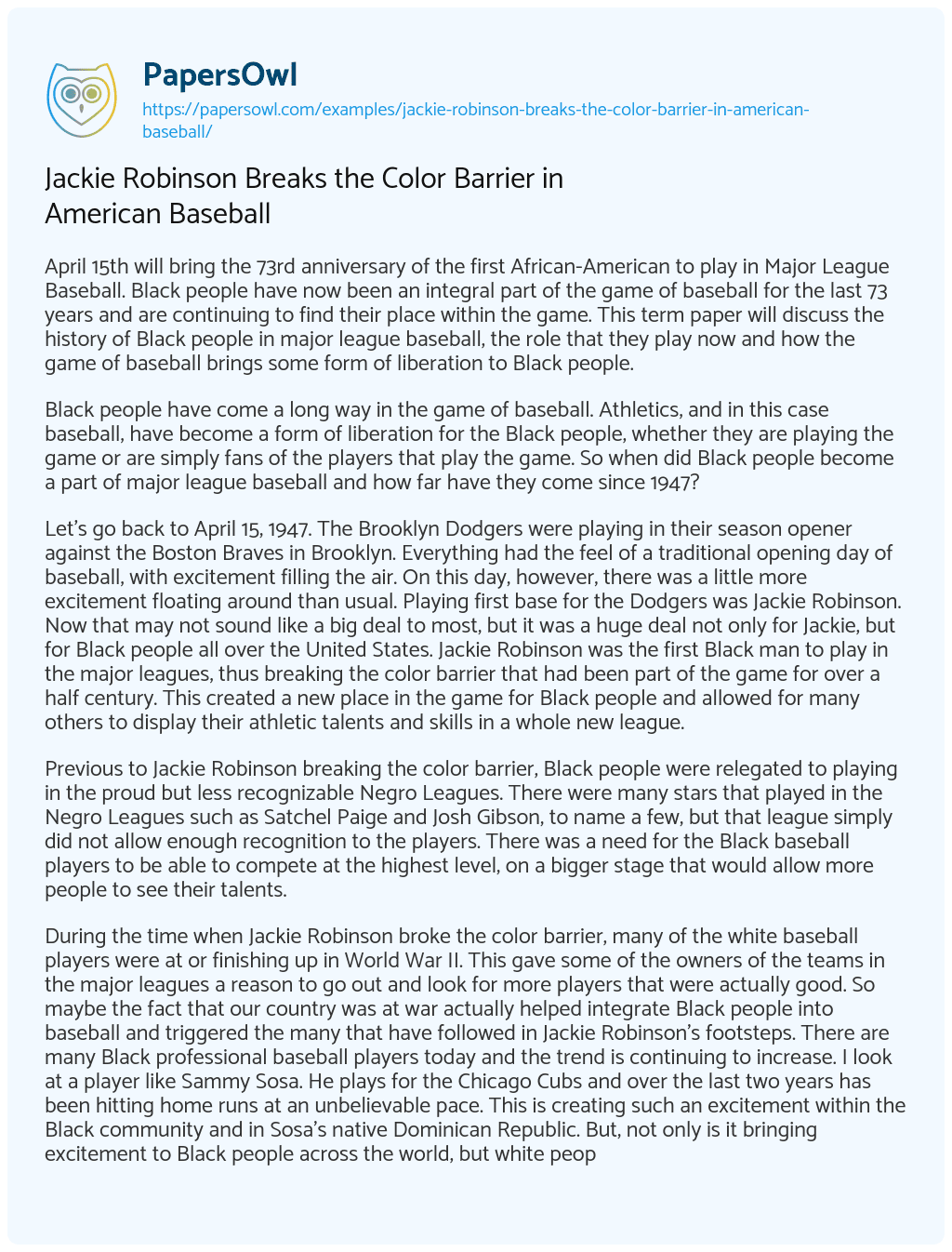 April 15th will bring the 73rd anniversary of the first African-American to play in Major League Baseball. Black people have now been an integral part of the game of baseball for the last 73 years and are continuing to find their place within the game. This term paper will discuss the history of Black people in major league baseball, the role that they play now and how the game of baseball brings some form of liberation to Black people.

Black people have come a long way in the game of baseball. Athletics, and in this case baseball, have become a form of liberation for the Black people, whether they are playing the game or are simply fans of the players that play the game. So when did Black people become a part of major league baseball and how far have they come since 1947?

Let’s go back to April 15, 1947. The Brooklyn Dodgers were playing in their season opener against the Boston Braves in Brooklyn. Everything had the feel of a traditional opening day of baseball, with excitement filling the air. On this day, however, there was a little more excitement floating around than usual. Playing first base for the Dodgers was Jackie Robinson. Now that may not sound like a big deal to most, but it was a huge deal not only for Jackie, but for Black people all over the United States. Jackie Robinson was the first Black man to play in the major leagues, thus breaking the color barrier that had been part of the game for over a half century. This created a new place in the game for Black people and allowed for many others to display their athletic talents and skills in a whole new league.

Previous to Jackie Robinson breaking the color barrier, Black people were relegated to playing in the proud but less recognizable Negro Leagues. There were many stars that played in the Negro Leagues such as Satchel Paige and Josh Gibson, to name a few, but that league simply did not allow enough recognition to the players. There was a need for the Black baseball players to be able to compete at the highest level, on a bigger stage that would allow more people to see their talents.

During the time when Jackie Robinson broke the color barrier, many of the white baseball players were at or finishing up in World War II. This gave some of the owners of the teams in the major leagues a reason to go out and look for more players that were actually good. So maybe the fact that our country was at war actually helped integrate Black people into baseball and triggered the many that have followed in Jackie Robinson’s footsteps. There are many Black professional baseball players today and the trend is continuing to increase. I look at a player like Sammy Sosa. He plays for the Chicago Cubs and over the last two years has been hitting home runs at an unbelievable pace. This is creating such an excitement within the Black community and in Sosa’s native Dominican Republic. But, not only is it bringing excitement to Black people across the world, but white people have also recognized him for his achievements and begun to watch the highlight shows every night just to see how Sammy is doing or if he is hitting more home runs. This is one area that proves to me that baseball has come a long way in that Black people are now looked upon as great ballplayers, and not the Black ballplayer.

Many of the great players currently in the major leagues are Black. Some of the superstars such as Ken Griffey Jr., Sosa, and Pedro Martinez are Black and this is giving an incredible boost to the Black population. While I realize that playing in the major leagues is a difficult goal to attain for anyone, this is bringing a form of liberation to Black people all over the world. I realize that major league baseball does not employ a majority of Black people in the United States, but the liberation for the Black people does not necessarily have to come directly from the league. The player salaries for major leaguers have become rather outrageous, and with salary contributions to charities and other things, this is bringing more money into Black communities. Yes, there is a small amount of the Black population playing in the major leagues, but there is also a small amount of whites playing too. The fact is, only a small fraction of the population of the United States is playing in the major leagues. That is not where I feel that the liberation comes from. I feel that the liberation for the Black people comes through watching some of their fellow members succeed in such high profile positions. It brings joy to members of the Black community to see them succeeding now, only fifty-three years after being allowed to participate in the game that they have enjoyed for just as long as the whites, but not allowed to compete on the same level because of racial differences.

the first half of the 20th century; dominated by whites. The number of Black managers is still relatively low, but hopefully progress will continue to be made. There are a few Black managers currently managing such as Dusty Baker and Don Baylor, both whom are former major league players. The reason that there are probably not more Black managers is that they have not been around major league baseball as long as whites. If you consider that a lot of managers in the majors are former players, then this makes a little bit of sense because white people have been playing the in the major leagues much longer. There are many people pushing not only for more Black managers, but more minority managers in general. There are probably many reasons for these feelings but I can see what would be considered the major one. With more Black and other minority players, people in those communities are pushing for more minority coaches to be there to support the players instead of predominately white coaches.

The last area that I will cover is the future of Black people in major league baseball. The future of major league baseball, in itself, lies within the development of youths to become interested in the game and develop their skills to become as good as they can possibly be. This interest is being developed by more inner city Black people now than ever before in the history of baseball. Excitement within the Black community is increasing by watching players such as Griffey, Sosa and Martinez, and that is allowing more kids to want to play the game. The development of skills will begin when the kids are young, but will be enhanced when they either reach college or in the minor leagues. More opportunities are opening up throughout the nation in colleges for Black people to play baseball because now people know that they can play at a very high level. All of these factors together will keep increasing the excitement for Black people all over and keep the future within baseball looking very bright.

Over the last fifty-three years, Black people have become an integral part of major league baseball and are continuing to grow within the sport. The excitement that is within the Black community at this point and time is great and I believe that it will continue to grow. Not all Black people will have a chance to play in the major leagues, but most of them will have a favorite player, or a role model, that they look up to and wish to emulate. From Jackie Robinson to Ken Griffey Jr., there have been many great moments created by Black people throughout the last half century in the major leagues. Many Black people have major league records that are still in place today, the most notable being Henry Aaron and his 755 career home runs. The numbers for Black people are astounding over the years and with the excitement around the game now, there is no reason to believe that it will change in the future. As far as major league baseball is concerned, Jackie Robinson paved the way for many Black people in baseball, and there have been many to follow his lead.