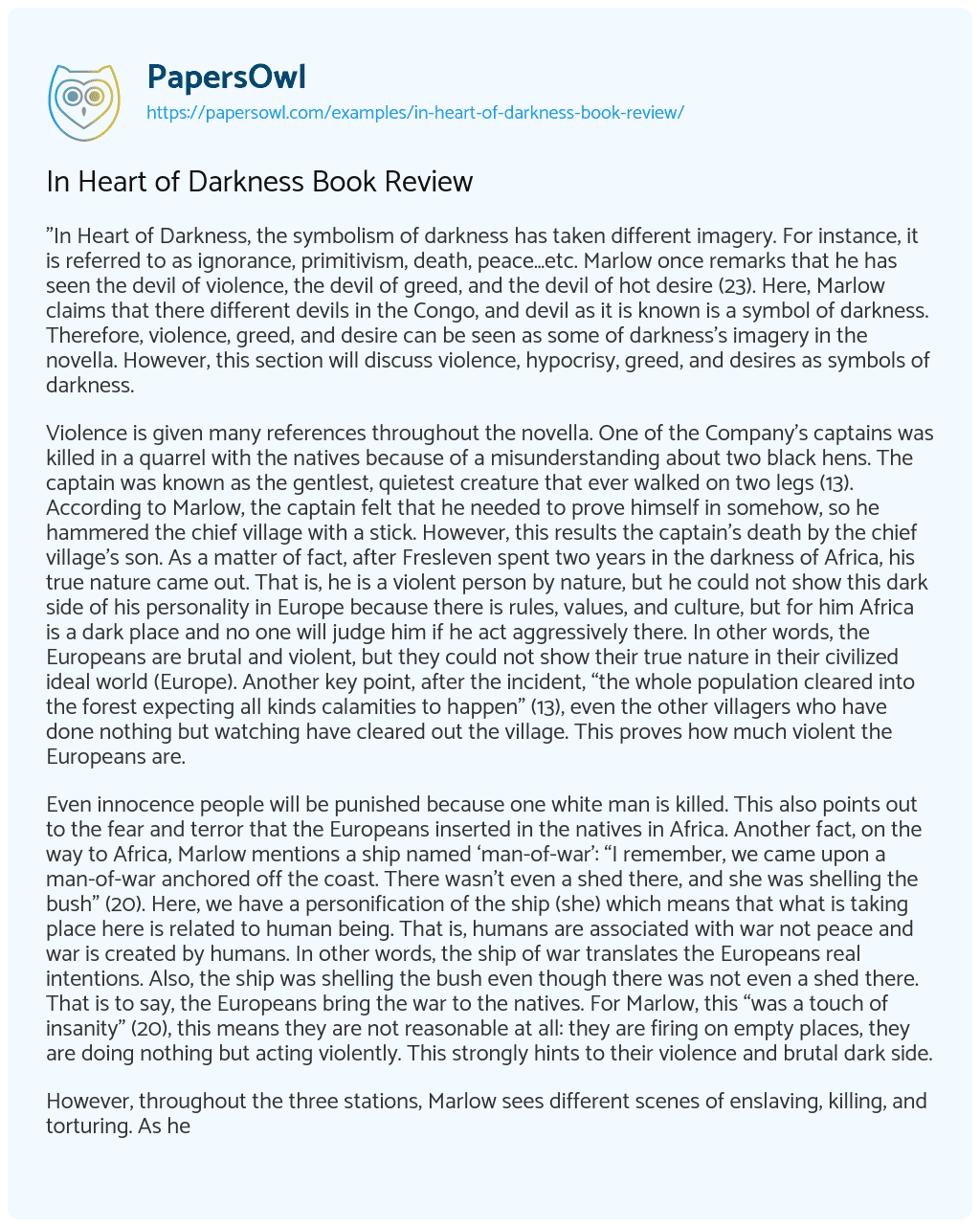 Violence is given many references throughout the novella. One of the Company’s captains was killed in a quarrel with the natives because of a misunderstanding about two black hens. The captain was known as the gentlest, quietest creature that ever walked on two legs (13). According to Marlow, the captain felt that he needed to prove himself in somehow, so he hammered the chief village with a stick. However, this results the captain’s death by the chief village’s son. As a matter of fact, after Fresleven spent two years in the darkness of Africa, his true nature came out. That is, he is a violent person by nature, but he could not show this dark side of his personality in Europe because there is rules, values, and culture, but for him Africa is a dark place and no one will judge him if he act aggressively there. In other words, the Europeans are brutal and violent, but they could not show their true nature in their civilized ideal world (Europe). Another key point, after the incident, “the whole population cleared into the forest expecting all kinds calamities to happen” (13), even the other villagers who have done nothing but watching have cleared out the village. This proves how much violent the Europeans are.

Even innocence people will be punished because one white man is killed. This also points out to the fear and terror that the Europeans inserted in the natives in Africa. Another fact, on the way to Africa, Marlow mentions a ship named ‘man-of-war’: “I remember, we came upon a man-of-war anchored off the coast. There wasn’t even a shed there, and she was shelling the bush” (20). Here, we have a personification of the ship (she) which means that what is taking place here is related to human being. That is, humans are associated with war not peace and war is created by humans. In other words, the ship of war translates the Europeans real intentions. Also, the ship was shelling the bush even though there was not even a shed there. That is to say, the Europeans bring the war to the natives. For Marlow, this “was a touch of insanity” (20), this means they are not reasonable at all: they are firing on empty places, they are doing nothing but acting violently. This strongly hints to their violence and brutal dark side.

However, throughout the three stations, Marlow sees different scenes of enslaving, killing, and torturing. As he arrives to the first station (outer station), he sees groups of the natives some of them lying beneath trees to die and some are forced to work for the Europeans while the Europeans do not care about the natives. In the second station (center station), Marlow sees a nigger being beaten because they claimed that he causes the fire in the station some way (34). They beat the man even though they are not sure that he caused the fire. That is, they just need someone to blame and punish. In the third station (inner station), Marlow finds some heads of the on stakes, these natives were killed and their heads were hanged there by orders of Kurtz, a representative of the civilizing mission. Also, the pilgrims who are supposed to be men of peace encourage violence and killing: “I saw the pilgrims on deck getting out their rifles with an air of anticipating a jolly lark” (97). In brief, the Europeans use violence on the natives in Africa: they enslave, kill, and torture in the name of civilization. They use the civilizing mission as an excuse to unleash the devil of violence over the natives. That is, they are dark and brutal by nature, they just need an excuse.”

In Heart of Darkness Book Review. (2021, Jun 05). Retrieved from https://papersowl.com/examples/in-heart-of-darkness-book-review/

Marlows Story into the Heart of Darkness