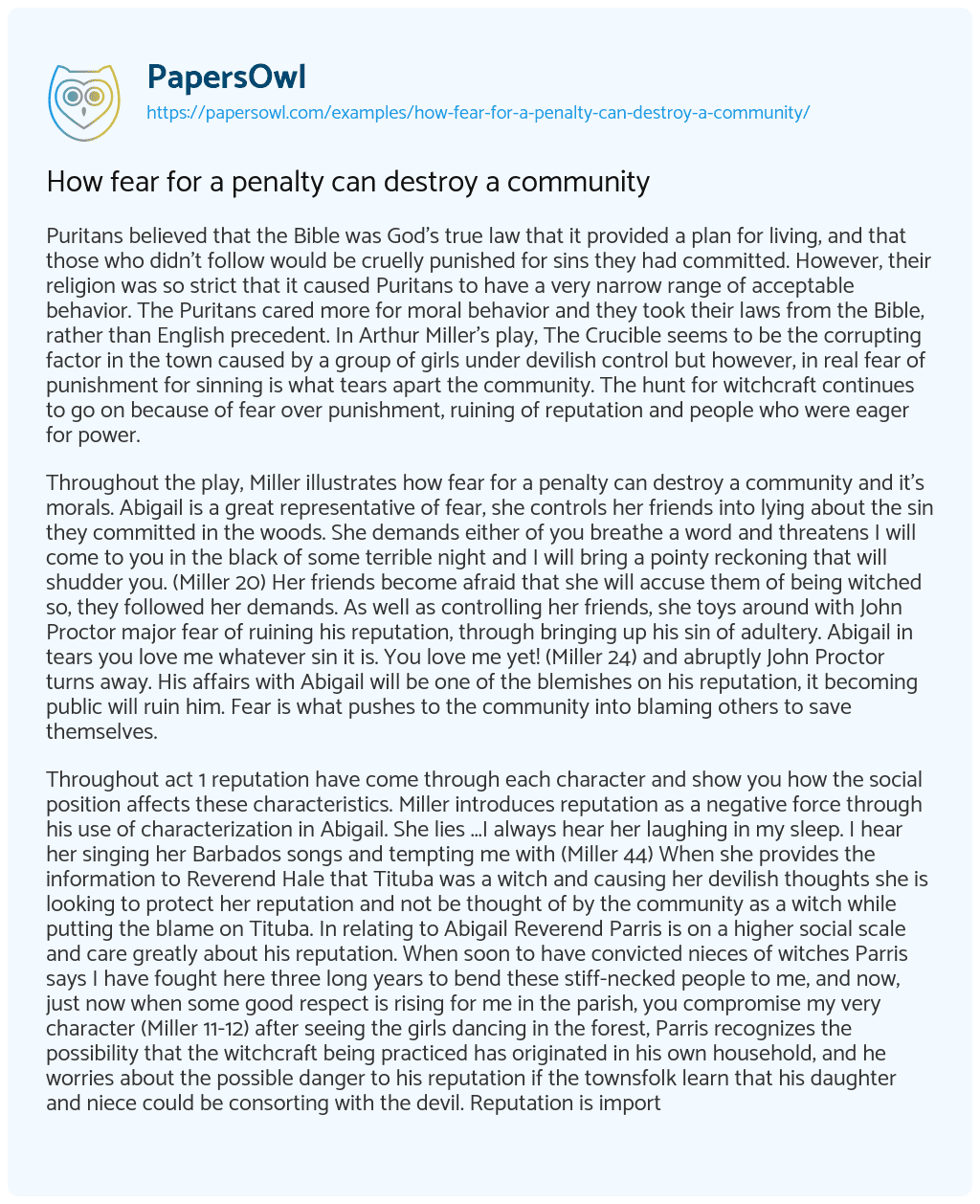 Puritans believed that the Bible was God’s true law that it provided a plan for living, and that those who didn’t follow would be cruelly punished for sins they had committed. However, their religion was so strict that it caused Puritans to have a very narrow range of acceptable behavior. The Puritans cared more for moral behavior and they took their laws from the Bible, rather than English precedent. In Arthur Miller’s play, The Crucible seems to be the corrupting factor in the town caused by a group of girls under devilish control but however, in real fear of punishment for sinning is what tears apart the community. The hunt for witchcraft continues to go on because of fear over punishment, ruining of reputation and people who were eager for power.

Throughout the play, Miller illustrates how fear for a penalty can destroy a community and it’s morals. Abigail is a great representative of fear, she controls her friends into lying about the sin they committed in the woods. She demands either of you breathe a word and threatens I will come to you in the black of some terrible night and I will bring a pointy reckoning that will shudder you. (Miller 20) Her friends become afraid that she will accuse them of being witched so, they followed her demands. As well as controlling her friends, she toys around with John Proctor major fear of ruining his reputation, through bringing up his sin of adultery. Abigail in tears you love me whatever sin it is. You love me yet! (Miller 24) and abruptly John Proctor turns away. His affairs with Abigail will be one of the blemishes on his reputation, it becoming public will ruin him. Fear is what pushes to the community into blaming others to save themselves.

Throughout act 1 reputation have come through each character and show you how the social position affects these characteristics. Miller introduces reputation as a negative force through his use of characterization in Abigail. She lies …I always hear her laughing in my sleep. I hear her singing her Barbados songs and tempting me with (Miller 44) When she provides the information to Reverend Hale that Tituba was a witch and causing her devilish thoughts she is looking to protect her reputation and not be thought of by the community as a witch while putting the blame on Tituba. In relating to Abigail Reverend Parris is on a higher social scale and care greatly about his reputation. When soon to have convicted nieces of witches Parris says I have fought here three long years to bend these stiff-necked people to me, and now, just now when some good respect is rising for me in the parish, you compromise my very character (Miller 11-12) after seeing the girls dancing in the forest, Parris recognizes the possibility that the witchcraft being practiced has originated in his own household, and he worries about the possible danger to his reputation if the townsfolk learn that his daughter and niece could be consorting with the devil. Reputation is important in theocratic Salem, where public and private moralities are one and the same.

The desire to gain power travels in The Crucible as the witch trials lead to dramatic changes in which characters hold the greatest control over the course of events. The amount of power the church has is what the people of the society depend on and Danforth was a judge who declared that this is a court of law. Danforth knows that because of his power he can suspect people without evidence you misunderstand sir; I cannot pardon These twelve are already hanged for the same crime. it is not just. ( Miller 68) Danforth arrogantly waves off the request of postponement and he thinks that the hangings will raise the issue of his credibility as a judge.

After a short discussion where the truth of the accusers’ claims. Danforth cited …you must understand a person is either with this court or he must be counted against it (Miller 94) Danforth lives for this court because it follows bylaws of the bible and in his power, he has the authority to not be questioned. In this case, in both of these texts the people of these societies feared to those in power, its either you agree with them or face some sort of punishment.

Focused on maintaining public reputation, the townsfolk of Salem must fear that the sins of their friends and associates will taint their names.

How fear for a penalty can destroy a community. (2019, Jul 17). Retrieved from https://papersowl.com/examples/how-fear-for-a-penalty-can-destroy-a-community/

The Sins of Fear