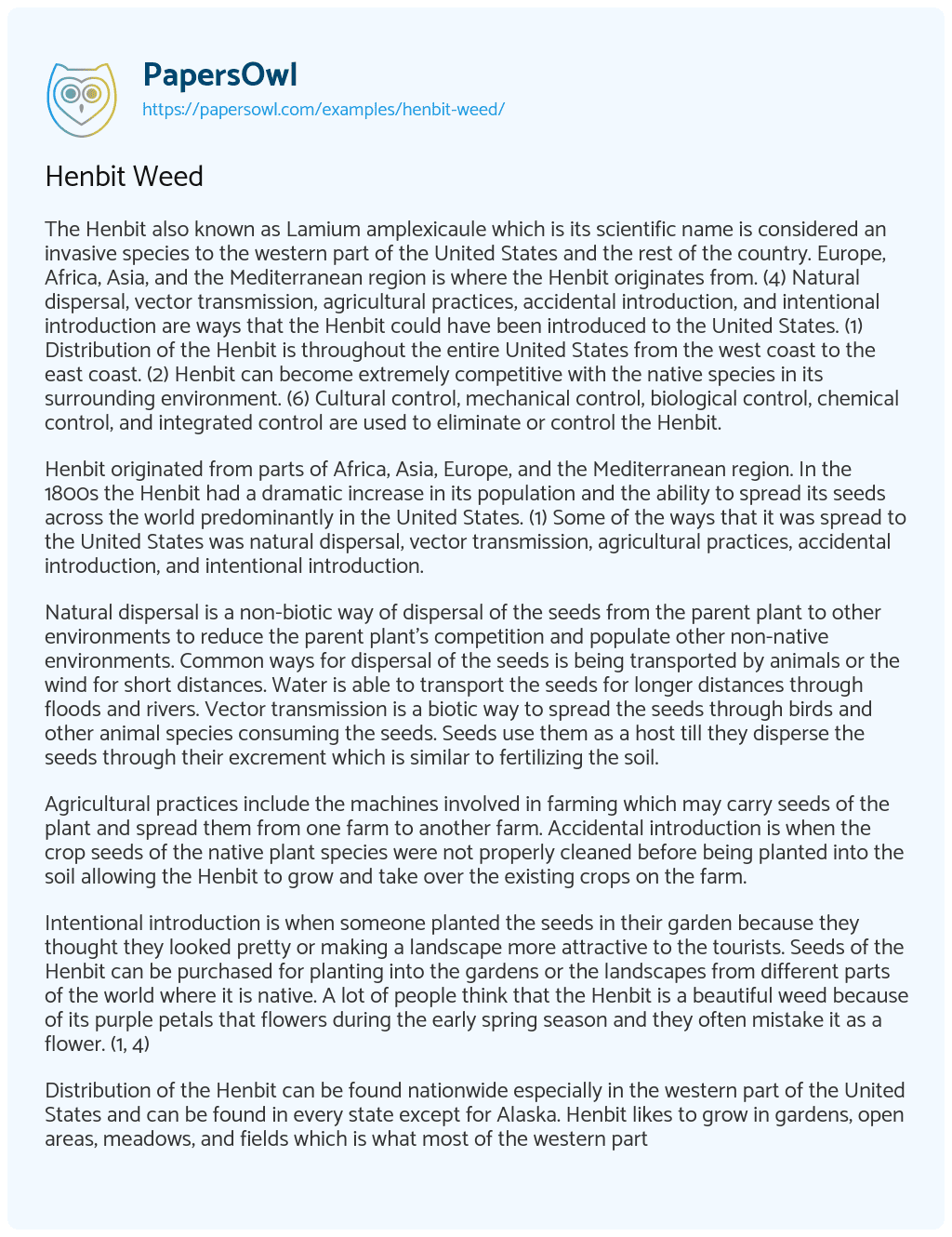 The Henbit also known as Lamium amplexicaule which is its scientific name is considered an invasive species to the western part of the United States and the rest of the country. Europe, Africa, Asia, and the Mediterranean region is where the Henbit originates from. (4) Natural dispersal, vector transmission, agricultural practices, accidental introduction, and intentional introduction are ways that the Henbit could have been introduced to the United States. (1) Distribution of the Henbit is throughout the entire United States from the west coast to the east coast. (2) Henbit can become extremely competitive with the native species in its surrounding environment. (6) Cultural control, mechanical control, biological control, chemical control, and integrated control are used to eliminate or control the Henbit.

Henbit originated from parts of Africa, Asia, Europe, and the Mediterranean region. In the 1800s the Henbit had a dramatic increase in its population and the ability to spread its seeds across the world predominantly in the United States. (1) Some of the ways that it was spread to the United States was natural dispersal, vector transmission, agricultural practices, accidental introduction, and intentional introduction.

Natural dispersal is a non-biotic way of dispersal of the seeds from the parent plant to other environments to reduce the parent plant’s competition and populate other non-native environments. Common ways for dispersal of the seeds is being transported by animals or the wind for short distances. Water is able to transport the seeds for longer distances through floods and rivers. Vector transmission is a biotic way to spread the seeds through birds and other animal species consuming the seeds. Seeds use them as a host till they disperse the seeds through their excrement which is similar to fertilizing the soil.

Agricultural practices include the machines involved in farming which may carry seeds of the plant and spread them from one farm to another farm. Accidental introduction is when the crop seeds of the native plant species were not properly cleaned before being planted into the soil allowing the Henbit to grow and take over the existing crops on the farm.

Intentional introduction is when someone planted the seeds in their garden because they thought they looked pretty or making a landscape more attractive to the tourists. Seeds of the Henbit can be purchased for planting into the gardens or the landscapes from different parts of the world where it is native. A lot of people think that the Henbit is a beautiful weed because of its purple petals that flowers during the early spring season and they often mistake it as a flower. (1, 4)

Distribution of the Henbit can be found nationwide especially in the western part of the United States and can be found in every state except for Alaska. Henbit likes to grow in gardens, open areas, meadows, and fields which is what most of the western part of the country’s terrain looks like. (2) It can grow in almost any type of climate making it resilient to harsh winters that happen in the mountain west and the Midwest part of the country. This makes it easier for the Henbit to spread its seeds and survive throughout the country with varying types of climate. (2,4)

When the Henbit is introduced to a new environment it can out compete the native species and threaten the biodiversity. In some cases, it can completely replace the entire native vegetation in the environment. Threatened natural vegetation includes pastures, grasses, gardens, and landscapes. Economic impact of the Henbit is so high that it is declared as a noxious pest by the United States government.

Cultural control is an intensive agriculture practice to prevent the Henbit seedlings from becoming mature in growth and increasing its population in the environment. This is a long-term process that includes fertilizing, irrigating, or revegetation to promote the growth of the native species to resist the invasive species that has taken over their environment. Mechanical control is when the Henbit is completely removed by hand from the environment. (3) This includes pulling it out of the ground or any hand tools to remove it.

Biological control is when other animals, pests, or organisms are used to control or remove the Henbit from the environment. Chemical control is when different herbicides are used to remove the Henbit from the environment. Integrated control is primarily used in horticultural and agronomic crops which is managed with a combination of mechanical, chemical, and cultural control practices. When it establishes itself in an area it becomes a huge part of the environment with propagation of its seeds. Providing food for other animals, nectar for the pollinators, and the seeds provide food for the birds.

Most of the general American population do not view it as an invasive species due to its attractiveness of its pink to purple colored petals when it flowers in the early spring. Certain times of year when there are not enough insects to pollinate the plants in the environment the Henbit will self-pollinate to help create offspring containing its genes. Even though the Henbit is considered an invasive species in the United States it does have a positive effect on the environment. (3, 6)

Scientific name is the Lamium amplexicaule and the common name is the Henbit. Origination of the Henbit is from Europe, Africa, Asia, and the Mediterranean region which had an increase in distribution around the world during the 1800s. Henbit had various ways of being introduced into the United States and allowing it to become an invasive species. Henbit can be found across the entire United States especially in the western part of the country. When it is introduced to a new environment it will out compete the other native species. Practices used to control or eliminate the Henbit include cultural control, mechanical control, biological control, chemical control, and integrated control.

Distribution of Spotted Knapweed in Michigan

Is Weed Good or Bad for You?

Effects of the Weed Industry on Humboldt County

Why does People Consume Weed/Marijuana?