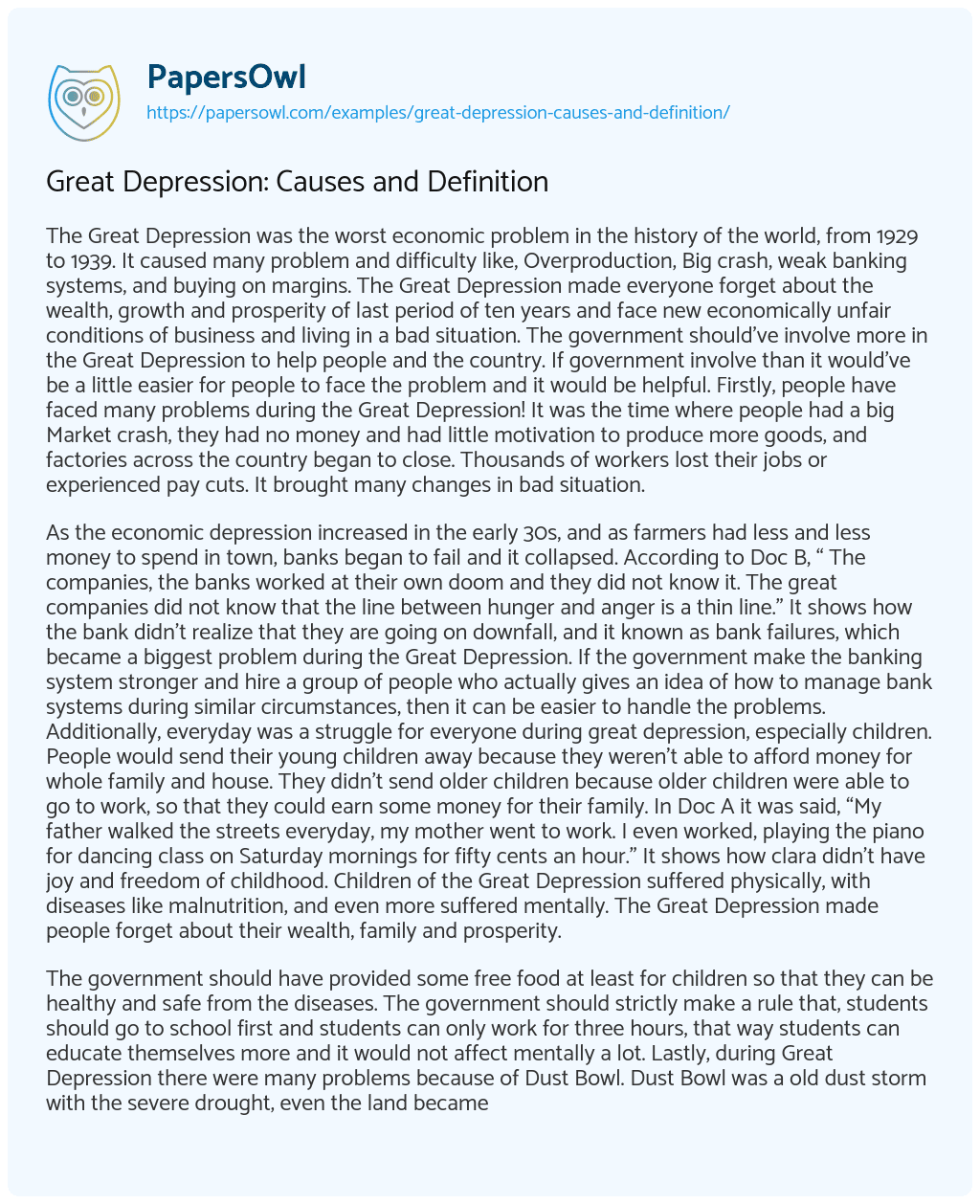 The Great Depression was the worst economic problem in the history of the world, from 1929 to 1939. It caused many problem and difficulty like, Overproduction, Big crash, weak banking systems, and buying on margins. The Great Depression made everyone forget about the wealth, growth and prosperity of last period of ten years and face new economically unfair conditions of business and living in a bad situation. The government should’ve involve more in the Great Depression to help people and the country. If government involve than it would’ve be a little easier for people to face the problem and it would be helpful. Firstly, people have faced many problems during the Great Depression! It was the time where people had a big Market crash, they had no money and had little motivation to produce more goods, and factories across the country began to close. Thousands of workers lost their jobs or experienced pay cuts. It brought many changes in bad situation.

As the economic depression increased in the early 30s, and as farmers had less and less money to spend in town, banks began to fail and it collapsed. According to Doc B, “ The companies, the banks worked at their own doom and they did not know it. The great companies did not know that the line between hunger and anger is a thin line.” It shows how the bank didn’t realize that they are going on downfall, and it known as bank failures, which became a biggest problem during the Great Depression. If the government make the banking system stronger and hire a group of people who actually gives an idea of how to manage bank systems during similar circumstances, then it can be easier to handle the problems. Additionally, everyday was a struggle for everyone during great depression, especially children. People would send their young children away because they weren’t able to afford money for whole family and house. They didn’t send older children because older children were able to go to work, so that they could earn some money for their family. In Doc A it was said, “My father walked the streets everyday, my mother went to work. I even worked, playing the piano for dancing class on Saturday mornings for fifty cents an hour.” It shows how clara didn’t have joy and freedom of childhood. Children of the Great Depression suffered physically, with diseases like malnutrition, and even more suffered mentally. The Great Depression made people forget about their wealth, family and prosperity.

The government should have provided some free food at least for children so that they can be healthy and safe from the diseases. The government should strictly make a rule that, students should go to school first and students can only work for three hours, that way students can educate themselves more and it would not affect mentally a lot. Lastly, during Great Depression there were many problems because of Dust Bowl. Dust Bowl was a old dust storm with the severe drought, even the land became dry and hot. As the land became dry and hot, it killed the crops. The high winds kicked dry soil and formed into cloud of dust. It was also known as the worst drought towards North America. The drought and dust destroyed a biggest part of U.S agriculture. As said in Doc C “ Well, the price was up and the rain came down, And I hauled my crops all in to town. … Rain quit and the wind got high, And a black old dust storm filled the sky. And I swapped my farm for a Ford machine”. It shows how easily in a second a man lost his farm. The drought and dust destroyed a biggest part of U.S agriculture. Many Farmers and ranchers destroy their farms and People had to only survived on milk, cornbread and beans. During the Dust Bowl the government should’ve give them at least few shelters to live until they can’t find new job and house, so it would be easy for people to at least manage other things. The government can also give some money to people who are actually too poor! In conclusion, the Great Depression has made problems throughout the countries. All people lost their happy lifestyles, children suffered with the diseases, economically unfair conditions of businesses, banks and companies collapsed. People lost their farms and houses due to Dust Bowl and Bank failure. It was the longest and strongest period of Depression which the western world has ever experienced.