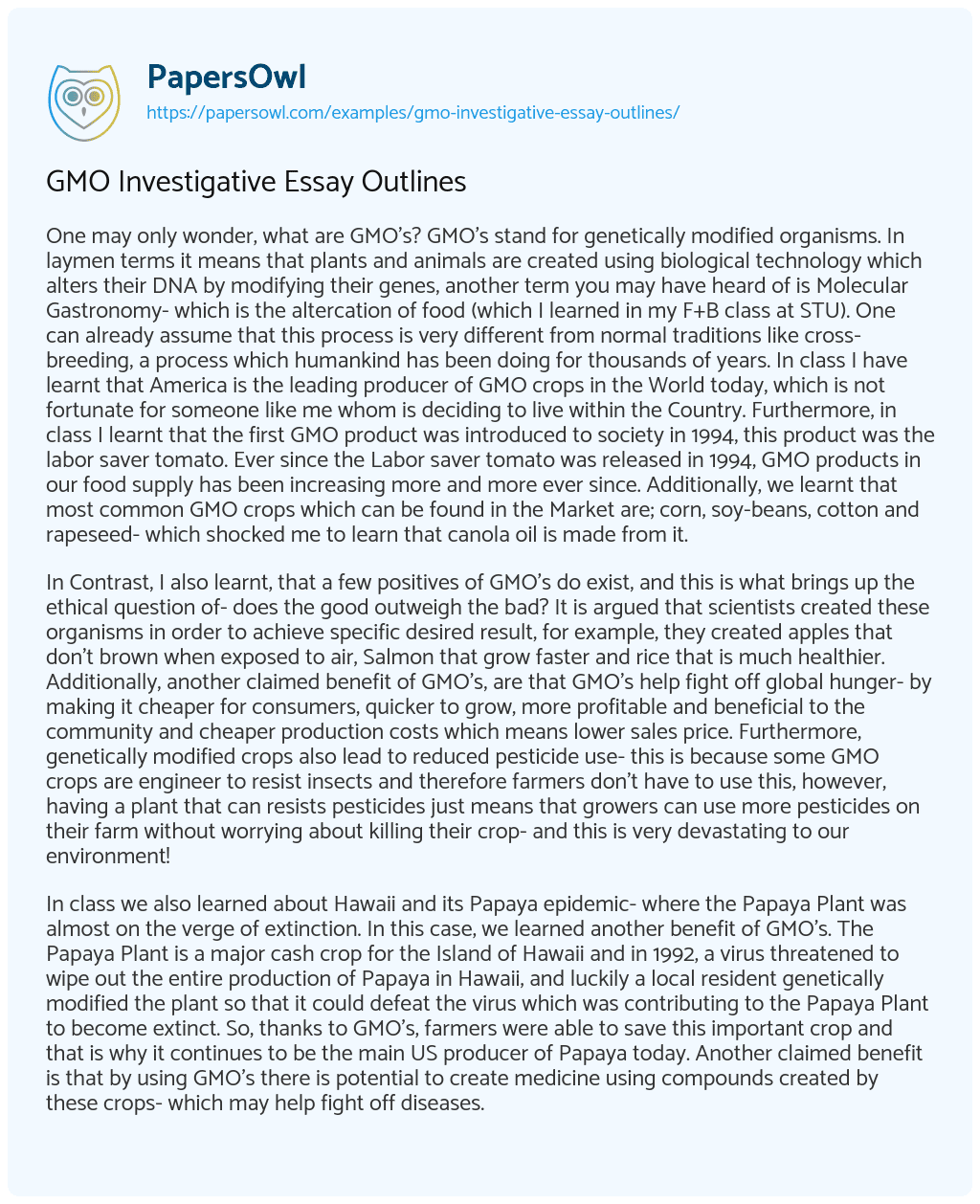 One may only wonder, what are GMO’s? GMO’s stand for genetically modified organisms. In laymen terms it means that plants and animals are created using biological technology which alters their DNA by modifying their genes, another term you may have heard of is Molecular Gastronomy- which is the altercation of food (which I learned in my F+B class at STU). One can already assume that this process is very different from normal traditions like cross-breeding, a process which humankind has been doing for thousands of years. In class I have learnt that America is the leading producer of GMO crops in the World today, which is not fortunate for someone like me whom is deciding to live within the Country. Furthermore, in class I learnt that the first GMO product was introduced to society in 1994, this product was the labor saver tomato. Ever since the Labor saver tomato was released in 1994, GMO products in our food supply has been increasing more and more ever since. Additionally, we learnt that most common GMO crops which can be found in the Market are; corn, soy-beans, cotton and rapeseed- which shocked me to learn that canola oil is made from it.

In Contrast, I also learnt, that a few positives of GMO’s do exist, and this is what brings up the ethical question of- does the good outweigh the bad? It is argued that scientists created these organisms in order to achieve specific desired result, for example, they created apples that don’t brown when exposed to air, Salmon that grow faster and rice that is much healthier. Additionally, another claimed benefit of GMO’s, are that GMO’s help fight off global hunger- by making it cheaper for consumers, quicker to grow, more profitable and beneficial to the community and cheaper production costs which means lower sales price. Furthermore, genetically modified crops also lead to reduced pesticide use- this is because some GMO crops are engineer to resist insects and therefore farmers don’t have to use this, however, having a plant that can resists pesticides just means that growers can use more pesticides on their farm without worrying about killing their crop- and this is very devastating to our environment!

In class we also learned about Hawaii and its Papaya epidemic- where the Papaya Plant was almost on the verge of extinction. In this case, we learned another benefit of GMO’s. The Papaya Plant is a major cash crop for the Island of Hawaii and in 1992, a virus threatened to wipe out the entire production of Papaya in Hawaii, and luckily a local resident genetically modified the plant so that it could defeat the virus which was contributing to the Papaya Plant to become extinct. So, thanks to GMO’s, farmers were able to save this important crop and that is why it continues to be the main US producer of Papaya today. Another claimed benefit is that by using GMO’s there is potential to create medicine using compounds created by these crops- which may help fight off diseases.

In contrast, there are several environmental and health-related issues concerning the use of GMO’s. For example, the creation of genetically modified insect and weed resistant crops has increased the population of other pests and created insects and weeds that are also resistant to insecticides the herbicides. Another huge concern for GMO’s is genetic manipulation, which could lead to what’s known as super bugs (like Spider-Man), that may have potential dangers to society. Indirect effects also exist- an example of this would be the “Honey Bee.” Honey Bees love to fly out and seek pollen, nevertheless, how would they know which plants are genetically modified from which plants are not? They don’t know, and that’s the issue! So, it is only safe to say- that majority of the Honey in America is contaminated due to the strong GMO presence in America.

In conclusion, it is safe to say- avoiding GMO’s is your best bet! GMO’s have only been introduced in 1994, therefore research is still lacking. In order to see the true effects of GMO’s- it will need a longer life-cycle to actually see the harmful results. If you are unsure, and cannot locate the GMO-FREE Mark- then look for a 3rd party verification for example- a little butterfly with a green check mark. Information is out there. Be informed before you decide, because cheap Produce is not always healthy Produce.

The Positive and Negative Effects of GMO’s