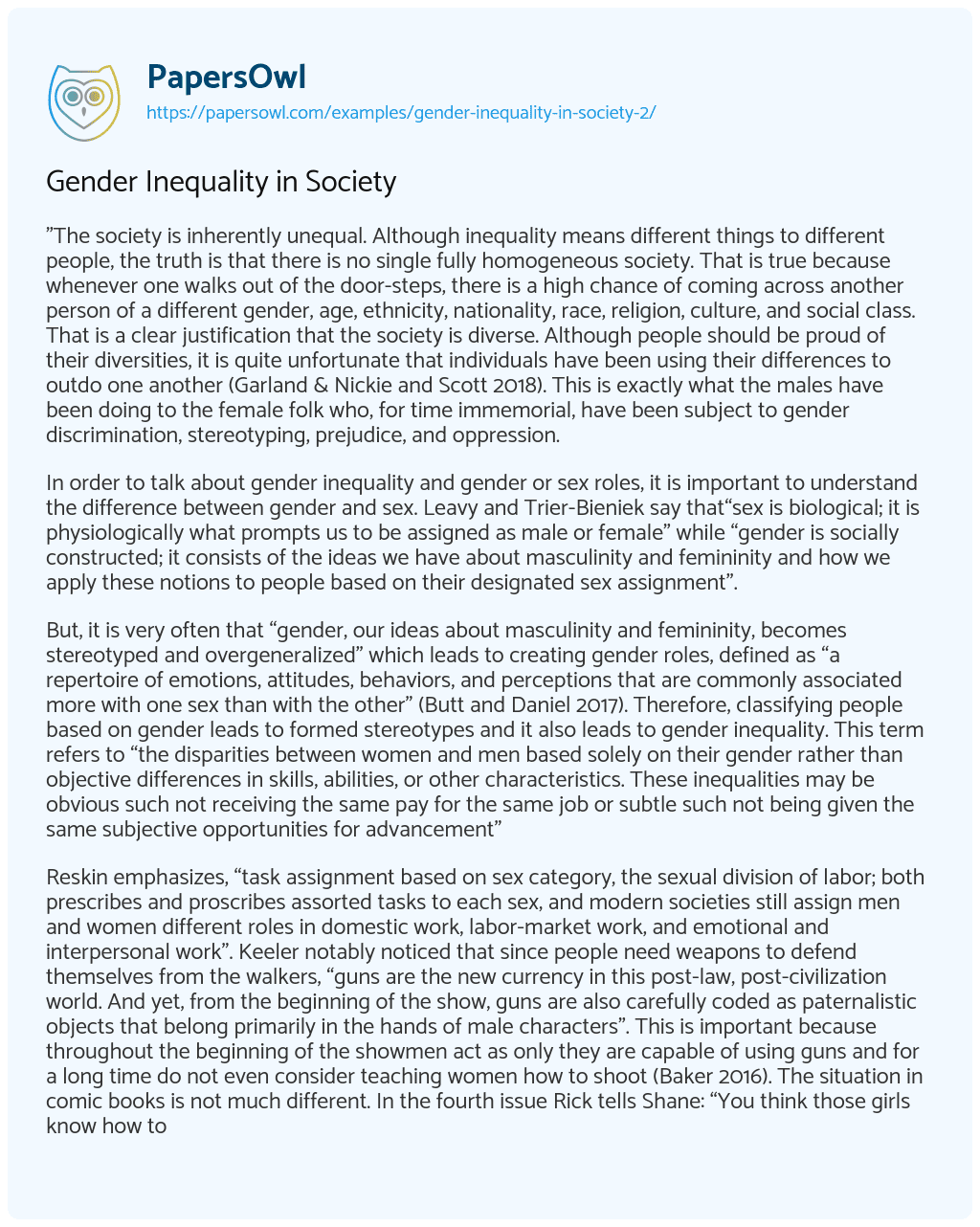 “The society is inherently unequal. Although inequality means different things to different people, the truth is that there is no single fully homogeneous society. That is true because whenever one walks out of the door-steps, there is a high chance of coming across another person of a different gender, age, ethnicity, nationality, race, religion, culture, and social class. That is a clear justification that the society is diverse. Although people should be proud of their diversities, it is quite unfortunate that individuals have been using their differences to outdo one another (Garland & Nickie and Scott 2018). This is exactly what the males have been doing to the female folk who, for time immemorial, have been subject to gender discrimination, stereotyping, prejudice, and oppression.

In order to talk about gender inequality and gender or sex roles, it is important to understand the difference between gender and sex. Leavy and Trier-Bieniek say that“sex is biological; it is physiologically what prompts us to be assigned as male or female” while “gender is socially constructed; it consists of the ideas we have about masculinity and femininity and how we apply these notions to people based on their designated sex assignment”.

But, it is very often that “gender, our ideas about masculinity and femininity, becomes stereotyped and overgeneralized” which leads to creating gender roles, defined as “a repertoire of emotions, attitudes, behaviors, and perceptions that are commonly associated more with one sex than with the other” (Butt and Daniel 2017). Therefore, classifying people based on gender leads to formed stereotypes and it also leads to gender inequality. This term refers to “the disparities between women and men based solely on their gender rather than objective differences in skills, abilities, or other characteristics. These inequalities may be obvious such not receiving the same pay for the same job or subtle such not being given the same subjective opportunities for advancement”

Reskin emphasizes, “task assignment based on sex category, the sexual division of labor; both prescribes and proscribes assorted tasks to each sex, and modern societies still assign men and women different roles in domestic work, labor-market work, and emotional and interpersonal work”. Keeler notably noticed that since people need weapons to defend themselves from the walkers, “guns are the new currency in this post-law, post-civilization world. And yet, from the beginning of the show, guns are also carefully coded as paternalistic objects that belong primarily in the hands of male characters”. This is important because throughout the beginning of the showmen act as only they are capable of using guns and for a long time do not even consider teaching women how to shoot (Baker 2016). The situation in comic books is not much different. In the fourth issue Rick tells Shane: “You think those girls know how to fight?” and then continues saying that everybody should have a gun because if Donna had had a gun, she would have been able to defend herself.

Although at first, it seems as Rick simply wants equality for everyone, this shows that women need men’s permission to have guns. It is true that there are not enough of them for everyone, but men have a right to them before women which is not fair since not all of them, besides Rick and Shane who were police officers, knew how to shoot before either. For example, Andrea in the comic books becomes one of the best shots as soon as she learns how to shoot and becomes more useful than most of the men. So, the only thing that is more equitable in comic books in comparison to the show is that men teach others how to shoot as soon as they get more guns. This is because they realized that then they can more easily defend themselves. On the other hand, the men in the show refuse to give the women the guns although that would help them survive. The best example is when the group has to defend themselves against the walkers and Carol’s daughter, Sophia, goes missing.

At the beginning, we can see Shane teaching Andrea how to reassemble her gun but he does not manage to show her the whole procedure because they had to fight against a herd of walkers they encountered. Andrea finds it hard to defend herself against one of them because she did not know how to put her gun back together so Dale saves her by giving her a screwdriver. After that, Dale takes Andrea’s gun and refuses to give it back. When they explain the situation to Shane, he agrees with Dale and says that everybody should give their guns to Dale because he believes that the group will be safer since shooting from a gun attracts walkers (Baker 2016). However, Shane does not turn over his gun because he knows how to use it, and only Rick, Daryl and he have a gun while searching for Sophia. Although, as Keeler emphasizes, Andrea did not misuse her gun but simply abandoned it, men found it as a good reason to take it away from her.

Furthermore, later on people from the group want to separate while looking for Sophia, and Rick wants to give his gun to his wife, Lori. She does not want to leave him without a gun, but Daryl has two so he gives her one of his. Not only that this is unfair and disrespectful to Andrea who directly asked for her gun, but it also shows that men can make and change rules however they want, especially without asking for women’s opinion. Although after some time Andrea did get a gun, “the narrative suggests that firearms belong in the hands of male characters”. As an example, Keeler mentions a scene when Andrea practices shooting with Shane and he yells at her, insults her and tells her that she is too emotional, showing us that “his tactics resonate with traditional notions of masculinity and femininity” (Baker 2016). Women are once again depicted as they show their emotions too much as expressing how they feel is something negative and they should be ashamed of it. But men’s emotions are not questioned which we can see when Rick and Lori’s twelve-year-old son, Carl, steals a gun but gets to keep it because Rick thinks they need to treat him as an adult. They did not argue with him as they did with Andrea, but rather agreed that he needs a gun for protection.”

Gender Inequality Throughout Genders of Society

Gender Inequality in Life and Literature