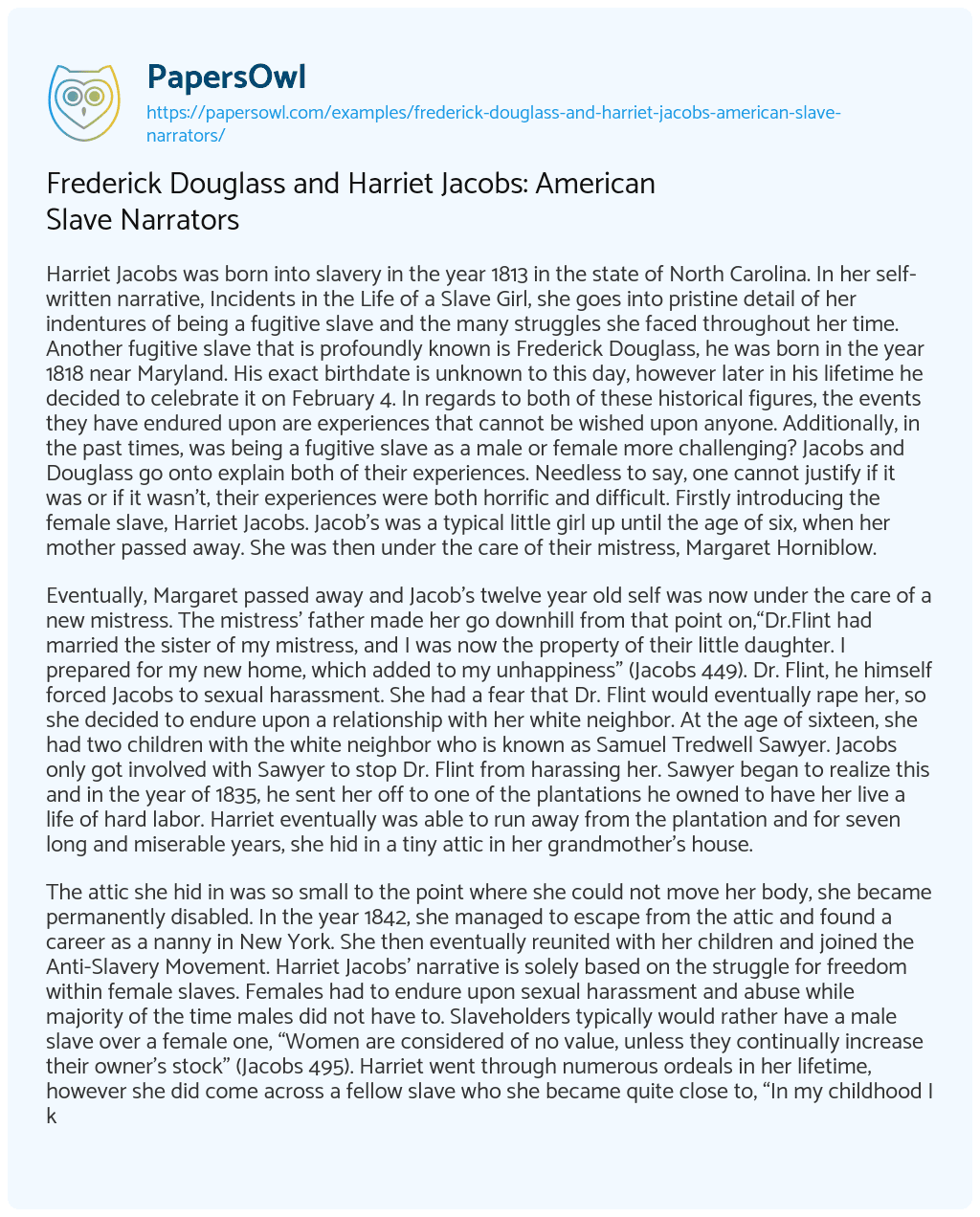 Harriet Jacobs was born into slavery in the year 1813 in the state of North Carolina. In her self-written narrative, Incidents in the Life of a Slave Girl, she goes into pristine detail of her indentures of being a fugitive slave and the many struggles she faced throughout her time. Another fugitive slave that is profoundly known is Frederick Douglass, he was born in the year 1818 near Maryland. His exact birthdate is unknown to this day, however later in his lifetime he decided to celebrate it on February 4. In regards to both of these historical figures, the events they have endured upon are experiences that cannot be wished upon anyone. Additionally, in the past times, was being a fugitive slave as a male or female more challenging? Jacobs and Douglass go onto explain both of their experiences. Needless to say, one cannot justify if it was or if it wasn’t, their experiences were both horrific and difficult. Firstly introducing the female slave, Harriet Jacobs. Jacob’s was a typical little girl up until the age of six, when her mother passed away. She was then under the care of their mistress, Margaret Horniblow.

Eventually, Margaret passed away and Jacob’s twelve year old self was now under the care of a new mistress. The mistress’ father made her go downhill from that point on,“Dr.Flint had married the sister of my mistress, and I was now the property of their little daughter. I prepared for my new home, which added to my unhappiness” (Jacobs 449). Dr. Flint, he himself forced Jacobs to sexual harassment. She had a fear that Dr. Flint would eventually rape her, so she decided to endure upon a relationship with her white neighbor. At the age of sixteen, she had two children with the white neighbor who is known as Samuel Tredwell Sawyer. Jacobs only got involved with Sawyer to stop Dr. Flint from harassing her. Sawyer began to realize this and in the year of 1835, he sent her off to one of the plantations he owned to have her live a life of hard labor. Harriet eventually was able to run away from the plantation and for seven long and miserable years, she hid in a tiny attic in her grandmother’s house.

The attic she hid in was so small to the point where she could not move her body, she became permanently disabled. In the year 1842, she managed to escape from the attic and found a career as a nanny in New York. She then eventually reunited with her children and joined the Anti-Slavery Movement. Harriet Jacobs’ narrative is solely based on the struggle for freedom within female slaves. Females had to endure upon sexual harassment and abuse while majority of the time males did not have to. Slaveholders typically would rather have a male slave over a female one, “Women are considered of no value, unless they continually increase their owner’s stock” (Jacobs 495). Harriet went through numerous ordeals in her lifetime, however she did come across a fellow slave who she became quite close to, “In my childhood I knew a valuable slave, named Charity, and loved her” (Jacobs 493). Charity was a slave herself, however, her son James, was sold to a slave master. James was routinely whipped by his owner, he eventually escaped to the woods to try and save himself. James was captured back to his master, where his master then sent him to punishment, “After the overseer should have whipped him to his satisfaction, to have him placed between the screws of the cotton gin, to stay as long as he had been in the woods” (Jacobs 494). James would receive only one piece of bread and a cup of water every morning, after only four days of being in the bin, he died.

Jacobs was devastated and did not tell Charity, as she knew it would only make matters worse, “There are wrongs which even the grave does not bury” (Jacobs 501). Additionally, Frederick Douglass’ life as a fugitive slave was not much better than Jacobs. When Douglass is first born, he is separated from his mother, her name is Harriet Bailey. Frederick Douglass’ real name is Frederick Bailey, however there comes a point in his life when he becomes known as Douglass. Captain Anthony is Douglass’ father, who he is a clerk of a man named Colonel Lloyd. He owns hundreds of slaves, the plantation where they slaves are at, Lloyd calls it the ‘Great House Farm’. Lloyd’s plantation was in the South and like many other plantations that were located around there, life was brutal living there. The slaves who worked on the fields only by law received one day off which was typically on Sundays, this did not apply to the house slaves.

However, Douglass’ life on the plantation was not as brutal as the other slaves, being a child he worked in the households, not on the fields. At the age of seven, he was handed off to his father’s son-in-laws brother, Hugh Auld. Auld took Douglass to Baltimore, where he lived a much more freedom filled life, for some time. Sophia Auld, who is the wife of Hugh, she never owned slaves before, so at first she is very gracious to Douglass and even starts teaching him how to read. Although, Hugh orders her to stop immediately stating that teaching slaves education makes them unmanageable. Douglass took matters into his own hands and learned to read and write from the other local slaves. He eventually learned all of the hidden aspects of slavery and also about the anti-slavery movement. After realizing this, he escaped to the North. His escape did not last long, Douglass was soon taken back to serve Thomas Auld when his father passed away.

Thomas Auld sought out to believe that Douglass was unmanageable, he sent him to a man by the name of Edward Covey. Covey was known for “breaking slaves” after the time Douglass spent here, he was no longer a strong-willed and freedom seeking man, he was only longing for rest due to his sleep deprivation and injuries, “Thus slavery is the enemy of both the slave and the slaveholder” (Douglass). After his one year spent with Covey, he is then owned by a man named William Freeland. While his time spent here, Douglass manages to educate his fellow slaves in a school of free blacks. Douglass tries to escape another time with three fellow slaves, however, one of the slaves betrays him and he is taken to jail. He is then sent to Baltimore once more, where he learned the trade of ship caulking. This is the point when Douglass runs into racial discrimination.

At the industry, whites are working alongside free blacks, however, the whites suddenly believe that the amount of free blacks will start taking their jobs which they believe are entitled to before the free blacks are. After his time spent at the industry, Douglass earns the highest wage possible and makes his escape to New York. Douglass changes his name in fear of being taken back to his slave owner. He eventually meets a free women by the name of Anne Murray and they proceed to get married. Douglass goes onto to become a writer and very involved with the abolitionist movement.

In conclusion, life as fugitive slave was just plain out rough. Female and male slaves encountered different levels and forms of punishment, different job duties, and different ways of being treated. “What to an American is your 4th of July?” (Douglass), fugitive slaves had no rights granted to them, they were overworked, starved, and barely had a piece of clothing on their backs. A slave was just a slave in the owers eyes, however, he or she was still human being. These two historical figures describe in phenomenal detail of what it was truly like. Douglass and Jacobs both shown to the American world that although the hardships come and go, nothing is permanent, even a life of a fugitive slave, “If there is no struggle, there is no progress” (Douglass). The experiences they encountered are horrific and although female and male slaves were different in many aspects, one was not a better lifestyle nor more challenging than the other.