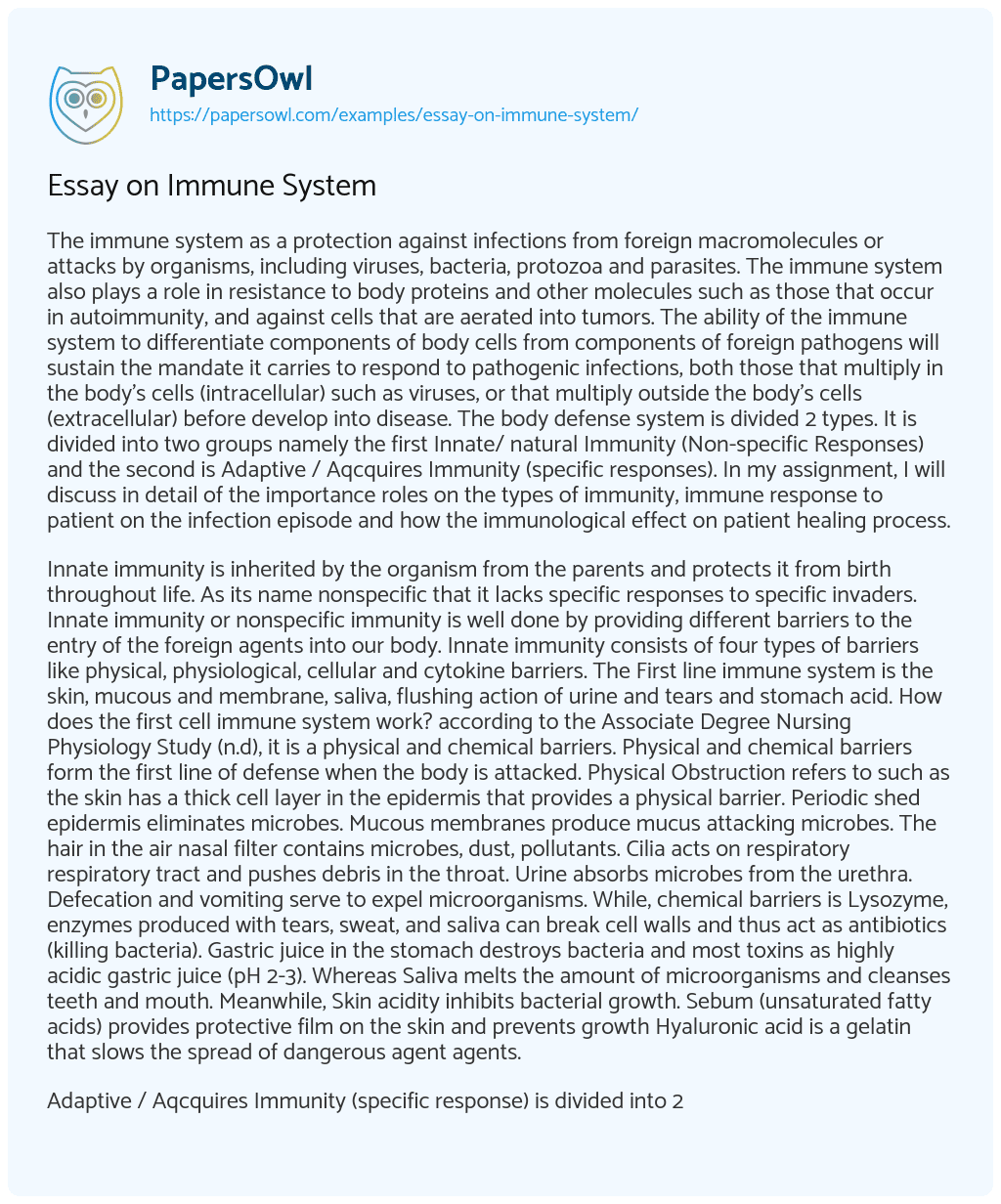 The immune system as a protection against infections from foreign macromolecules or attacks by organisms, including viruses, bacteria, protozoa and parasites. The immune system also plays a role in resistance to body proteins and other molecules such as those that occur in autoimmunity, and against cells that are aerated into tumors. The ability of the immune system to differentiate components of body cells from components of foreign pathogens will sustain the mandate it carries to respond to pathogenic infections, both those that multiply in the body’s cells (intracellular) such as viruses, or that multiply outside the body’s cells (extracellular) before develop into disease. The body defense system is divided 2 types. It is divided into two groups namely the first Innate/ natural Immunity (Non-specific Responses) and the second is Adaptive / Aqcquires Immunity (specific responses). In my assignment, I will discuss in detail of the importance roles on the types of immunity, immune response to patient on the infection episode and how the immunological effect on patient healing process.

Innate immunity is inherited by the organism from the parents and protects it from birth throughout life. As its name nonspecific that it lacks specific responses to specific invaders. Innate immunity or nonspecific immunity is well done by providing different barriers to the entry of the foreign agents into our body. Innate immunity consists of four types of barriers like physical, physiological, cellular and cytokine barriers. The First line immune system is the skin, mucous and membrane, saliva, flushing action of urine and tears and stomach acid. How does the first cell immune system work? according to the Associate Degree Nursing Physiology Study (n.d), it is a physical and chemical barriers. Physical and chemical barriers form the first line of defense when the body is attacked. Physical Obstruction refers to such as the skin has a thick cell layer in the epidermis that provides a physical barrier. Periodic shed epidermis eliminates microbes. Mucous membranes produce mucus attacking microbes. The hair in the air nasal filter contains microbes, dust, pollutants. Cilia acts on respiratory respiratory tract and pushes debris in the throat. Urine absorbs microbes from the urethra. Defecation and vomiting serve to expel microorganisms. While, chemical barriers is Lysozyme, enzymes produced with tears, sweat, and saliva can break cell walls and thus act as antibiotics (killing bacteria). Gastric juice in the stomach destroys bacteria and most toxins as highly acidic gastric juice (pH 2-3). Whereas Saliva melts the amount of microorganisms and cleanses teeth and mouth. Meanwhile, Skin acidity inhibits bacterial growth. Sebum (unsaturated fatty acids) provides protective film on the skin and prevents growth Hyaluronic acid is a gelatin that slows the spread of dangerous agent agents.

Adaptive / Aqcquires Immunity (specific response) is divided into 2 types, namely Natural and Artificial. Each of which can be divided into Actives and Passive immunity. Immunity acquired Active is actively acquired when individuals are exposed to live pathogens, developing a disease, and then developing immunity. Immunity is a state of protection against infectious diseases provided either by immune response. It results from immunization or previous infection, or other non-immune factors. There are two ways to get active resistance to attacking microbes, that is active natural and active artificial. According David Baxter (2007), “Active and passive immunity, vaccine types, excipients and licensing, Occupational Medicine” explaining that, Active immunity refers to the process of exposing the body to an antigen to generate an adaptive immune response. The response takes maybe days or weeks to develop but may be long lasting even lifelong. Active immunity is usually classified as natural or acquired. Passive Immunity refers to the process of providing IgG antibodies to protect against infection. It gives immediate, but short-lived protection and several weeks to 3 or 4 months at most. Passive immunity is usually classified as natural or acquired.

For example, open wounds and contamination caused by sharp objects. If the skin is damage, the pathogen easily enters the body. This caused a change in the structure and local physiology of the tissue damage. When injuries occur, our body will cause vascular and cellular changes.

Referring to Encyclopedia Britannica (2018), “vascular changes” first injury tissue occurs, the small blood vessels in the damaged area will become narrow for a moment. Known for the vasoconstriction process. This occurs in the transient phase and inflammatory response, vasodilation blood vessels, increases blood flow to the injured area. Vasodilation may last from 15 minutes to several hours. Then, the blood vessel walls, which usually only allow water and salt to pass easily, become more permeable. A rich protein liquid, called exudate and it comes out of the tissue. Materials in exudate include clotting factors, which help prevent the spread of infectious agents throughout the body. Other proteins and antibodies help to destroy the microorganisms found in the wound. The injured area will become damp. Then white blood cells will accumulate and attach to tissues and blood vessels. This is the first transfer to the extravascular space.

Regarding Encyclopedia Britannica (2018), “Cellular changes” The most important feature of inflammation is the accumulation of white blood cells at the site of injury. Foreign particles and bacteria are eaten and are passed by most leukocyte cells (phagocytes). It will purge cellular debris due to injury. When the cells have been activated, the neutrophil will act to damage the cell of the foreign body. Neutrophil is a type of white blood cell that contains enzyme granules capable of destroying and damaging foreign body cells. Sources of neutrophil numbers can be obtained from within the blood vessels and bone marrow. Depending on the size of the injury, if the number of neutrophils is sufficient then the source will only be supplied from the blood vessels only. If the number of neutrophils in the blood vessels does not cope, the neutrophils from the bone marrow will supply. According Janeway CA. et al(2001), “Chapter 9 The Humoral Immune Response”. Humoral immune response protects extracellular space. Because cell B will produce antibodies to eradicate extracellular microorganisms and prevent the spread of intracellular infections. Cell activation B and their differentiation into plasma cells that cure antibodies are triggered by antigens and usually require T helper cells. Cell T-Helper also controls isotypes and has a role in starting somatic hyper mutation gene for genetic antibody variables. Antibodies contribute to immunity in three major ways. To enter the cells, the virus and intracellular bacteria are tied to a certain molecule on the surface of the target cell. Pathogens are neutralized by antibodies with their binding action. Neutrality is also important to prevent the toxins from entering the cells.

According Murphy, K. & Weaver, C. (2017). Immunobiology, Antigen Antibody’s Interactions and Effects, this refers to six levels. First is the phase of Prevention of attachment, effect is a pathogen coated with antibody is prevented from attaching to a cell. The second stage is clumping of antigens, antibodies can link antigens together, forming a cluster that phagocytes can ingest. Phase three, neutralization of toxins, where antibodies bind to toxin molecules to prevent them from damaging cells. Phase four, Help with phagocytosis ie phagocytes can attach more easily to antigens that are coated with antibody. The fifth stage, activation of complement is when complement attaches to antibody on a cell surface, a series of reaction begins that activates complement to destroys cells. The final stage refers to the activation of NK cells, NK cells responds to antibody adhering to a cell surface and attack the cell.

Immunological effect on patient healing process. In this topic I will associate and explain the types of inflammation, steps of inflammation, inflammatory response, process of inflammation and cell death. Inflammation is divided into two types namely acute and chronic. Acute inflammation has a short onset and duration. Chronic inflammation has a longer onset and duration. There are five (5) steps of inflamation known as 5R’s. Recognition of injurious agent, Recruitment of leukocytes, Removal of agent, Regulation of the response and Resolution. Inflammatory response, it occurs first bacteria and other pathogens enter wound, platelets from blood release blood clotting proteins at wound site, mast cell secrete factors that mediate vasodilation and vascular contriction. Delivery of blood, plasma, and cells to injured area increases. Neutrophils secrete factors that kill and degrade pathogens. Neutrophills and macrophages remove pathogens. Macrophages secrete hormones called cytokines that attract immune system cells to the site and activate cells involved in tissue repair. After that, inflammatory response continues until the foreign metarial is eliminated and the wound repaired. how the process of inflammation, according to the process of inflammation. The tissue damage caused by chemical signal surch as histamins. then dilation and increased leakiness of local blood vessels, allowing migration of phagocytes and clotting factors to the area. After that, phagocytes (white blood cells) consume bacteria and damages cells, allowing tissue to heal. Platelets move out of the capillary to seal the wound area.

How does cell death occur? According Cristiana Pistol Tanase (2012), “Apoptosis refers to the falling off of the petals of the flowers and hyperplastic and neoplastic lesions”. But according he historical development of the cell death concept is reviewed, with special attention to the origin of the terms necrosis, coagulation necrosis, autolysis, physiological cell death, programmed cell death, chromatolysis (the first name of apoptosis in 1914), karyorhexis, karyolysis, and cell suicide, of which there are three forms: by lysosomes, by free radicals, and by a genetic mechanism (apoptosis). Starting from healthy cells and occurrence of contaminated injuries. Cells physical, chemical, infection, bacterial toxins, fungal infection and nutritional deprivation. There will be 2 conditions namely Oncosis and Apoptosis.Organells swelling and chromatins in nucleus clumps. Then switch to Blebbing process, it blebs from structure of nucleus changes. This phases of cell phase will occur in Budding, the membrane bound Apoptotic Bodies. Thus, necrosis occurs in cell membrane disintegration cytosolie spillout, and the occurrence of cellular explosion inflammation. While Apoptosis is, eziymes digest cytosolic components, nuclear DNA fragments lamina and cytoskeleton are digested. then the process of budding or bleebing. then the cell will be Apoptosis that is adjoining healthy celss phagocytose apoptoyic bodies. Eventually the phogocytosis process occurs.

As a conclusion, the body’s defense system can be divided into two parts, Innate / natural Immunity (Non-specific Responses) and the second is Adaptive / Aqcquires Immunity (specific responses). Adaptive is divided into 2 parts which are natural and artificial. It can be divided into active and passive. I have explained Start from the entry for the pathogen. Discuss briefly the vascular changes and cellular changes. Activation of the innate immunity, progression to humoral immunity and progression of cellular immunity. Immunological effect on patient healing process. In this topic I will done explain the types of inflammation, steps of inflammation, inflammatory response, process of inflammation and cell death.

Immunity – Humans are Exposed with Microbes