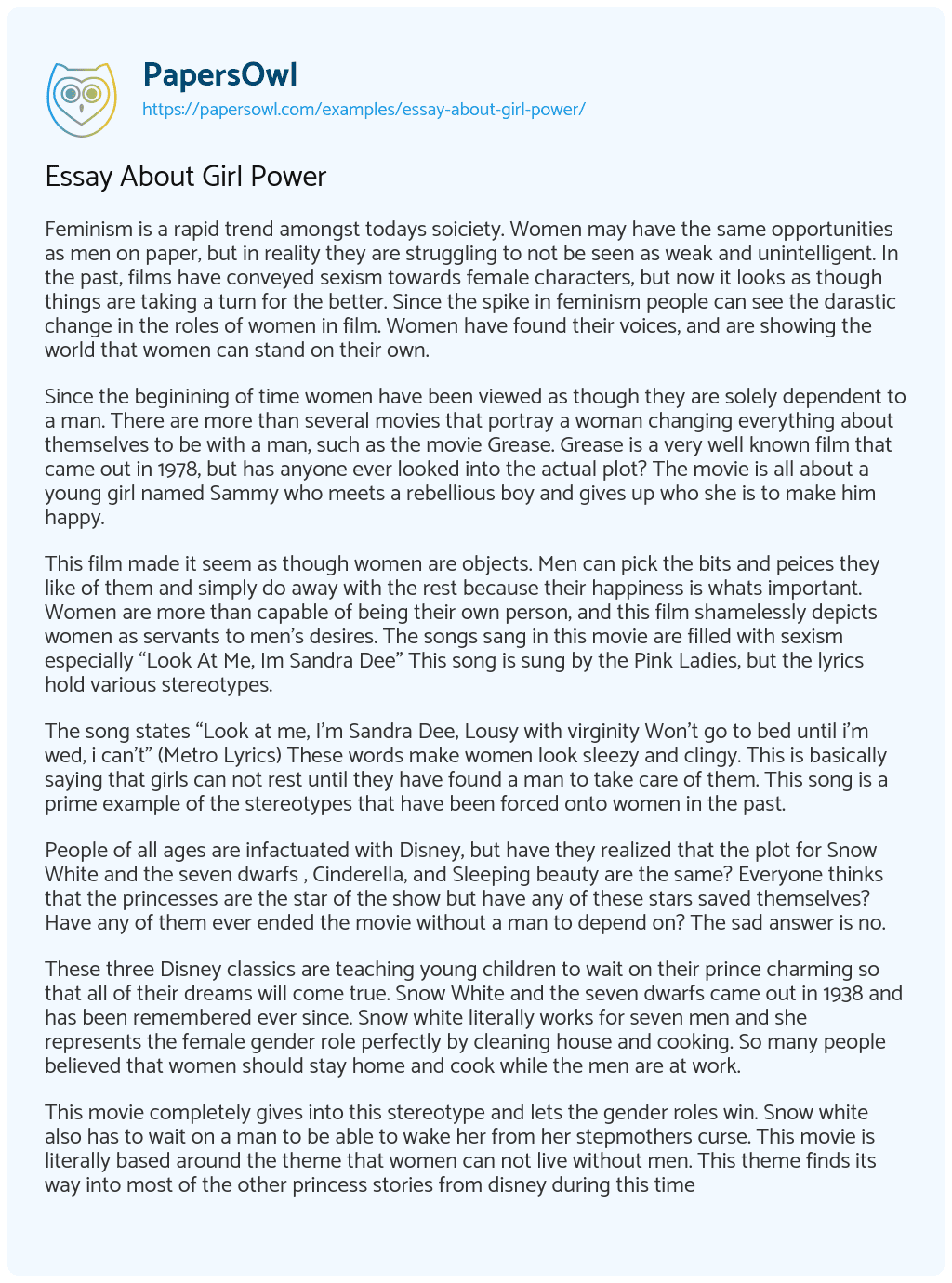 Feminism is a rapid trend amongst todays soiciety. Women may have the same opportunities as men on paper, but in reality they are struggling to not be seen as weak and unintelligent. In the past, films have conveyed sexism towards female characters, but now it looks as though things are taking a turn for the better. Since the spike in feminism people can see the darastic change in the roles of women in film. Women have found their voices, and are showing the world that women can stand on their own.

Since the beginining of time women have been viewed as though they are solely dependent to a man. There are more than several movies that portray a woman changing everything about themselves to be with a man, such as the movie Grease. Grease is a very well known film that came out in 1978, but has anyone ever looked into the actual plot? The movie is all about a young girl named Sammy who meets a rebellious boy and gives up who she is to make him happy.

This film made it seem as though women are objects. Men can pick the bits and peices they like of them and simply do away with the rest because their happiness is whats important. Women are more than capable of being their own person, and this film shamelessly depicts women as servants to men’s desires. The songs sang in this movie are filled with sexism especially “Look At Me, Im Sandra Dee” This song is sung by the Pink Ladies, but the lyrics hold various stereotypes.

The song states “Look at me, I’m Sandra Dee, Lousy with virginity Won’t go to bed until i’m wed, i can’t” (Metro Lyrics) These words make women look sleezy and clingy. This is basically saying that girls can not rest until they have found a man to take care of them. This song is a prime example of the stereotypes that have been forced onto women in the past.

People of all ages are infactuated with Disney, but have they realized that the plot for Snow White and the seven dwarfs , Cinderella, and Sleeping beauty are the same? Everyone thinks that the princesses are the star of the show but have any of these stars saved themselves? Have any of them ever ended the movie without a man to depend on? The sad answer is no.

These three Disney classics are teaching young children to wait on their prince charming so that all of their dreams will come true. Snow White and the seven dwarfs came out in 1938 and has been remembered ever since. Snow white literally works for seven men and she represents the female gender role perfectly by cleaning house and cooking. So many people believed that women should stay home and cook while the men are at work.

This movie completely gives into this stereotype and lets the gender roles win. Snow white also has to wait on a man to be able to wake her from her stepmothers curse. This movie is literally based around the theme that women can not live without men. This theme finds its way into most of the other princess stories from disney during this time period. Cinderella lived a terrible life until a man had to come in and save her, and Aurora had to be awoken by a man jsut like Snow White. Disney used to make it seem as though the movies revolved around the women, but in reality they just had to be there to give the man more purpose.

Not only have films had sexism embedded into them , but even the covers of the movies do. Movie covers are full of sexist images. There are millions and millions of movie covers that show provocative parts of a woman. They are all quite similar. People can always see the male characters, but they never see the female’s. All that is available is her breast or legs. Is it not a shame that even the movie industry has sexualized women repetitively? Marcia Belksy, who has started an entire movement over the sexism in movie covers states that “By decapitating the woman, or fragmenting her body into decontextualized sexual parts, she becomes an unquestionably passive object to the male gaze.”

She then goes on to say that “ The question of her consent is removed completely alongside her head, and her purpose becomes solely that of being looked at by men obediently. Her value is that only of her sexual appeal to men, and not of her personhood.” (Marcia Belksy) The photos seen by the masses have been harmful to women in several ways, and still no one will put an end to it. People have been sexualizing women since creation but these photos take it to a new level. Some of these covers are basically pornography without consent.

Legally Blonde was released in 2001 and is still a hit today. While watch Legally Blonde for the first time it is hard to see the true message. At first sight the movie may seem as a empowing movie for women, but it is defeinitely not. The entirety of the movies plot is about a woman who devotes all of her time to go to Harvard and get her previous boyfriend back. She drops everything for a man who does not see her intelligence.

She does everything to get his attention while he already has a new girlfriend. This movie portray women as ignorant, insecure, and uncapable of living without a man. This movie also portrays women who are more attractive , such as Elle’s sorority sisters, as dumb. According to this movie you can not be both pretty and smart. ( Saban, 2013) Men ran this whole movie, and made women look gullible and idiotic.

When taking a look at the statistics regrading men and women it becomes obvious that women in movies are struggling. In the top grossing 1200 films from 2007 to 20018 only twenty eight percent of women were the lead or co lead. Are women and men not supposed to be equal? Because they definitely are not in movies. Women only accounted for thrity five percent of speaking roles in the top 100 grossing films, and women were only casted for twenty six percent of leaders in films. Women may be in the films, but men definitely take majority. While men get casted for work related parts at sixty six percent, women were casted for movies regarding their personal life at forty eight percent. (Women and Hollywood, 2018) It is evident that women are not known to have a successful career in film due to the stereotypes that have followed women.

Although the film industry has still been percieving women wrongly for some time they have now started to make a change. There are still several movies that degrade women, but there is beginning to be a healthy amount of empowering ones coming out recently too. Disney has even been making changes. In 2016 Disney released Moana. Moana is a movie about a young girl who is strong enough to save her land. She does not need a man to wake her up from a magical trance, or save her from her wicked step mother.

She takes charge and she represents women and young girls very well. Disney also released the movie Frozen. This movie shows that a queen does not always need a king. Women can be just as powerful as men, and the main character Elsa shows that very well. Melissa Leon from the daily beast even says that “ Frozen is a transitional step from movies like the nightmarishly retrograde Little Mermaid, to films that won’t need to explicitly tell little girls that true love doesn’t have to involve marrying a prince or being rescued.”(Leon, 2013) Frozen was a big step to sexual equality, and the roles of the women in it are great role models for children.

Not only has Disney begun to realize women’s worth so have several other movie companies. In 2017 Wonder woman came around and stole everyones heart. All of the recent super heroes have been men, but Diana is definitely not. The movie proves that not all strong super heroes have to be embodied by a man. Women can do it just as good, and maybe even better. In the movie Diana is a true leader, and she even defeats men. This movie was simply empowering.

Madhubanti, Senior Manager of “Linked in”, states that “If more and more directors muster up the courage to make movies with protagonists like Diana, the concept of heroism will, at last, transcend the gender barrier and people will hit the theater to watch some fantastic display of bravery, and valor without bothering about whether a male or female actor is in the lead” (Rudra, 2017) In most cases women are shown as weaker then men, but this truly gave women a step toward equality. Wonder woman is proof that men are not always phsically and mentally stronger. Women can fight their own battles, and this film made that very clear.

There have also been various films that regard to the fight for women’s rights that have came out recently. On the Basis of Sex is based on a true story about Ruth Ginsberg, the first woman to be Supreme court justice. In the film it tells the story of how she got to the position, and her struggles on the way. The movie shows how hard some women fought for their rights, and that women can be brave and intelligent. Although Ruth was played by an actor, she is still the true hero and it is amazing to have that story told to so many through film. ( Higdon, 2019)

The film industry may have percieved women as worthless before, but things are definitely changing. Women have proved their worth in this world, and though some do not see that, they are finding a way to show them once and for all. With feminism growing every day women are slowly but surely making it into the film industry, and they do not want to be stereotyped anymore. Stereotypes are blinding this world to the truth. Things should be shown as they truly are, not what people assume them to be. Some views are different than others, but sexism is a wicked plague. Equality should be shown to all, and women should not have to suffer from the illegible standard that has been forced upon them in movies.

Essay About Girl Power. (2020, May 14). Retrieved from https://papersowl.com/examples/essay-about-girl-power/

Themes of Gender and Sexuality in the Films