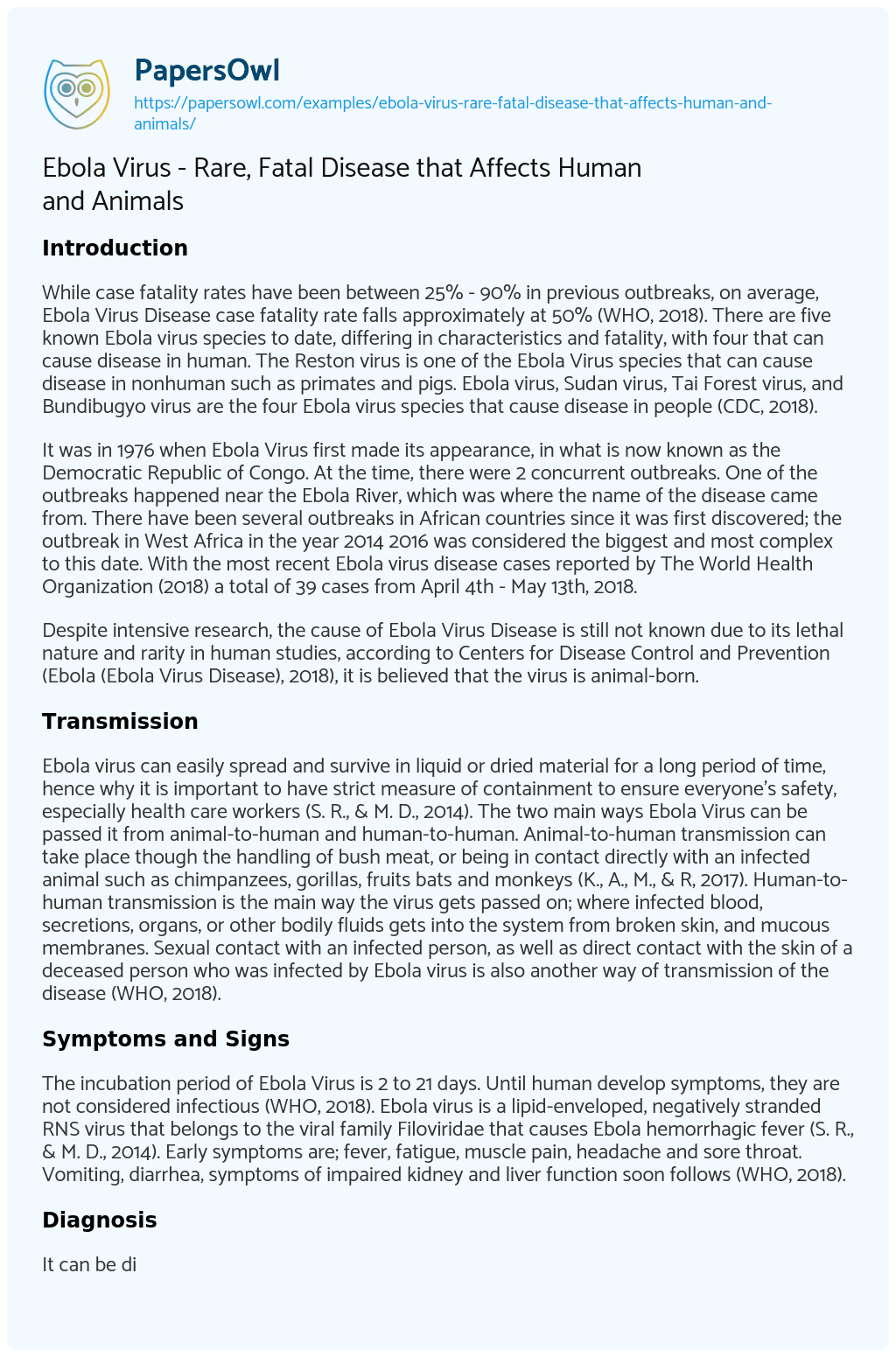 It was in 1976 when Ebola Virus first made its appearance, in what is now known as the Democratic Republic of Congo. At the time, there were 2 concurrent outbreaks. One of the outbreaks happened near the Ebola River, which was where the name of the disease came from. There have been several outbreaks in African countries since it was first discovered; the outbreak in West Africa in the year 2014 2016 was considered the biggest and most complex to this date. With the most recent Ebola virus disease cases reported by The World Health Organization (2018) a total of 39 cases from April 4th – May 13th, 2018.

Despite intensive research, the cause of Ebola Virus Disease is still not known due to its lethal nature and rarity in human studies, according to Centers for Disease Control and Prevention (Ebola (Ebola Virus Disease), 2018), it is believed that the virus is animal-born.

Ebola virus can easily spread and survive in liquid or dried material for a long period of time, hence why it is important to have strict measure of containment to ensure everyone’s safety, especially health care workers (S. R., & M. D., 2014). The two main ways Ebola Virus can be passed it from animal-to-human and human-to-human. Animal-to-human transmission can take place though the handling of bush meat, or being in contact directly with an infected animal such as chimpanzees, gorillas, fruits bats and monkeys (K., A., M., & R, 2017). Human-to-human transmission is the main way the virus gets passed on; where infected blood, secretions, organs, or other bodily fluids gets into the system from broken skin, and mucous membranes. Sexual contact with an infected person, as well as direct contact with the skin of a deceased person who was infected by Ebola virus is also another way of transmission of the disease (WHO, 2018).

It can be difficult to diagnose Ebola virus disease in its early stage as its symptoms are often vague and overlaps with a number of different diagnoses, including malaria, meningococcemia, typhoid fever, and other bacterial infections (K., A., M., & R, 2017). Laboratory diagnosis of Ebola virus can be done by polymerase chain reaction detection and virus isolation on Vero cells. Due to its lethalness, Ebola virus culture, considered as a class-4 pathogen has to be kept at a maximum containment facility. Enzyme-linked immunosorbent assays, also known as ELISAs test can be used to detect Ebola immunoglobulin (S. R., & M. D., 2014). Unfortunately laboratory tests result can take some time and most clinics do not always have it readily available.