Do not Judge People 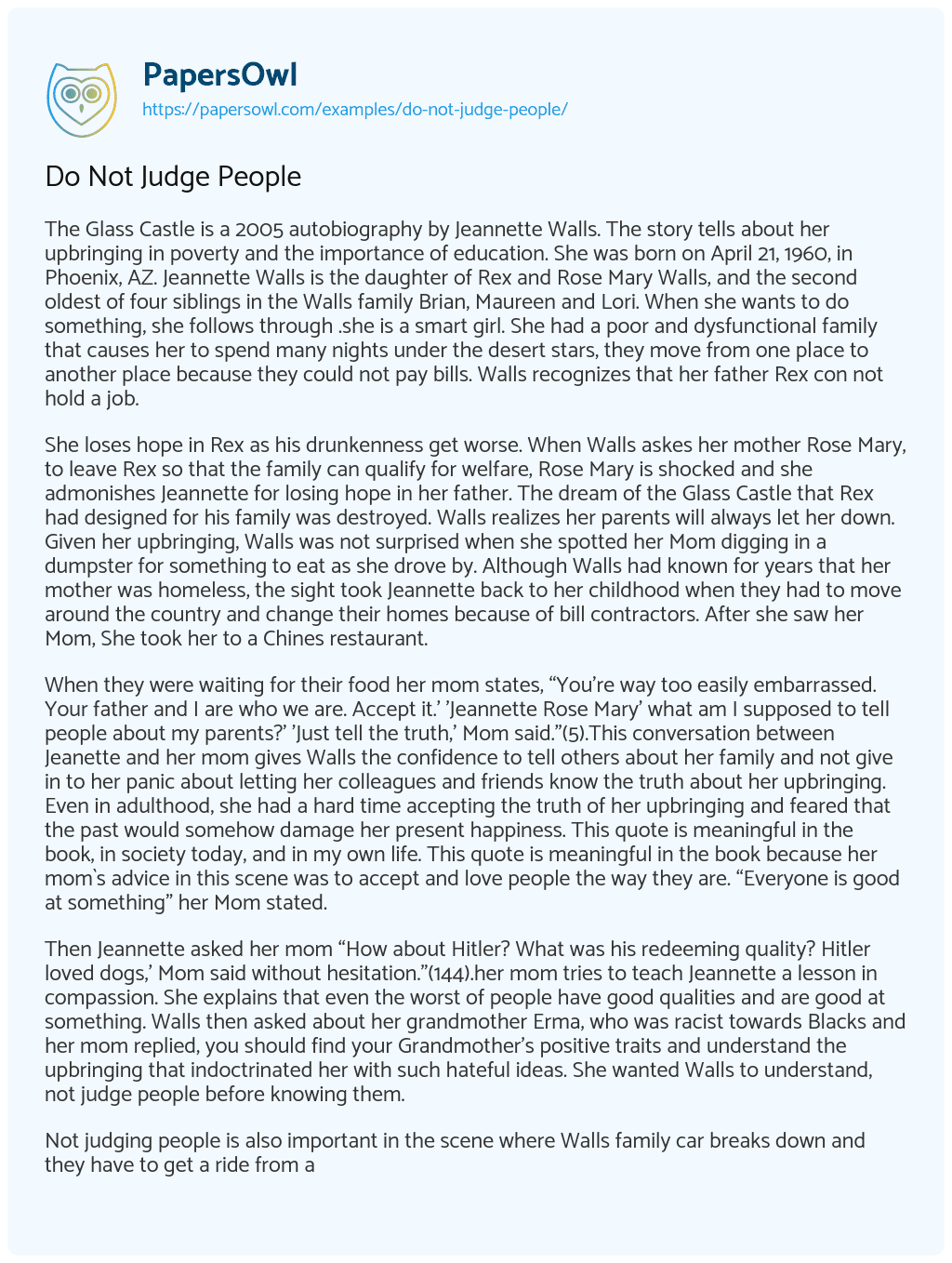 The Glass Castle is a 2005 autobiography by Jeannette Walls. The story tells about her upbringing in poverty and the importance of education. She was born on April 21, 1960, in Phoenix, AZ. Jeannette Walls is the daughter of Rex and Rose Mary Walls, and the second oldest of four siblings in the Walls family Brian, Maureen and Lori. When she wants to do something, she follows through .she is a smart girl. She had a poor and dysfunctional family that causes her to spend many nights under the desert stars, they move from one place to another place because they could not pay bills. Walls recognizes that her father Rex con not hold a job.

She loses hope in Rex as his drunkenness get worse. When Walls askes her mother Rose Mary, to leave Rex so that the family can qualify for welfare, Rose Mary is shocked and she admonishes Jeannette for losing hope in her father. The dream of the Glass Castle that Rex had designed for his family was destroyed. Walls realizes her parents will always let her down. Given her upbringing, Walls was not surprised when she spotted her Mom digging in a dumpster for something to eat as she drove by. Although Walls had known for years that her mother was homeless, the sight took Jeannette back to her childhood when they had to move around the country and change their homes because of bill contractors. After she saw her Mom, She took her to a Chines restaurant.

When they were waiting for their food her mom states, “You’re way too easily embarrassed. Your father and I are who we are. Accept it.’ ‘Jeannette Rose Mary’ what am I supposed to tell people about my parents?’ ‘Just tell the truth,’ Mom said.”(5).This conversation between Jeanette and her mom gives Walls the confidence to tell others about her family and not give in to her panic about letting her colleagues and friends know the truth about her upbringing. Even in adulthood, she had a hard time accepting the truth of her upbringing and feared that the past would somehow damage her present happiness. This quote is meaningful in the book, in society today, and in my own life. This quote is meaningful in the book because her mom`s advice in this scene was to accept and love people the way they are. “Everyone is good at something” her Mom stated.

Then Jeannette asked her mom “How about Hitler? What was his redeeming quality? Hitler loved dogs,’ Mom said without hesitation.”(144).her mom tries to teach Jeannette a lesson in compassion. She explains that even the worst of people have good qualities and are good at something. Walls then asked about her grandmother Erma, who was racist towards Blacks and her mom replied, you should find your Grandmother’s positive traits and understand the upbringing that indoctrinated her with such hateful ideas. She wanted Walls to understand, not judge people before knowing them.

Not judging people is also important in the scene where Walls family car breaks down and they have to get a ride from a woman who decided to help and take the Walls family back to their destination. The woman driving Jeanette and her family keeps referring to them poor and this upsets Jeanette causing her to say that her family is not poor. Trying to defend the dignity of her parents and siblings, Jeannette firmly asserts that the family is not poor and the woman quickly apologizes. Following this incident, Jeannette begins to define herself apart from her family’s situation and she refused to accept the disdain presented to her by some members of society or from her own family. One family member that shows the importance of the quote is Walls when she stood up to her grandmother, Erma when she questions Jeannette’s friendship with an African American classmate.

When Erma gets angry, Jeannette is surprised that her parents aren’t more supportive of her bravery in countering authority. Rex and Rose Mary are less concerned about Jeannette learning non-conformist practices as they are afraid that they will be kicked out of Erma’s home. As a result, they chastise their daughter for angering her grandmother. After this incident, Jeannette realizes that everyone can be forced to conform if the consequences of rebelling are severe enough. In life we as people are faced with challenges and adversities regardless of racial background, social status, or religious lifestyle. Some people are faced with more hardships than others, and how people deal with their issues can differ depending on the people they surround around them.so living in poverty and being homeless is not a choice, but people are forced to become homeless.

Do Not Judge People. (2021, Mar 23). Retrieved from https://papersowl.com/examples/do-not-judge-people/

Literature is Meant to Call for Emotions of People

Alcoholism Problems in the United States