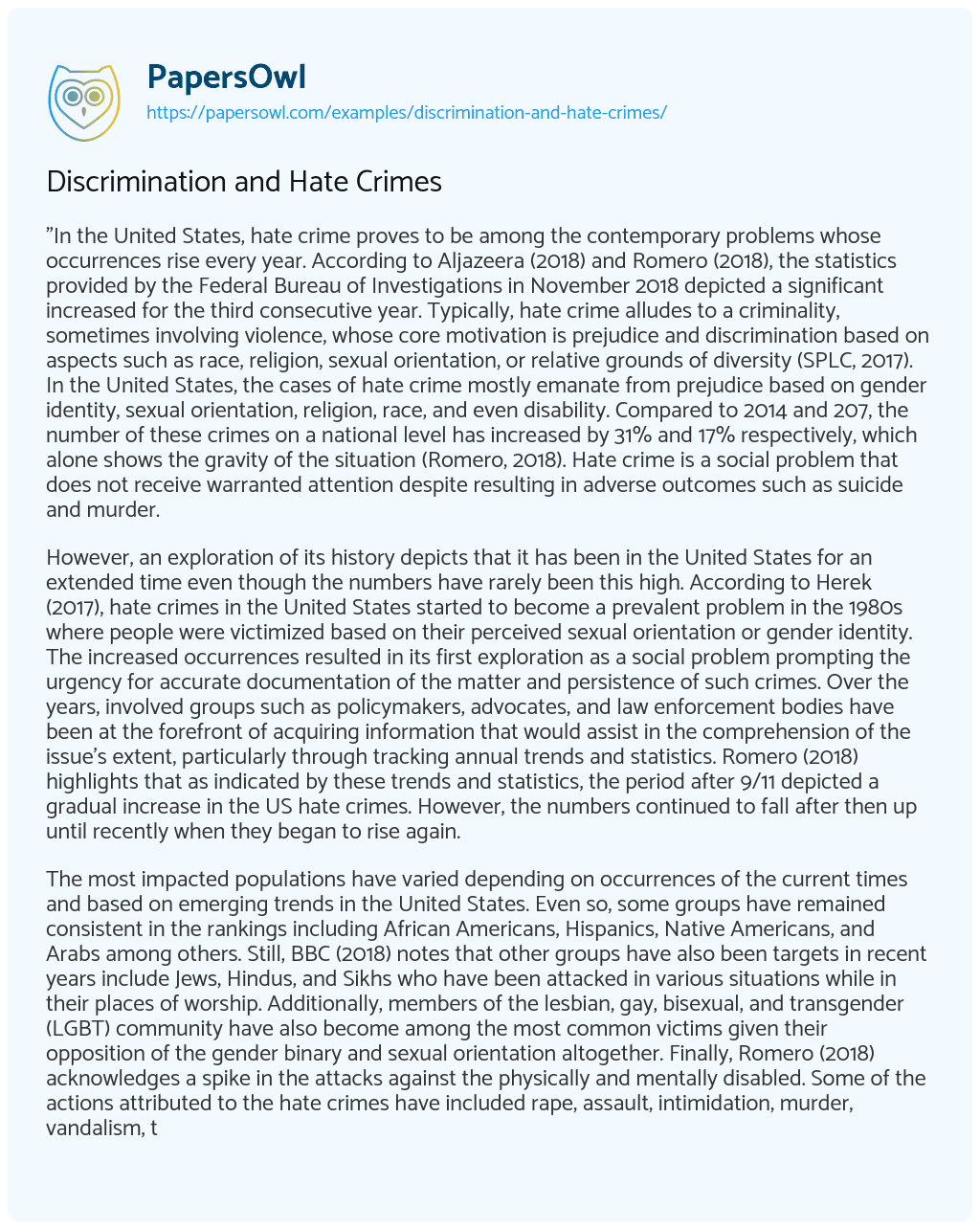 “In the United States, hate crime proves to be among the contemporary problems whose occurrences rise every year. According to Aljazeera (2018) and Romero (2018), the statistics provided by the Federal Bureau of Investigations in November 2018 depicted a significant increased for the third consecutive year. Typically, hate crime alludes to a criminality, sometimes involving violence, whose core motivation is prejudice and discrimination based on aspects such as race, religion, sexual orientation, or relative grounds of diversity (SPLC, 2017). In the United States, the cases of hate crime mostly emanate from prejudice based on gender identity, sexual orientation, religion, race, and even disability. Compared to 2014 and 207, the number of these crimes on a national level has increased by 31% and 17% respectively, which alone shows the gravity of the situation (Romero, 2018). Hate crime is a social problem that does not receive warranted attention despite resulting in adverse outcomes such as suicide and murder.

However, an exploration of its history depicts that it has been in the United States for an extended time even though the numbers have rarely been this high. According to Herek (2017), hate crimes in the United States started to become a prevalent problem in the 1980s where people were victimized based on their perceived sexual orientation or gender identity. The increased occurrences resulted in its first exploration as a social problem prompting the urgency for accurate documentation of the matter and persistence of such crimes. Over the years, involved groups such as policymakers, advocates, and law enforcement bodies have been at the forefront of acquiring information that would assist in the comprehension of the issue’s extent, particularly through tracking annual trends and statistics. Romero (2018) highlights that as indicated by these trends and statistics, the period after 9/11 depicted a gradual increase in the US hate crimes. However, the numbers continued to fall after then up until recently when they began to rise again.

The most impacted populations have varied depending on occurrences of the current times and based on emerging trends in the United States. Even so, some groups have remained consistent in the rankings including African Americans, Hispanics, Native Americans, and Arabs among others. Still, BBC (2018) notes that other groups have also been targets in recent years include Jews, Hindus, and Sikhs who have been attacked in various situations while in their places of worship. Additionally, members of the lesbian, gay, bisexual, and transgender (LGBT) community have also become among the most common victims given their opposition of the gender binary and sexual orientation altogether. Finally, Romero (2018) acknowledges a spike in the attacks against the physically and mentally disabled. Some of the actions attributed to the hate crimes have included rape, assault, intimidation, murder, vandalism, theft, and arson. More so, the FBI has highlighted 34 categories as the most affected by hate crime including ant-atheists, anti-transgender, anti-white, and anti-Buddhist as some of the recent additions (Romero, 2018). Resolutely, the prevalence of hate crime and the growing numbers depict the urgency of addressing the social problem, especially based on the deductions attributed to Robert Merton’s Strain theory and Barbara Perry’s structured action theory of ‘doing difference’. The proposed solution entails developing diverse coalitions with everyone including the victims, law enforcement bodies, and the media, among others.

Even though the term ‘hate crime’ alludes to a plethora of actions with somewhat comparable classifications, the motivations that lurk behind the different and disparate occurrences are not the same. In some of the past literature covering the subject, the motivation behind the hate crime was attributed to incomprehensive factors such as animosity and relative irrationalities (Walters, 2011). However, advanced studies over the years have helped in the discovery that hate crime emanates from a toxic amalgamation of emotions ranging from anger to indignation. Nonetheless, involved bodies such as the FBI have provided a myriad of causes that categorize the different motivations. First, the perpetrators of hate crime mostly engage in it as a way of seeking thrill. According to Burke (2017), most of the hate crimes are a product of an immature longing for excitement and drama. In his explanation, he incorporates an illustration of bored and young adults marauding through the street without much today. Such positions prompt them to create their own thrill and excitement in every way possible. More so, the need for excitement and drama coupled with substance abuse or alcohol consumption creates an illusion that attacks on vulnerable victims is justified since the society does not care about them and will applaud the crime (Hamad, 2017; Burke, 2017). Finally, since there is no substantial reasoning behind these attacks, they are conducted randomly. However, hate crime based on the subject cause is low and can be addressed easily.

Secondly, some of the perpetrators of hate crime do it as a defensive measure. Notably, for such people, using hate crime is the only effective measure to protect themselves or those they love. More so, unlike those people that seek thrill, such motivations are based on a specific target. In fact, the culprits have reasons behind their actions that they use when they feel threatened. According to Hamad (2017), such causes are triggered by certain events, for instance, when a black or Muslim family moves into a new neighborhood. Unfortunately, similar occurrences are enough to prompt these culprits who barely show any remorse. Thirdly, hate crimes are committed as a form of retaliation with the perpetrator looking to revenge as a reaction to personal slights. For instance, they could target a person from a certain race, ethnicity, or religious group based on a belief that they committed an initial crime even when they are not connected to it in any way (Herek, 2017; Hamad, 2017). However, there are cases where people from a similar race or religion attack each other. Finally, the fourth group of hate crime culprits views themselves as missionaries or crusaders for a specific racial or religious cause, among other reasons. Burke (2017) claims they are not only the deadliest but also rarest. They are focused on engaging in war against members of a certain group, which they do through shootings or even the deployment of explosive devices. Essentially, to them, the system is rigged and unfair against them; a notion they utilize in the justification of their actions.

Based on the identified causes, Robert Merton’s Strain theory and the Barbara Perry’s structured action theory of ‘doing difference’ can apply in why hate crime, motivated by prejudice, continue to permeate the United States. First, Merton argues that the deviant behavior attributed to hate crime is a result of a ‘dis-equilibrium’ emanating from the gap between the culturally prescribed goals and the ways and chances of attaining them in a legitimate way (Walters, 2011). According to his hypothesis, the social inequalities alluding to elements such as individual capacities, education, or even income make it hard for everyone to establish the goals and objectives set out by the society and its constructs. Therefore, the outcome is a strain that affects the persons with a desire of which they cannot simply accomplish (Walters, 2011). More so, due to the limited possibilities of realizing them in the right way, the response is based on illegitimate avenues such as violence as the basis for these people achieving what they want in and how they want to be perceived in the society.

On the other hand, Barbara Perry does not fully support the strain theory since it barely accounts for the different hate crimes, particularly the atrocious ones. According to her, a hate crime is a result of extreme discrimination that emanates from a culture of segregation, discrimination, and marginalization of people who have an aspect of diversity or difference in them (Walter, 2011). In the United State, the subject difference is utilized in the construction of traversing social hierarchies based on gender, race, sexuality, class, and religion, among others. Consequently, people who do not accept these differences live in fear of the other person encroaching upon their personal identity or that of their cultural group, which has specific norms and beliefs. Eventually, the fear results in the feelings of insecurity and helplessness, especially about a person’s place in the society or that of their group (Walter, 2011). The response to these mixed and negative feelings includes a transposition into animosity and violence as their ways of acquiring a sense of control over the people they view as a threat to society’s security.

The analysis of hate crime as a social problem shows that countering it requires a comprehensive resolution, that is, one that can apply in addressing the different classifications of causes while simultaneously proving efficient and compatible for the various groups affected in the United States. Decisively, the development of a diverse coalition can form a firm foundation for not only combating it but also acquiring more information to apply in the resolution processes (SPLC, 2017; Hamad, 2017). Different groups and organizations such as schools, churches, clubs, civic groups, law enforcement bodies, the media, and even policymakers, among others, should act as allies (SPLC, 2017). However, the first step should be creating increased awareness on the matter for everyone to understand the nature of hate crime as a prevalent issue in the United States.

In conclusion, using the diverse coalition approach, information and statistics will definitely create an appeal among the undecided groups and assist in the mutual sharing of the desire to stand against hate. The high numbers of people and bodies supporting the cause will help everyone to overcome personal fear and vulnerability in addition to reducing the workload and augmenting creativity and impact (Hamad, 2017). More so, the diverse coalition can easily counter and isolate organized hate groups while educating others (SPLC, 2017; Hamad, 2017). Essentially, such a solution is crucial as a bridge between neighborhoods and law enforcement creating a stronger bond based on the shared belief and determination of countering hate crime in the United States.”

Discrimination and Hate Crimes. (2021, May 27). Retrieved from https://papersowl.com/examples/discrimination-and-hate-crimes/