Did Color Females Get Enough Representation Throughout History? 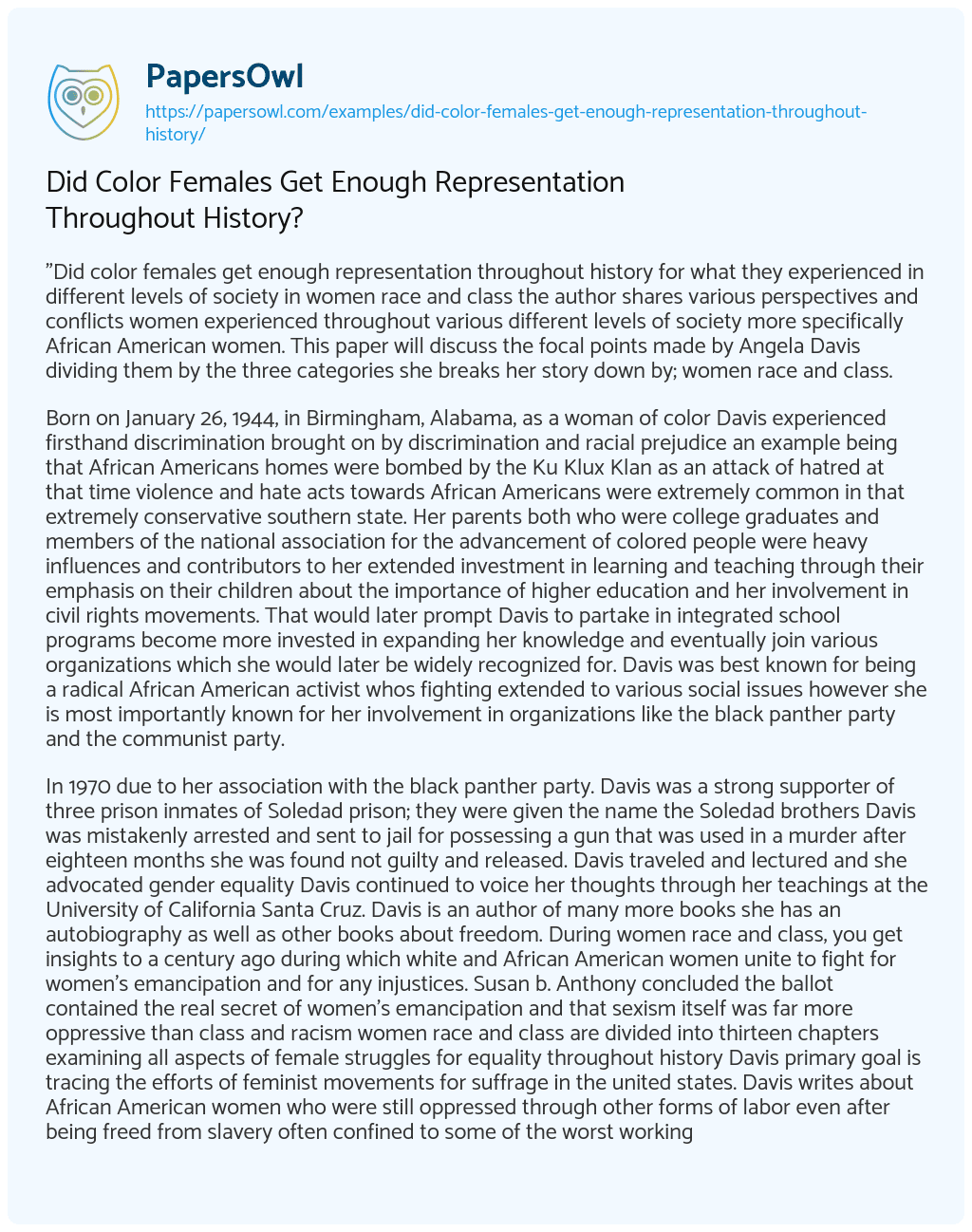 “Did color females get enough representation throughout history for what they experienced in different levels of society in women race and class the author shares various perspectives and conflicts women experienced throughout various different levels of society more specifically African American women. This paper will discuss the focal points made by Angela Davis dividing them by the three categories she breaks her story down by; women race and class.

Born on January 26, 1944, in Birmingham, Alabama, as a woman of color Davis experienced firsthand discrimination brought on by discrimination and racial prejudice an example being that African Americans homes were bombed by the Ku Klux Klan as an attack of hatred at that time violence and hate acts towards African Americans were extremely common in that extremely conservative southern state. Her parents both who were college graduates and members of the national association for the advancement of colored people were heavy influences and contributors to her extended investment in learning and teaching through their emphasis on their children about the importance of higher education and her involvement in civil rights movements. That would later prompt Davis to partake in integrated school programs become more invested in expanding her knowledge and eventually join various organizations which she would later be widely recognized for. Davis was best known for being a radical African American activist whos fighting extended to various social issues however she is most importantly known for her involvement in organizations like the black panther party and the communist party.

In 1970 due to her association with the black panther party. Davis was a strong supporter of three prison inmates of Soledad prison; they were given the name the Soledad brothers Davis was mistakenly arrested and sent to jail for possessing a gun that was used in a murder after eighteen months she was found not guilty and released. Davis traveled and lectured and she advocated gender equality Davis continued to voice her thoughts through her teachings at the University of California Santa Cruz. Davis is an author of many more books she has an autobiography as well as other books about freedom. During women race and class, you get insights to a century ago during which white and African American women unite to fight for women’s emancipation and for any injustices. Susan b. Anthony concluded the ballot contained the real secret of women’s emancipation and that sexism itself was far more oppressive than class and racism women race and class are divided into thirteen chapters examining all aspects of female struggles for equality throughout history Davis primary goal is tracing the efforts of feminist movements for suffrage in the united states. Davis writes about African American women who were still oppressed through other forms of labor even after being freed from slavery often confined to some of the worst working conditions domestic labor workers and often experienced violence from the male employers.

In many ways, Davis noticed the extensive absence of representation towards African American women had she took notice of that in many times African American men were just fighting for their rights forgetting to touch on African American women’s freedoms she also felt a lack of representation toward the white middle-class feminist movements and challenges brought by capitalism. Angela Davis wrote this book to inform about the hardships African American girls went through she wants to represent all the women that worked as hard as men outside in horrible weather many times African American women were called breeders and they were treated like cattle pregnant women did not receive a break from work they would have to keep working even after they had their kids they, however, did not get a break and would have to remain working, In many cases women did the same kind of labor and worked as hard as a man would they were in many cases raped and beaten and they still did not have any representation or anyone to stand up and speak up for them.

After years pass slaves are free she mentions many African American equal privileges activists and many of them are treated harshly for speaking up for their rights they receive threats and others are victims of lynchings. The message that Davis wants to convey is that if they were to have had more female equal rights activist speak-up they would have won the battle way earlier. This book relates to many topics from the textbook, for instance, the progressive era. Touching on what roles women’s organizations played in the progressive period it touches on new women which were a product of social and economic changes for them. Further touches on women’s suffrage one of the most massive movements of the progressive era women argued that they were entitled the similar rights as men for example the liberty to vote an additional thing that is both in the book women race and class and in the textbook is the NAWSA National American Women Association another example both in the book and in the textbook is African American and reform how progressive era produced significant challenges also both talk about the NAACP National Advancement Association For Colored People. the instructor more than likely selected this book because Angela Davis took action against racial conflicts when racism was seen all over the united states. She was also a very strong civil rights activist the instructor probably admires and values Angela Davis for not giving up after being put in in jail for a crime she did not commit Angela Davis kept fighting for the rights of both African American men and women the instructor more than likely like this piece because Angela Davis was an educated writer that as well endured many of these obstacles and she also focuses on various different conflicts in society.

Women race and class is an extraordinary book about women’s race and their classification all they went through during the woman’s suffrage written by Angela Davis this book is extremely interesting because it gives you examples of what black women and white women underwent she gives various quotes from black women as well as Caucasian women activist who fought against racism and sexism for the equal powers of them like Ida B. Wells and W.E.B du Bois. Davis notices that neither black men or white women understand what black females went through rape slavery racism violence, etc. all at once but Ida B. Wells and W.E.B Du Bois are some of the ones that speak up to make a change. There’s so much that this book talks about it also provides context of current events like feminism to this day Davis has really powerful ideas and thoughts she examined how the feminist movement had failed all women pleading for their rights she discusses topics like the anti-rape and how it excluded colored women capitalism and birth control/reproductive rights.

In conclusion, only a few will understand what black women really went through and only a few fought for their equal privileges Davis writes this book to make sure we all know that black females did not have enough representation from the women’s movement or black male activist.”

Did Color Females Get Enough Representation Throughout History?. (2021, Jul 03). Retrieved from https://papersowl.com/examples/did-color-females-get-enough-representation-throughout-history/

Essay about “Women, Race, and Class”

The Regressive Era for Everyone Else

During Decades, Females have been Victims of Sexism