Culture Plays a Huge Role on the Life 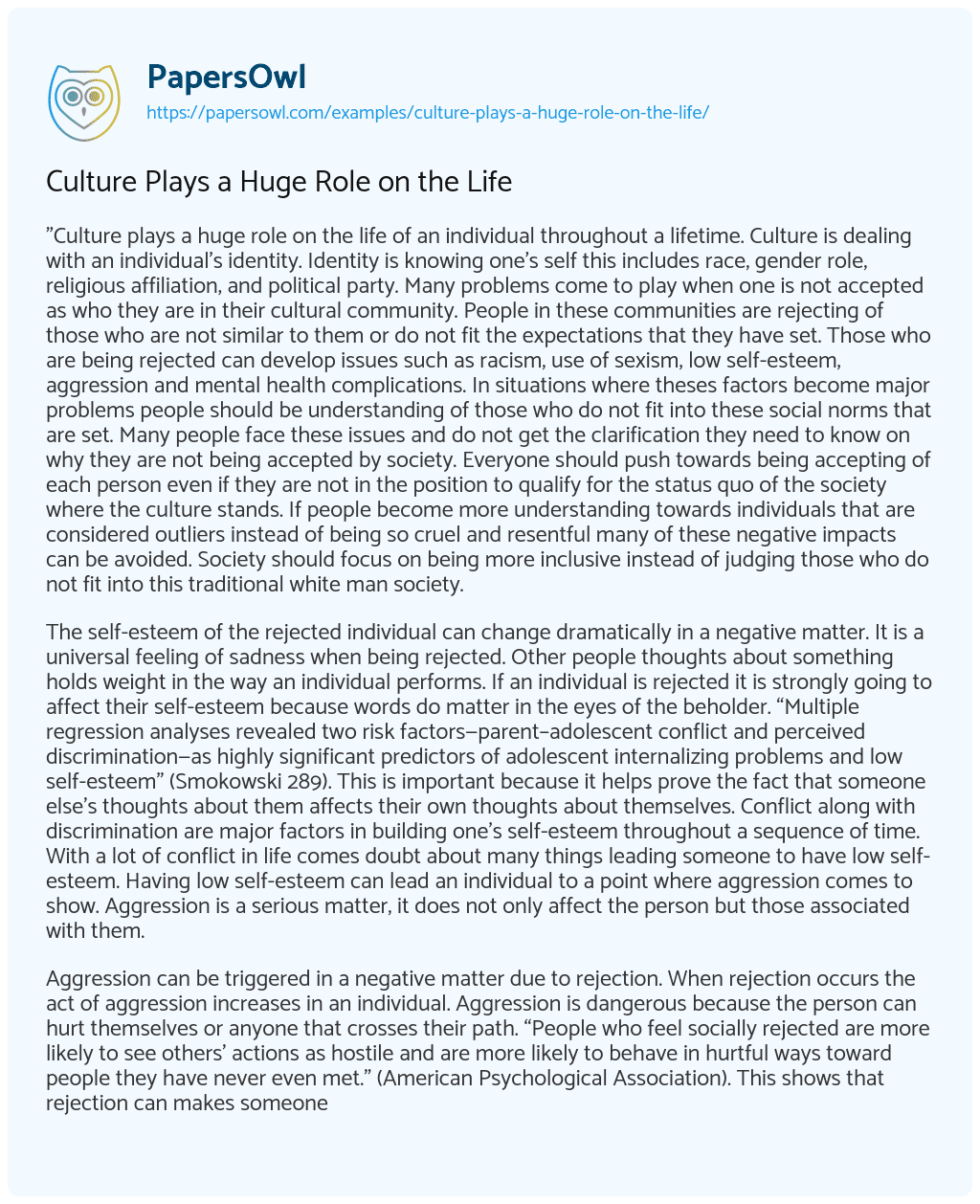 “Culture plays a huge role on the life of an individual throughout a lifetime. Culture is dealing with an individual’s identity. Identity is knowing one’s self this includes race, gender role, religious affiliation, and political party. Many problems come to play when one is not accepted as who they are in their cultural community. People in these communities are rejecting of those who are not similar to them or do not fit the expectations that they have set. Those who are being rejected can develop issues such as racism, use of sexism, low self-esteem, aggression and mental health complications. In situations where theses factors become major problems people should be understanding of those who do not fit into these social norms that are set. Many people face these issues and do not get the clarification they need to know on why they are not being accepted by society. Everyone should push towards being accepting of each person even if they are not in the position to qualify for the status quo of the society where the culture stands. If people become more understanding towards individuals that are considered outliers instead of being so cruel and resentful many of these negative impacts can be avoided. Society should focus on being more inclusive instead of judging those who do not fit into this traditional white man society.

The self-esteem of the rejected individual can change dramatically in a negative matter. It is a universal feeling of sadness when being rejected. Other people thoughts about something holds weight in the way an individual performs. If an individual is rejected it is strongly going to affect their self-esteem because words do matter in the eyes of the beholder. “Multiple regression analyses revealed two risk factors—parent–adolescent conflict and perceived discrimination—as highly significant predictors of adolescent internalizing problems and low self-esteem” (Smokowski 289). This is important because it helps prove the fact that someone else’s thoughts about them affects their own thoughts about themselves. Conflict along with discrimination are major factors in building one’s self-esteem throughout a sequence of time. With a lot of conflict in life comes doubt about many things leading someone to have low self-esteem. Having low self-esteem can lead an individual to a point where aggression comes to show. Aggression is a serious matter, it does not only affect the person but those associated with them.

Aggression can be triggered in a negative matter due to rejection. When rejection occurs the act of aggression increases in an individual. Aggression is dangerous because the person can hurt themselves or anyone that crosses their path. “People who feel socially rejected are more likely to see others’ actions as hostile and are more likely to behave in hurtful ways toward people they have never even met.” (American Psychological Association). This shows that rejection can makes someone feel disrespected or disliked. “We found a robust relationship between low self-esteem and externalizing problems” (Donnellan 333). Tying back aggression to self-esteem Donnellan aides the understanding that low self-esteem due to rejection can affect the behavior of aggression. This can change the thoughts about those are the individual that is being rejected. Aggression can lead an individual to do or say things that they will later regret.

With a drastic change such as cultural discrimination this can cause greater altercations such as racism. The people in this world tend to attach the actions of one person to an entire group of people that look like them. Saying that the way they look or tend to act does not fulfill this image that the rest of the world tends to have. These actions can lead to the act of racism. Racism can be defined in many ways. In this case it will be define as having negative views about a race, group, or nationality. This is very similar to rejection of an individual but here the rejection is being expanded from one individual to a whole group that connect to each other. Specifically speaking about implicit racism, Banks says, “A key feature of implicit attitudes is that they come from past experiences, which are mainly forgotten” (643). We see then that this problem is not always something people have a reason they are doing it. “Not surprisingly, both acculturative stress and racism-related stress were positively related to mental health difficulties,” (Miller 9). If they had an experience in the past that made them feel negatively toward a group, like being rejected by that group, then they might become racist toward that group of people without knowing why. The state in which an individual’s mental health is can affect their ability to be accepted by these people who are judging them because they do not fit into this perfect white world being unable to conform then, their mental health can be damaged. Acceptance plays a huge role for molding the mental well-being of a person.

Also, sexism can come to play in cultural discrimination. It takes place throughout industries and cultures. Sexism is stereotypical attitudes and belittles a person based on their sex. In this case we are going to put the attention towards women. Men are put on a pedestal by society making them the superior sex. Society gives women limits of what they can and can not day or do while, men are free to live the life they want to. For example, as a woman it is expected for them to be polite and keep a smile on their faces, while men can show anger and frustration because it protects their masculinity. Double standards due to Sexism are used against women all the time it occurs in government, in a work place, even on institutional levels. Between the two sex the women are held to a lower standard than men. Women are rejected for major positions in government or at a workplace because they tend to be too emotional. Society tends to lean towards male candidates with the same qualifications as women because they fit the image of this traditional white male society. Discriminatory behaviors such as these can have a negative impact on people and the culture of an institution.

As stated above, rejection would harm an individual’s mental well-being. Smowkowski says, “parent-adolescent conflict was the dominant risk factor identified for internalizing problems” (289). This shows that the influence of people plays a large role in a person’s mental health. Parent/adolescent conflict surely stems from one of the parties rejecting something the other party believes or feels, therefore this is a way that rejection affects a person’s mental health. If their mental health is harmed the individual might also be afraid to receive treatment for their problems. A person afraid to get treatment for their mental illness their mental health will only deteriorate. A person’s mental health is a large part of their overall well-being, which is why being rejected from a society or by a person can have such damaging effects on that individual. The effect of rejection or acceptance on an individual’s overall wellbeing is very large and should be considered carefully when interacting with others.

All of this is important because each individual person can be affected very strongly by how the people around them interact with them. If they are rejected then they can see themselves as wrong or bad, leading them toward bad habits and decisions that can put them or others around them in danger. Some negative things such as low self-esteem, poor mental health, not seeking out treatment for mental illnesses, and excessive aggression are important factors to take in to account when considering how to interact with a person. This not only affects the individual person but also the people around them. Negative feelings have a way of bringing everyone down and creating a cycle of negativity that is hard to break. Before rejecting a person think about what the person might feel and think when you do that. Rejection hurts and can also be easily spread in ways like racism so it should be avoided at all costs. Societies and individuals should strive to create more inclusion and acceptance to all people even if they are not like them.

Some may argue that society should not be accepting of those of other cultures because as our president may argue “This country does not want them.” These people from these cultures are not beneficial or are considered criminals and dangerous. Cultural diversity comes with difficulties such as the barriers with language because of social segregation, civic disengagement because the individual is less likely to become politically involved. and tension in society due to the differences between cultures. But the different cultures that stand in the U.S. are more productive than the white society the world tends to praise. Cultural diversity is beneficial the U.S because they can drive innovation, inspire creativity, create competition, and bring opportunity for growth personally and professionally. Culture shapes an individual’s identity and influences behaviors. An individual can overcome language barriers by learning new languages, they can become politically involved as they want it is not something that many want to affiliate with nor is it something that is mandatory, and with the differences between cultures one begins to be open minded, learn and not judge.

The “American Dream” a phrase that society praises until it is someone that does not fit into its standards hinges on the idea that anyone can remove themselves from a difficult situation or circumstance through hard work combined with a willingness to succeed because they want to be accepted. This country is based on the foundation of different cultures migrating together to make something better than what it was. The society we live in is a cruel one if you do not fit its expectation. We live in a world that will chew you up and spit you out. This notion that everyone is created equal is not true. We should be able to be accepting of other cultures and respect the existence of others. Cultural diversity is the main factor behind the idea of how society gets the grow. Society is bombarded with a vast amount of potential from all over and focusing on one and making it the primary way to act is not the right path to walk on. Appreciate, accept, and be willing to learn from these different cultures.”

Culture Plays a Huge Role on the Life. (2021, Jul 05). Retrieved from https://papersowl.com/examples/culture-plays-a-huge-role-on-the-life/

Racism and Mental Illness in America