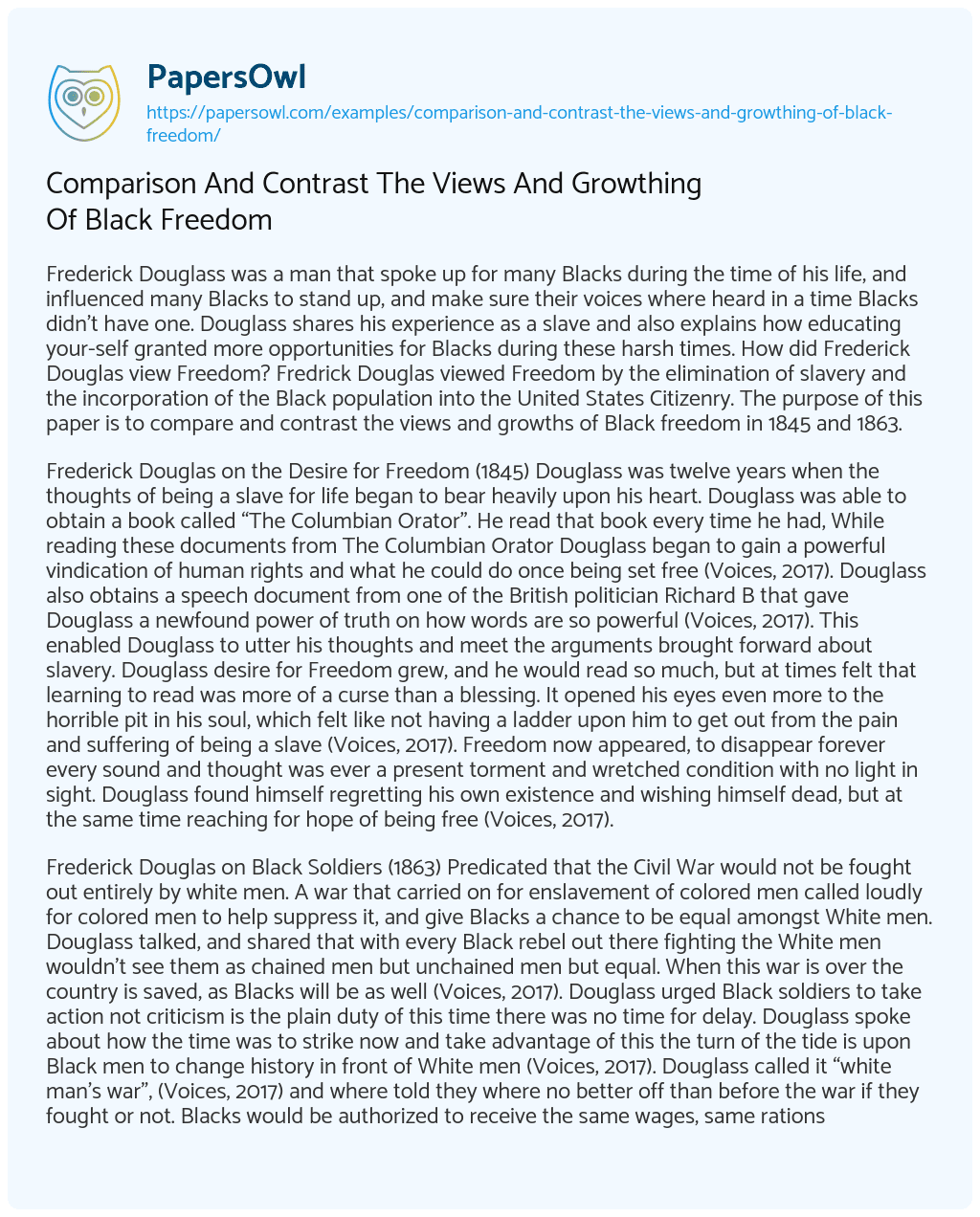 Frederick Douglass was a man that spoke up for many Blacks during the time of his life, and influenced many Blacks to stand up, and make sure their voices where heard in a time Blacks didn’t have one. Douglass shares his experience as a slave and also explains how educating your-self granted more opportunities for Blacks during these harsh times. How did Frederick Douglas view Freedom? Fredrick Douglas viewed Freedom by the elimination of slavery and the incorporation of the Black population into the United States Citizenry. The purpose of this paper is to compare and contrast the views and growths of Black freedom in 1845 and 1863.

Frederick Douglas on the Desire for Freedom (1845) Douglass was twelve years when the thoughts of being a slave for life began to bear heavily upon his heart. Douglass was able to obtain a book called “The Columbian Orator”. He read that book every time he had, While reading these documents from The Columbian Orator Douglass began to gain a powerful vindication of human rights and what he could do once being set free (Voices, 2017). Douglass also obtains a speech document from one of the British politician Richard B that gave Douglass a newfound power of truth on how words are so powerful (Voices, 2017). This enabled Douglass to utter his thoughts and meet the arguments brought forward about slavery. Douglass desire for Freedom grew, and he would read so much, but at times felt that learning to read was more of a curse than a blessing. It opened his eyes even more to the horrible pit in his soul, which felt like not having a ladder upon him to get out from the pain and suffering of being a slave (Voices, 2017). Freedom now appeared, to disappear forever every sound and thought was ever a present torment and wretched condition with no light in sight. Douglass found himself regretting his own existence and wishing himself dead, but at the same time reaching for hope of being free (Voices, 2017).

Frederick Douglas on Black Soldiers (1863) Predicated that the Civil War would not be fought out entirely by white men. A war that carried on for enslavement of colored men called loudly for colored men to help suppress it, and give Blacks a chance to be equal amongst White men. Douglass talked, and shared that with every Black rebel out there fighting the White men wouldn’t see them as chained men but unchained men but equal. When this war is over the country is saved, as Blacks will be as well (Voices, 2017). Douglass urged Black soldiers to take action not criticism is the plain duty of this time there was no time for delay. Douglass spoke about how the time was to strike now and take advantage of this the turn of the tide is upon Black men to change history in front of White men (Voices, 2017). Douglass called it “white man’s war”, (Voices, 2017) and where told they where no better off than before the war if they fought or not. Blacks would be authorized to receive the same wages, same rations of food and protection as White soldiers (Voices, 2017).

Fredrick Douglas viewed Freedom by the elimination of slavery and the incorporation of the Black population into the United States Citizenry. The Black population had no urgency of fighting for hope or freedom during this time, and with so many Blacks being uneducated who would be a voice in such a dark time. Douglass and many Slaves abandoned their desire for freedom and being chained down by the White man. Douglass began to educate himself, and build his voice through reading, and writing at the age of twelve years old. He began to want a change, and see the light of freedom, but at the same time let fear creep back in because of the dominance White men had over Black lives at the time. As time moved on so did the voice of the Black People it began to grow through Douglass and now we see Black people standing up and forms of resistance began to widespread, and the expression slaves showed was through day-to-day resistance or silent sabotage doing poor work, breaking tools and abusing animals (Liberty, 2017) One big uproar in the fight against Slavery where Underground Railroad organization was created to abolitionists who hid fugitives in their homes and sent to next station. Harriet Tubman was the leader and creator who led numerous trips of slaves to freedom with the help of other White groups and individuals as war being to come between the North and South (Liberty, 2017).

Frederick Douglas saw the Civil War as a chance for blacks to gain liberation experience and gain incorporation into United States Citizenry. Black men during this time began to take part in the same actions as White men, and find equality because they weren’t just fighting for their freedom, but freedom for everyone in the United States on the north side. President Abraham Lincoln told everyone in the army that Blacks and Whites where going to receive equal pay and live and dine together in the same quarters also received promotion opportunities (Liberty, 2017). Black found their liberty, and peace of being equal amongst White men by giving up their lives and having a common belief in the same Constitution as White men it was the first signs of what a brotherhood would look like upon the United States for years to come (Liberty, 2017).

In conclusion the elimination of slavery and incorporation of Black population into the United States Citizenry was a long haul to come to. It was a foundation that builds upon what Frederick Douglass displayed with gaining an education even though having so much doubt of being a slave forever. He never stop believing in being free. The spirit for Blacks to join a war led by White men, but with the true meaning of abolishing Slavery with a victory. Also gaining the respect and equality from White men by displaying the same actions, and belief in the Constitution. Blacks now had a brotherhood with White men because they all followed the same laws, fought in the same war as they did. During this end they where able to earn the same wages, jobs and gain an education. Most importantly felt the air of freedom and liberty for the first time in their lives.

Comparison And Contrast The Views And Growthing Of Black Freedom. (2022, Feb 09). Retrieved from https://papersowl.com/examples/comparison-and-contrast-the-views-and-growthing-of-black-freedom/