Character Analysis of Alex in a Clockwork Orange, a Novel by Anthony Burgess 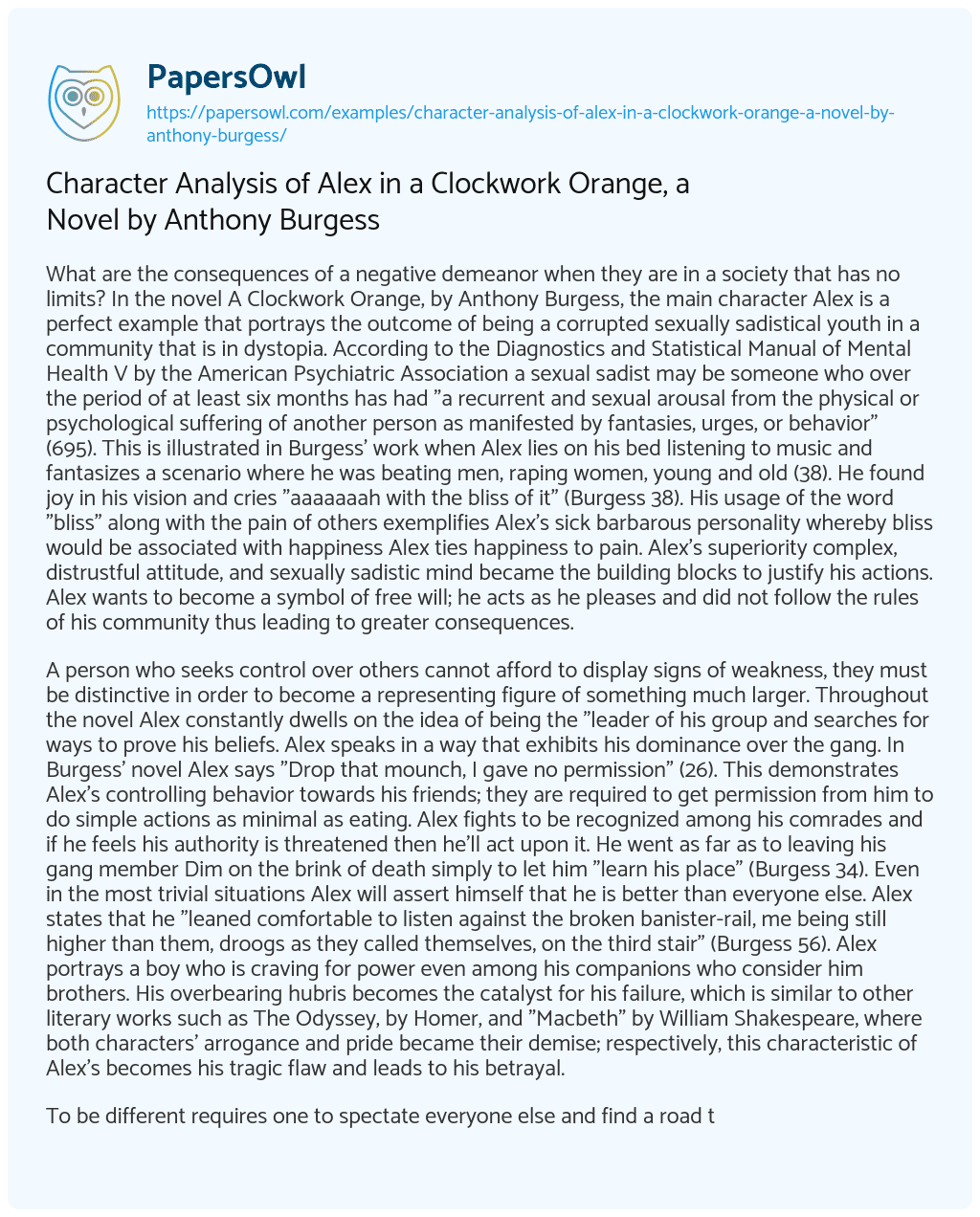 What are the consequences of a negative demeanor when they are in a society that has no limits? In the novel A Clockwork Orange, by Anthony Burgess, the main character Alex is a perfect example that portrays the outcome of being a corrupted sexually sadistical youth in a community that is in dystopia. According to the Diagnostics and Statistical Manual of Mental Health V by the American Psychiatric Association a sexual sadist may be someone who over the period of at least six months has had “a recurrent and sexual arousal from the physical or psychological suffering of another person as manifested by fantasies, urges, or behavior” (695). This is illustrated in Burgess’ work when Alex lies on his bed listening to music and fantasizes a scenario where he was beating men, raping women, young and old (38). He found joy in his vision and cries “aaaaaaah with the bliss of it” (Burgess 38). His usage of the word “bliss” along with the pain of others exemplifies Alex’s sick barbarous personality whereby bliss would be associated with happiness Alex ties happiness to pain. Alex’s superiority complex, distrustful attitude, and sexually sadistic mind became the building blocks to justify his actions. Alex wants to become a symbol of free will; he acts as he pleases and did not follow the rules of his community thus leading to greater consequences.

A person who seeks control over others cannot afford to display signs of weakness, they must be distinctive in order to become a representing figure of something much larger. Throughout the novel Alex constantly dwells on the idea of being the “leader of his group and searches for ways to prove his beliefs. Alex speaks in a way that exhibits his dominance over the gang. In Burgess’ novel Alex says “Drop that mounch, I gave no permission” (26). This demonstrates Alex’s controlling behavior towards his friends; they are required to get permission from him to do simple actions as minimal as eating. Alex fights to be recognized among his comrades and if he feels his authority is threatened then he’ll act upon it. He went as far as to leaving his gang member Dim on the brink of death simply to let him “learn his place” (Burgess 34). Even in the most trivial situations Alex will assert himself that he is better than everyone else. Alex states that he “leaned comfortable to listen against the broken banister-rail, me being still higher than them, droogs as they called themselves, on the third stair” (Burgess 56). Alex portrays a boy who is craving for power even among his companions who consider him brothers. His overbearing hubris becomes the catalyst for his failure, which is similar to other literary works such as The Odyssey, by Homer, and “Macbeth” by William Shakespeare, where both characters’ arrogance and pride became their demise; respectively, this characteristic of Alex’s becomes his tragic flaw and leads to his betrayal.

To be different requires one to spectate everyone else and find a road that runs off the standard path. As a distrustful teen Alex is driven to lead a miserable life filled with suspicion because he is continuously judging the people around him in hopes to become different from them, to become unique in a certain way. He is two-faced; he masks his real emotions to never reveals a sign of weakness in front of his gang. In A Clockwork Orange, Alex proclaims “I could feel myself getting all razdraz inside, but I tried to cover it” and he “got more razdraz, calmer out” (Burgess 34). He believes that if his anger leaks out, then his friends would be under the impression that he was immature and not capable of being what he consider their leader. Rather than displaying his true emotion Alex covers them up. When Alex’s concerned friends visit him, he questions them by asking “Perhaps you have been having a bit of a quiet govoreet behind my back, making your own little jokes and such-like” (Burgess 55). Alex continually has suspicion over his friends because it is part of his nature to doubt even his group of friends.

Alex “played with care, with great care, the greatest, saying, smiling: ‘Good’ (Burgess 57) as he spoke to his psychopath according to Burgemeester’s article, “The Sadistic Narcissist” which states that such a person “uses torture and abuse, but he does so as a means of punishment for perceived slights and, thus, reasserting his sense of superiority.” An example of this is seen when Alex plans to rape two young girls and says that they “had to submit to the strange and weird desires of Alexander the Large” (Burgess 51). Alex refers himself as “the Large” which contributes to his narcissistic behavior in which he regards himself as noteworthy individual. Despite the fact that Alex may be considered a psychopath it proven that many psychopaths tend to be “rational, often highly intelligent people” and are “thrill seekers, literally fearless” (Scott). It is shown in A Clockwork Orange that Alex is rather a profound teenager who introduces meaningful questions such as they don’t go into what is the cause of goodness, so why of the other shop? (44)” Alex makes a strong points through the use of logos, but simply proves them in the wrong method. He says the government, judges, and schools “cannot allow the bad because they cannot allow the self” but “what I do I do because I like to (Burgess 45).” Alex poses a wise fact by criticizing the government which expects only the good out of people. His acts of violence are the ways to prove his reasoning and to display self pleasure and independence; Alex epitomizes freedom but hypocritically, violates the rights of others. The true question that Alex brings to light asks “Is it better for a man to have chosen evil than to have good imposed upon him? (Burgess 106)”

Character Analysis of Alex in a Clockwork Orange, a Novel by Anthony Burgess. (2022, Nov 14). Retrieved from https://papersowl.com/examples/character-analysis-of-alex-in-a-clockwork-orange-a-novel-by-anthony-burgess/

The Need of Evil in Human Nature in a Clockwork Orange, a Novel by Anthony Burgess

The Unalienable Right of Free Will in a Clockwork Orange, a Novel by Anthony Burgess

The Theme of Oppression in a Clockwork Orange, a Novel by Anthony Burgess

Understanding the Youth in a Clockwork Orange, a Novel by Anthony Burgess