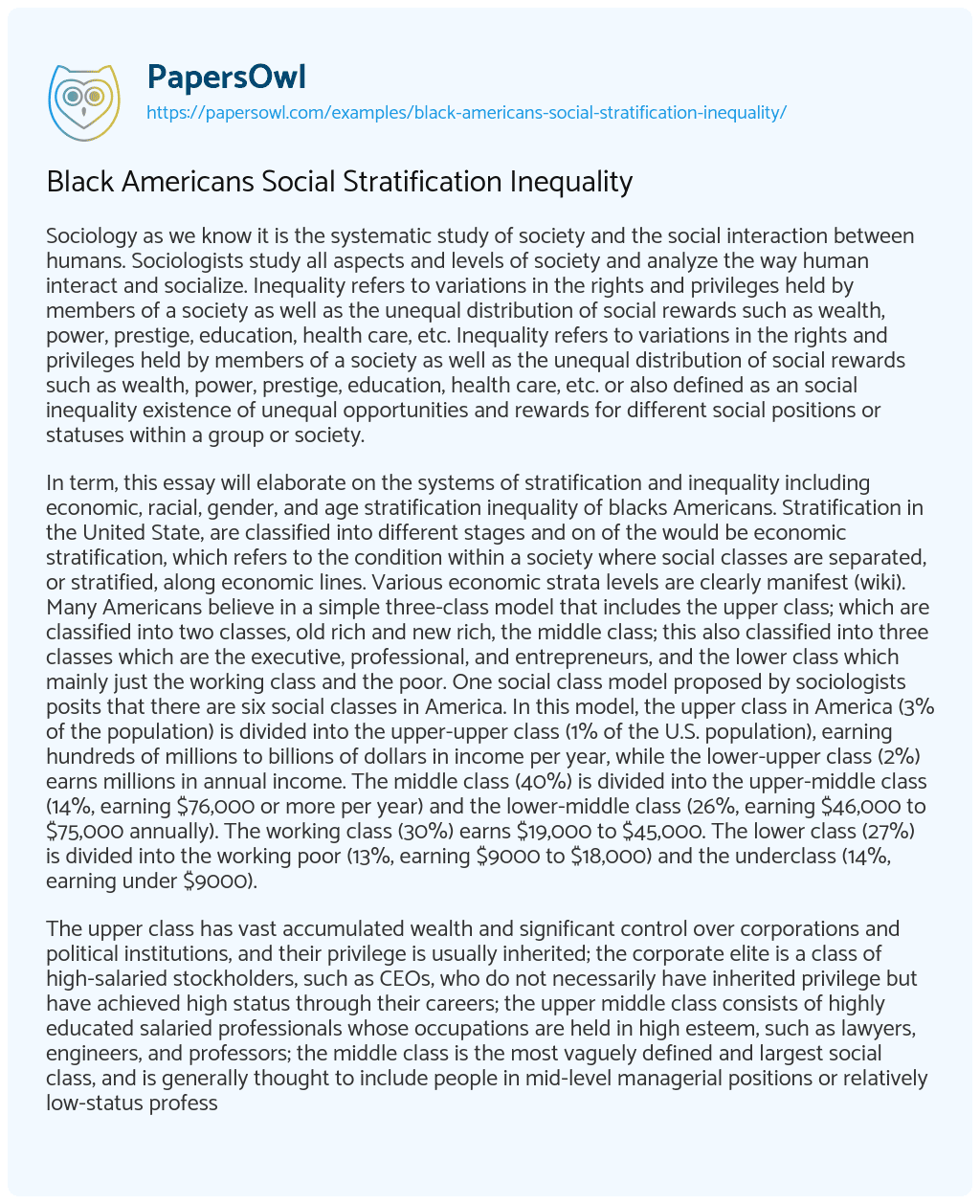 In term, this essay will elaborate on the systems of stratification and inequality including economic, racial, gender, and age stratification inequality of blacks Americans. Stratification in the United State, are classified into different stages and on of the would be economic stratification, which refers to the condition within a society where social classes are separated, or stratified, along economic lines. Various economic strata levels are clearly manifest (wiki). Many Americans believe in a simple three-class model that includes the upper class; which are classified into two classes, old rich and new rich, the middle class; this also classified into three classes which are the executive, professional, and entrepreneurs, and the lower class which mainly just the working class and the poor. One social class model proposed by sociologists posits that there are six social classes in America. In this model, the upper class in America (3% of the population) is divided into the upper-upper class (1% of the U.S. population), earning hundreds of millions to billions of dollars in income per year, while the lower-upper class (2%) earns millions in annual income. The middle class (40%) is divided into the upper-middle class (14%, earning $76,000 or more per year) and the lower-middle class (26%, earning $46,000 to $75,000 annually). The working class (30%) earns $19,000 to $45,000. The lower class (27%) is divided into the working poor (13%, earning $9000 to $18,000) and the underclass (14%, earning under $9000).

The upper class has vast accumulated wealth and significant control over corporations and political institutions, and their privilege is usually inherited; the corporate elite is a class of high-salaried stockholders, such as CEOs, who do not necessarily have inherited privilege but have achieved high status through their careers; the upper middle class consists of highly educated salaried professionals whose occupations are held in high esteem, such as lawyers, engineers, and professors; the middle class is the most vaguely defined and largest social class, and is generally thought to include people in mid-level managerial positions or relatively low-status professional positions, such as high school teachers and small business owners; the working class generally refers to those without college degrees who do unskilled service work, such as being a sales clerk or housecleaner, and it includes most people whose incomes fall below the poverty line( “Boundless Sociology.”). But what makes it different is that black American and other race has o the lowest rate in the social classes In 1989 the median net worth of Black families was $8,020 which was a far cry from Whites who had a median net worth of $134,680. By 2001 the median net worth for African American families climbed to $26,150 as the White median net worth soared to $198,620 by 2004. However due to the “Great Recession” by 2013 the Black median net worth dropped to $13,490 which was lower than it was in 1992 and anytime since. The White median net worth also dropped but only to $146,320 making the Black/white gap even wider than it was in the 80s or the 90s and the income chart below proves it (BlackDemographics.com).

Above is the economic and income association with the comparizing of black Americans. Another example of economic stratification is the education, occupation, and wealth. Stratification in the education system: Access to education and to educational attainments is a function of social class, economic status, gender, disability, personal preferences, education ‘quality’, teachers, pedagogy, peer relations, etc. schools will attract wealthier students and better teachers. Since the Bureau of Labor Statistics began reporting the black unemployment rate in 1972, it has almost always been about twice the white unemployment rate—in good economic times and in bad, as well as at every level of education.

Although the wage gap between black and white workers narrowed during the latter part of the 1960s through the 1970s due to the passage of important civil rights legislation, it has gotten larger since 1979. This is true even among those with the same levels of education and experience and living in the same region of the country. In fact, despite the educational gains of African Americans, black workers were further from parity with white workers in 2017 than in 1979 at every level of education except the small group of workers who did not complete high school. The expansion of the black-white wage gap can be attributed to three trends: 1) limited wage growth among middle- and low-wage workers (where African Americans are overrepresented) 2) above average growth among the highest wage workers (where African Americans are underrepresented), and 3) growing racial inequality in hiring, pay, and opportunities for promotion.

Gender inequality acknowledges that men and women are not equal and that gender affects an individual’s lived experience. These differences arise from distinctions in biology, psychology, and cultural norms. Some of these distinctions are empirically grounded while others appear to be socially constructed (wiki). These is very common around the world especially done to women For example, consider the obvious biological fact that women bear and nurse children and men do not. Couple this with the common view that women are also more gentle and nurturing than men, and we end up with a “biological recipe” for women to be the primary caretakers of children. Many people think this means women are therefore much better suited than men to take care of children once they are born, and that the family might be harmed if mothers work outside the home or if fathers are the primary caretakers. In other words society of men belief that women should stay at home and pie chart below elaborate the percentage of agreement and disagreement involved with if a man is the provider of the home and the women takes care of the family.

Lastly, the age stratification which is based on an ascribed status is a major source inequality, and thus may lead to ageism. The resources are unevenly distributed to the elderly because they are sometimes looked down upon and treated unfairly. Age is a major component of entry and exit for many parts of life – school, starting a family, retirement, etc and In the United States, discrimination on the basis of one’s age is prohibited in the workplace by the Age Discrimination in Employment Act of 1967. Enforced by the Equal Employment Opportunity Commission, the act is meant to keep employers unbiased in regards to age when dealing with hiring, promotions, terms, etc. The law also makes it illegal for employees to be harassed due to their age. Emergence of new occupations can lead to a polarization of age cohorts by workforce. As a result, a quick shift of the occupational distribution increases occupational age discrimination.

In conclusion, this paper especially explain the stacification in the society like the inequality including economic, racial, gender, and age stratification inequality. But also how it affected black americans, some of the analysis chart shows the explanation given in class like for example Marx’s and Weber’s notions of class and also the inequality stratification done in the united state.