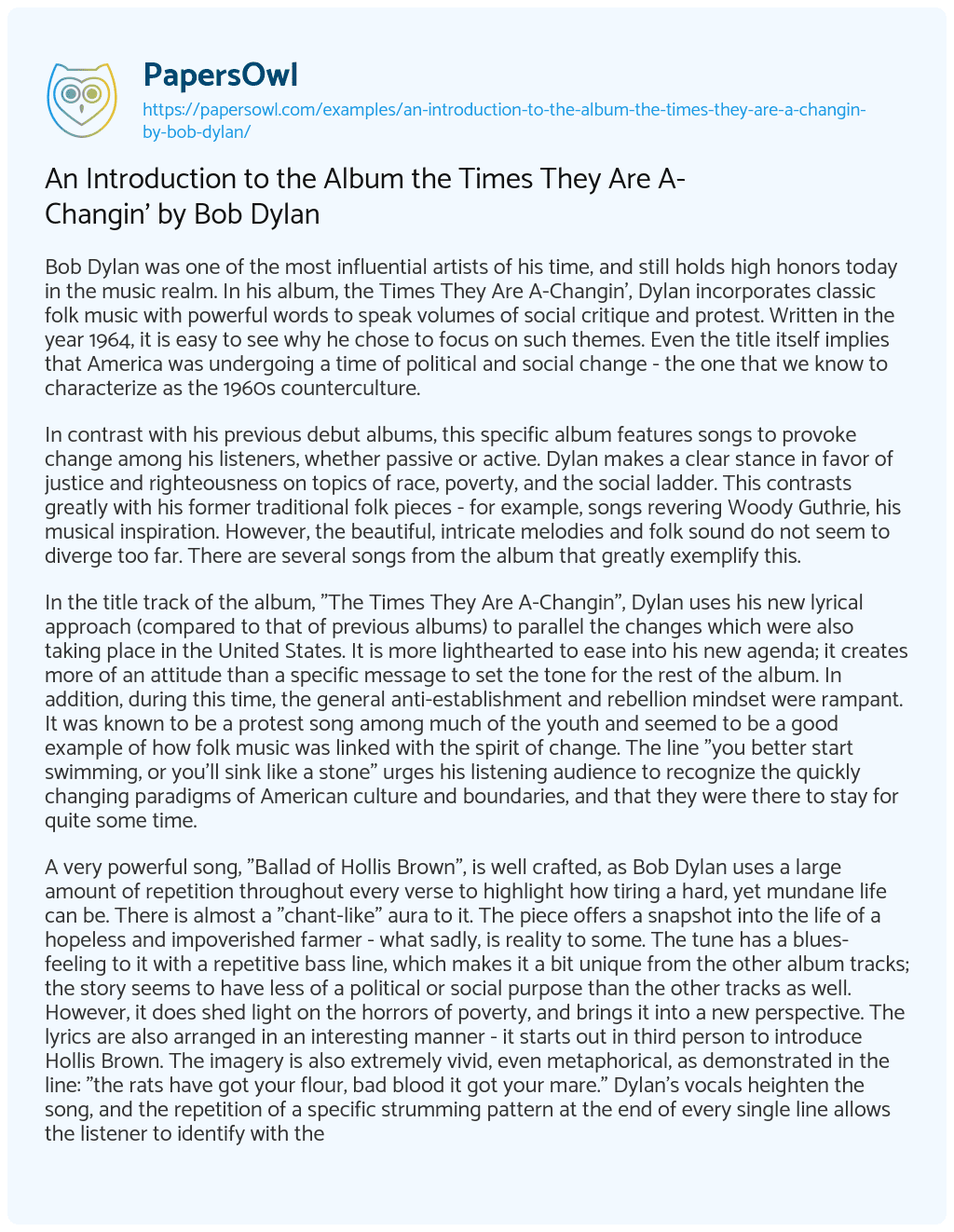 Bob Dylan was one of the most influential artists of his time, and still holds high honors today in the music realm. In his album, the Times They Are A-Changin’, Dylan incorporates classic folk music with powerful words to speak volumes of social critique and protest. Written in the year 1964, it is easy to see why he chose to focus on such themes. Even the title itself implies that America was undergoing a time of political and social change – the one that we know to characterize as the 1960s counterculture.

In contrast with his previous debut albums, this specific album features songs to provoke change among his listeners, whether passive or active. Dylan makes a clear stance in favor of justice and righteousness on topics of race, poverty, and the social ladder. This contrasts greatly with his former traditional folk pieces – for example, songs revering Woody Guthrie, his musical inspiration. However, the beautiful, intricate melodies and folk sound do not seem to diverge too far. There are several songs from the album that greatly exemplify this.

In the title track of the album, “The Times They Are A-Changin”, Dylan uses his new lyrical approach (compared to that of previous albums) to parallel the changes which were also taking place in the United States. It is more lighthearted to ease into his new agenda; it creates more of an attitude than a specific message to set the tone for the rest of the album. In addition, during this time, the general anti-establishment and rebellion mindset were rampant. It was known to be a protest song among much of the youth and seemed to be a good example of how folk music was linked with the spirit of change. The line “you better start swimming, or you’ll sink like a stone” urges his listening audience to recognize the quickly changing paradigms of American culture and boundaries, and that they were there to stay for quite some time.

A very powerful song, “Ballad of Hollis Brown”, is well crafted, as Bob Dylan uses a large amount of repetition throughout every verse to highlight how tiring a hard, yet mundane life can be. There is almost a “chant-like” aura to it. The piece offers a snapshot into the life of a hopeless and impoverished farmer – what sadly, is reality to some. The tune has a blues-feeling to it with a repetitive bass line, which makes it a bit unique from the other album tracks; the story seems to have less of a political or social purpose than the other tracks as well. However, it does shed light on the horrors of poverty, and brings it into a new perspective. The lyrics are also arranged in an interesting manner – it starts out in third person to introduce Hollis Brown. The imagery is also extremely vivid, even metaphorical, as demonstrated in the line: “the rats have got your flour, bad blood it got your mare.” Dylan’s vocals heighten the song, and the repetition of a specific strumming pattern at the end of every single line allows the listener to identify with the unsolvable dilemma that Hollis Brown faces. By the second verse, Dylan addresses Hollis Brown in second person, also adding to the suspense. Hollis Brown shoots himself and his family which heightens the eerie, melancholic mood of the piece. The final line, “Somewhere in the distance, there’s seven new people born” is very striking; it can either be interpreted as new beginnings or that other people may be stuck in the same misery as this fictional Hollis Brown character.

A politically charged song, “With God On Our Side” has a particularly interesting messageit is that humans typically believe that they are on the “favored” side of fate, or God’s hand. Overall, the song critiques war and highlights well-known wars throughout history; what does humanity have to show for the bloodshed and loss? Dylan does so in a very clever manner, by speaking in first person and using irony for much of the piece; he acts as an ignorant, uneducated supporter of war. This is demonstrated in the line “I’ve learned to hate Russians all through my whole life; if another war starts, it’s them we must fight.” He probes with the question of why we invest so much time and energy to show superiority, and to show that God is “truly on our side”. The oozing patriotism (which has incorrect motives) is criticized deeply. Ultimately, the song does not end without being applicable to Bob Dylan’s time and a piercing statement to the 1960s listener. The last verse clearly points voices Dylan’s stance on the Vietnam War as he asks, “Can somebody tell me what we’re fighting for?”

In another song which screams for social change, “Only A Pawn in Their Game”, he implies that the assassination of Meadger Evers, early civil rights leader, was not merely the assassinator’s fault. A large community was responsible for this – the wealthy whites had redirected the sufferings of the impoverished whites by persuading them to view blacks as the true underdogs of the American society. The poor whites look to the blacks as a “scapegoat” for the troubles. His hushed tone and troubled, tense voice calls for attention on the severity of this issue. He directly addresses how politicians can be subject to corruption and evil tactics to increase their fame and power, and how manipulation can result from something as simple as race. As he tells the story of Medger Evers, he initially has a medium paced tempo, but later increases it to build suspense. The strumming pattern also begins to vary when Dylan wants to emphasize a specific phrase, which is very powerful. The bridge is also striking as it depicts the burial very metaphorically.

“Boots of Spanish Leather” features a soothing ballad, and it is easy to see how this would have been appealing to the fans of his classic works. The lyrics are freer formed, as if Dylan is describing his own story or experience which has had an impact on him. Dylan’s use of dialogue and first person to tell a story makes it more personal and reaches out to the listener on a deeper level. It revolves around a story of romance and emotions towards his loved one. Dylan passionately depicts ones thoughts when in a long distance relationship and elaborates on the empty feeling and longing for a lover’s presence. He does so through beautiful metaphors and imagery to paint his love, such as the line “If I had… the diamonds from the deepest ocean, I’d forsake them all for your sweet kiss.” His use of fingerpicking on the guitar also adds to the intricacy and intimacy of this track. The background guitar is also rather hushed, adding to the calming effect. Overall, it is a beautiful folk tune.

The piece “The Lonesome Death of Hattie Carroll” further comments on racism which was prevalent in the time period. Based on the true story of Hattie Carroll, an African American barmaid who was the victim of manslaughter by wealthy, Caucasian tobacco farmer William Zantzinger. Although the nature of the murder was brutal and cruel, he was sentenced to only 6 months in prison, given his favored race and social status. Dylan’s imagery through words emphasize the difference in Carroll and Zantzinger’s auras to demonstrate the extent of the injustice; Carroll ” never once sat at the head of the table”, while Zantzinger is “swear words and sneering, and a [snarlin’ tongue]”. He ultimately criticizes the justice system and its formerly racially biased decisions. The story is told from a third-person perspective, and Dylan allows the audience to judge for themselves the extent of the tragedy, as he blatantly lays out the facts of the event.

Overall, Dylan uses his musical talent to speak to his fans and imprint a more powerful message than the ordinary catchy folk tune. “The Times They Are A-Changin””did not sacrifice any bit of musical genius in order to provoke change among the common American in the 1960s.

An Introduction to the Album the Times They Are A-Changin' by Bob Dylan. (2022, Nov 16). Retrieved from https://papersowl.com/examples/an-introduction-to-the-album-the-times-they-are-a-changin-by-bob-dylan/

An Analysis of the Impact of Bob Dylan, his Album Highway 61 Revisited, and his Song Like a Rolling Stone