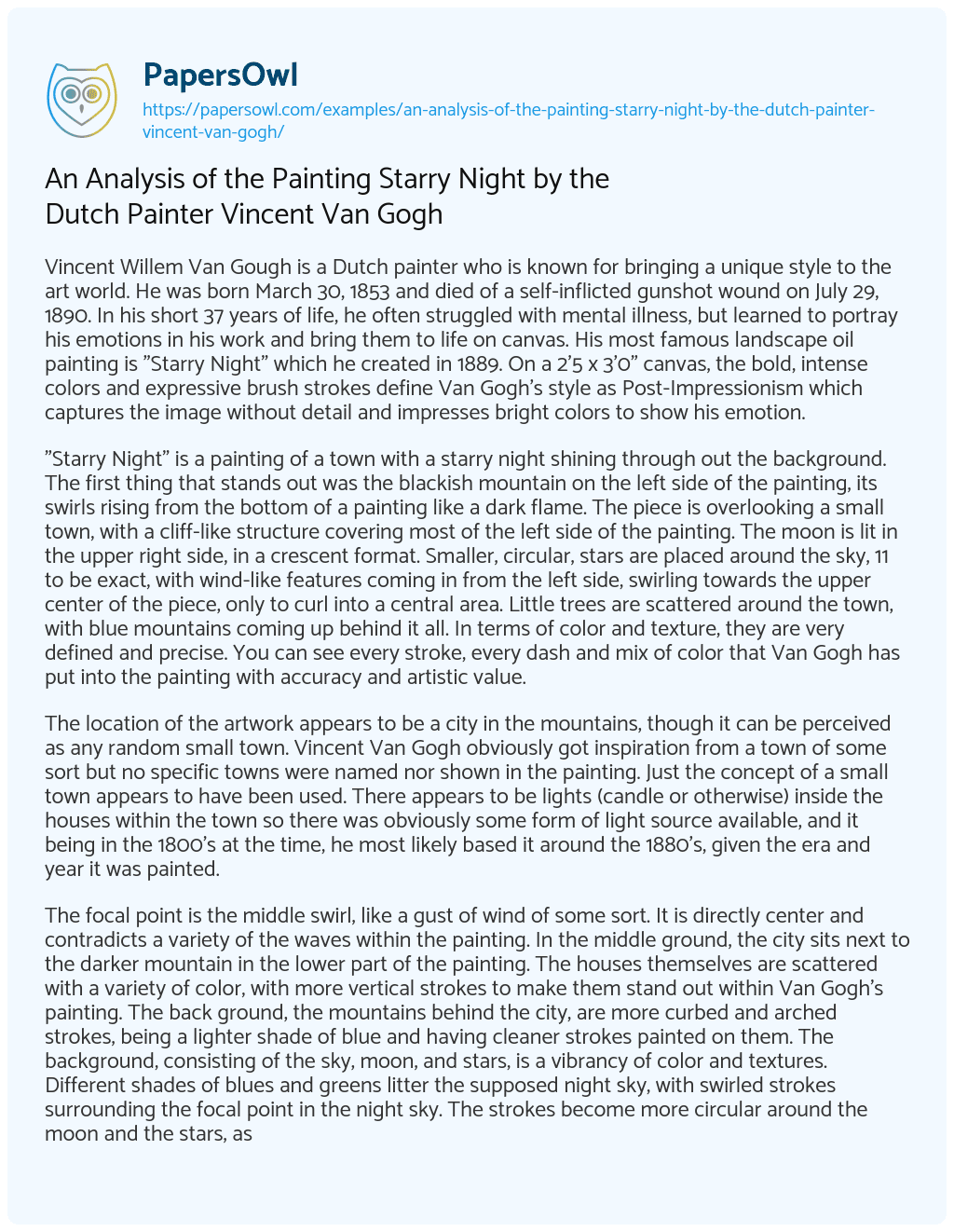 Vincent Willem Van Gough is a Dutch painter who is known for bringing a unique style to the art world. He was born March 30, 1853 and died of a self-inflicted gunshot wound on July 29, 1890. In his short 37 years of life, he often struggled with mental illness, but learned to portray his emotions in his work and bring them to life on canvas. His most famous landscape oil painting is “Starry Night” which he created in 1889. On a 2’5 x 3’0″ canvas, the bold, intense colors and expressive brush strokes define Van Gogh’s style as Post-Impressionism which captures the image without detail and impresses bright colors to show his emotion.

“Starry Night” is a painting of a town with a starry night shining through out the background. The first thing that stands out was the blackish mountain on the left side of the painting, its swirls rising from the bottom of a painting like a dark flame. The piece is overlooking a small town, with a cliff-like structure covering most of the left side of the painting. The moon is lit in the upper right side, in a crescent format. Smaller, circular, stars are placed around the sky, 11 to be exact, with wind-like features coming in from the left side, swirling towards the upper center of the piece, only to curl into a central area. Little trees are scattered around the town, with blue mountains coming up behind it all. In terms of color and texture, they are very defined and precise. You can see every stroke, every dash and mix of color that Van Gogh has put into the painting with accuracy and artistic value.

The location of the artwork appears to be a city in the mountains, though it can be perceived as any random small town. Vincent Van Gogh obviously got inspiration from a town of some sort but no specific towns were named nor shown in the painting. Just the concept of a small town appears to have been used. There appears to be lights (candle or otherwise) inside the houses within the town so there was obviously some form of light source available, and it being in the 1800’s at the time, he most likely based it around the 1880’s, given the era and year it was painted.

The focal point is the middle swirl, like a gust of wind of some sort. It is directly center and contradicts a variety of the waves within the painting. In the middle ground, the city sits next to the darker mountain in the lower part of the painting. The houses themselves are scattered with a variety of color, with more vertical strokes to make them stand out within Van Gogh’s painting. The back ground, the mountains behind the city, are more curbed and arched strokes, being a lighter shade of blue and having cleaner strokes painted on them. The background, consisting of the sky, moon, and stars, is a vibrancy of color and textures. Different shades of blues and greens litter the supposed night sky, with swirled strokes surrounding the focal point in the night sky. The strokes become more circular around the moon and the stars, as if it radiates from them. Some special details were from the circular radiances around the stars and the moon. The shifting color from yellow to green to blue really makes the starlight pop.

Vincent Van Gogh’s famous oil on canvas painting, ‘The Starry Night’, is a roughly painted scene that represents the view out of his window in an asylum room. While line and color are more emphasized, this painting used every element of design to create the emotion filled scene of hope and despair.

Van Gough predominantly uses line to create motion and direct the viewer’s eyes to the swirling night sky above the picture perfect town. Through motion, the audience’s eyes are led around the whirling sky to the bright stars and crescent moon. The staggered brush strokes create a hypnotizing line pattern above and shape the houses in the village below. This element of line strokes is repeated throughout the painting and works to unify the scene.

The primary use of different shades of blue and small burst of yellow suggests that it may be just before sunrise. The shades of blues create the nighttime feel that blankets the town and the sky. Meanwhile the burst of yellow light resembles the moon and stars lighting up the space around them. The spots of bright color help to balance the painting with the dark tones. “Van Gogh paints the rich colors of the night and this corresponds with the true character of this Starry Night, whereby colors are used to suggest emotion.” (Artble, 2016) The use of these few colors work in harmony to compliment each other as they are intermingled but never really blended together.

Though Vincent Van Gough struggled in his personal life, his artistic abilities made him the famous Impressionist that he is known for today. His use of design elements in “The Starry Night” have come together harmoniously to create the powerful image that has left people in awe and wonder.

The key elements of the “Starry Night” hold the most symbolic characteristics of Van Gogh as he slowly descended into madness. Many people interpret the lines use to move the viewer’s eyes around the painting as van Gogh’s tortured reality. Where everything he knows is slowly being turned into the crazy ramblings of a mad man.

By designing the artwork with a sense of swirls and curves it not only leads the viewer’s eyes around the canvas, but as well as give the idea of confusion something that most find to be reflective of Van Gogh himself and that due to the usage of a night sky it was symbolic of how his condition was very bleak as there was no way for him to recover. The town, in comparison to the night sky, is found to be very peaceful the church steeple is also stylized with the same effect as the sky this could as well be Van Gogh’s realization that the people in the town are all so normal; except for him, who is represented by the steeple, which is distorted like the night sky.

Though many could also believe that he saw things in a different way much like how all artisans should. The deep meaning though behind the starry night is found as insanity and isolation Van Gogh painted “The Starry Night” inside of an insane asylum. So obviously many people found him to be crazy and in need of help. His brother was probably the only one who actually understood him the best vs. the world that drew their conceptions and criticisms.

The art though was always thought to have a deep religious insight do to the fact that Van Gogh, who in his younger was influenced by his uncle, was a missionary. As well as he sent a letter stating, “a great starlit vault of heaven…one can only call God.” Many religious scholars as well believe the 11 stars in the painting are a reference to Genesis 37:9 “Then he dreamed another dream and told it to his brothers and said, ‘Behold, I have dreamed another dream. Behold, the sun, the moon, and eleven stars were bowing down to Me.” the verse that references the story of Joseph, about child that was given the gift of interpreting dream from God.

An Analysis of the Painting Starry Night by the Dutch Painter Vincent Van Gogh. (2022, Nov 17). Retrieved from https://papersowl.com/examples/an-analysis-of-the-painting-starry-night-by-the-dutch-painter-vincent-van-gogh/

A Personal Analysis of Starry Night, an Oil on Canvas by Vincent Van Gogh

The Use of Visual Imagery by Vincent Van Gogh

A Starry Night over the Rhone