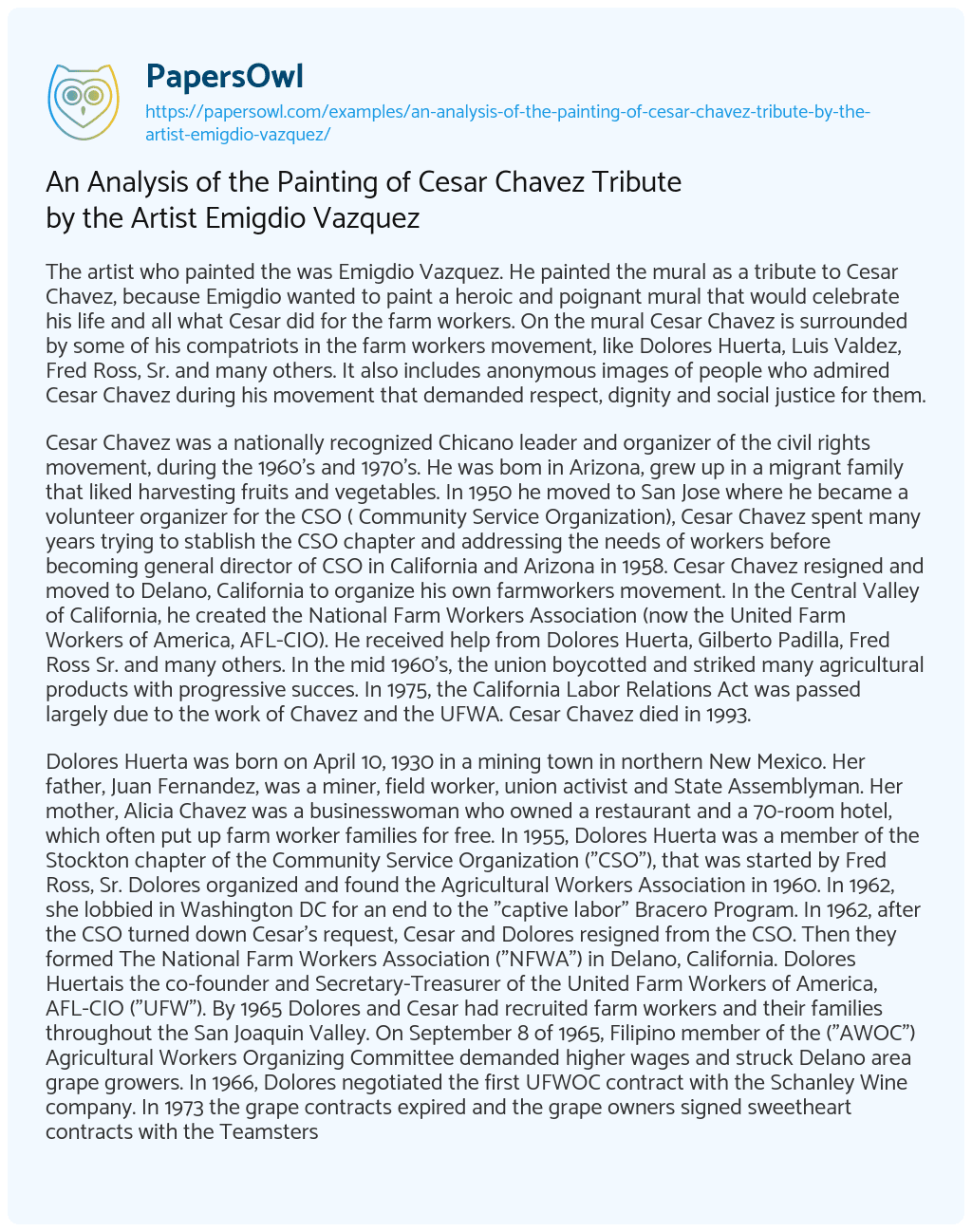 The artist who painted the was Emigdio Vazquez. He painted the mural as a tribute to Cesar Chavez, because Emigdio wanted to paint a heroic and poignant mural that would celebrate his life and all what Cesar did for the farm workers. On the mural Cesar Chavez is surrounded by some of his compatriots in the farm workers movement, like Dolores Huerta, Luis Valdez, Fred Ross, Sr. and many others. It also includes anonymous images of people who admired Cesar Chavez during his movement that demanded respect, dignity and social justice for them.

Cesar Chavez was a nationally recognized Chicano leader and organizer of the civil rights movement, during the 1960’s and 1970’s. He was bom in Arizona, grew up in a migrant family that liked harvesting fruits and vegetables. In 1950 he moved to San Jose where he became a volunteer organizer for the CSO ( Community Service Organization), Cesar Chavez spent many years trying to stablish the CSO chapter and addressing the needs of workers before becoming general director of CSO in California and Arizona in 1958. Cesar Chavez resigned and moved to Delano, California to organize his own farmworkers movement. In the Central Valley of California, he created the National Farm Workers Association (now the United Farm Workers of America, AFL-CIO). He received help from Dolores Huerta, Gilberto Padilla, Fred Ross Sr. and many others. In the mid 1960’s, the union boycotted and striked many agricultural products with progressive succes. In 1975, the California Labor Relations Act was passed largely due to the work of Chavez and the UFWA. Cesar Chavez died in 1993.

Dolores Huerta was born on April 10, 1930 in a mining town in northern New Mexico. Her father, Juan Fernandez, was a miner, field worker, union activist and State Assemblyman. Her mother, Alicia Chavez was a businesswoman who owned a restaurant and a 70-room hotel, which often put up farm worker families for free. In 1955, Dolores Huerta was a member of the Stockton chapter of the Community Service Organization (“CSO”), that was started by Fred Ross, Sr. Dolores organized and found the Agricultural Workers Association in 1960. In 1962, she lobbied in Washington DC for an end to the “captive labor” Bracero Program. In 1962, after the CSO turned down Cesar’s request, Cesar and Dolores resigned from the CSO. Then they formed The National Farm Workers Association (“NFWA”) in Delano, California. Dolores Huertais the co-founder and Secretary-Treasurer of the United Farm Workers of America, AFL-CIO (“UFW”). By 1965 Dolores and Cesar had recruited farm workers and their families throughout the San Joaquin Valley. On September 8 of 1965, Filipino member of the (“AWOC”) Agricultural Workers Organizing Committee demanded higher wages and struck Delano area grape growers. In 1966, Dolores negotiated the first UFWOC contract with the Schanley Wine company. In 1973 the grape contracts expired and the grape owners signed sweetheart contracts with the Teamsters Union. At 69 of age, Dolores Huerta still works long hours promoting “La Causa” and women’s rights. During thirty years Dolores Huerta remained Cesar Chavez most loyal and trusted advisor. Then they together founded the Robert F. Kennedy Medical Plan, the Juan De La Cruz Farm Worker Pension Fund, the Farm Workers Credit Union.

Under the leadership of nonviolence advocate Cesar Chavez, farmworkers launched a strike against California grape growers in 1965, demanding better working conditions and fair wages. In 1970, they undertook a national table grape boycott that eventually led to the first union contacts in farm labor history. An important milestone was the passing of the California Labor relations Act.

The Chicano/a movement, influenced by the Civil Rights Movement of the 1960’s, grew out of alliances between farmworkers struggling to unionize in California and Tezas. A chicano artist produced this mural on memory of Cesar Chavez and his movements in favor of the civil rights of the farmworkers in California, Texas, and Arizona.

An Analysis of the Painting of Cesar Chavez Tribute by the Artist Emigdio Vazquez. (2022, Nov 14). Retrieved from https://papersowl.com/examples/an-analysis-of-the-painting-of-cesar-chavez-tribute-by-the-artist-emigdio-vazquez/

The Life and Leadership of Cesar Chavez

The Colorful Life of Cesar Chavez, a Famous Labor Leader

The Techniques of Cesar Chavez in David Cortright’s Book, Gandhi and Beyond

The Life and Times of Cesar Chavez