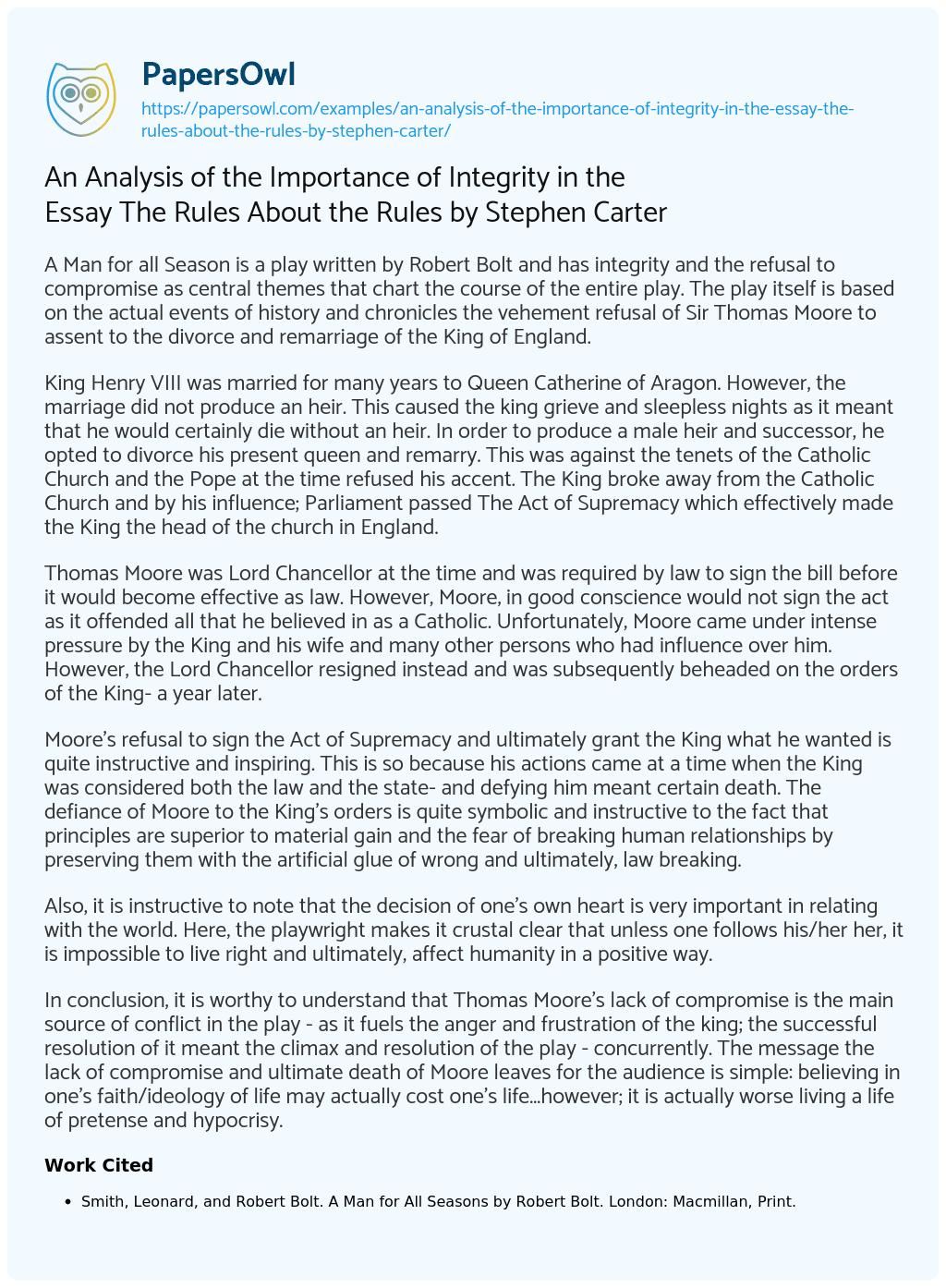 A Man for all Season is a play written by Robert Bolt and has integrity and the refusal to compromise as central themes that chart the course of the entire play. The play itself is based on the actual events of history and chronicles the vehement refusal of Sir Thomas Moore to assent to the divorce and remarriage of the King of England.

King Henry VIII was married for many years to Queen Catherine of Aragon. However, the marriage did not produce an heir. This caused the king grieve and sleepless nights as it meant that he would certainly die without an heir. In order to produce a male heir and successor, he opted to divorce his present queen and remarry. This was against the tenets of the Catholic Church and the Pope at the time refused his accent. The King broke away from the Catholic Church and by his influence; Parliament passed The Act of Supremacy which effectively made the King the head of the church in England.

Thomas Moore was Lord Chancellor at the time and was required by law to sign the bill before it would become effective as law. However, Moore, in good conscience would not sign the act as it offended all that he believed in as a Catholic. Unfortunately, Moore came under intense pressure by the King and his wife and many other persons who had influence over him. However, the Lord Chancellor resigned instead and was subsequently beheaded on the orders of the King- a year later.

Moore’s refusal to sign the Act of Supremacy and ultimately grant the King what he wanted is quite instructive and inspiring. This is so because his actions came at a time when the King was considered both the law and the state- and defying him meant certain death. The defiance of Moore to the King’s orders is quite symbolic and instructive to the fact that principles are superior to material gain and the fear of breaking human relationships by preserving them with the artificial glue of wrong and ultimately, law breaking.

Also, it is instructive to note that the decision of one’s own heart is very important in relating with the world. Here, the playwright makes it crustal clear that unless one follows his/her her, it is impossible to live right and ultimately, affect humanity in a positive way.

In conclusion, it is worthy to understand that Thomas Moore’s lack of compromise is the main source of conflict in the play – as it fuels the anger and frustration of the king; the successful resolution of it meant the climax and resolution of the play – concurrently. The message the lack of compromise and ultimate death of Moore leaves for the audience is simple: believing in one’s faith/ideology of life may actually cost one’s life…however; it is actually worse living a life of pretense and hypocrisy.

An Analysis of the Importance of Integrity in the Essay The Rules About the Rules by Stephen Carter. (2022, Nov 22). Retrieved from https://papersowl.com/examples/an-analysis-of-the-importance-of-integrity-in-the-essay-the-rules-about-the-rules-by-stephen-carter/

An Analysis of the Importance of Integrity in the Essay

The Importance of Integrity in Science

The Importance of Academic Integrity for Student Health Practitioner

An Analysis of the D-Day Invasion in Writings by Harding Ganz and Stephen T. Powers