An Analysis of Humanity from Individualism Point of View 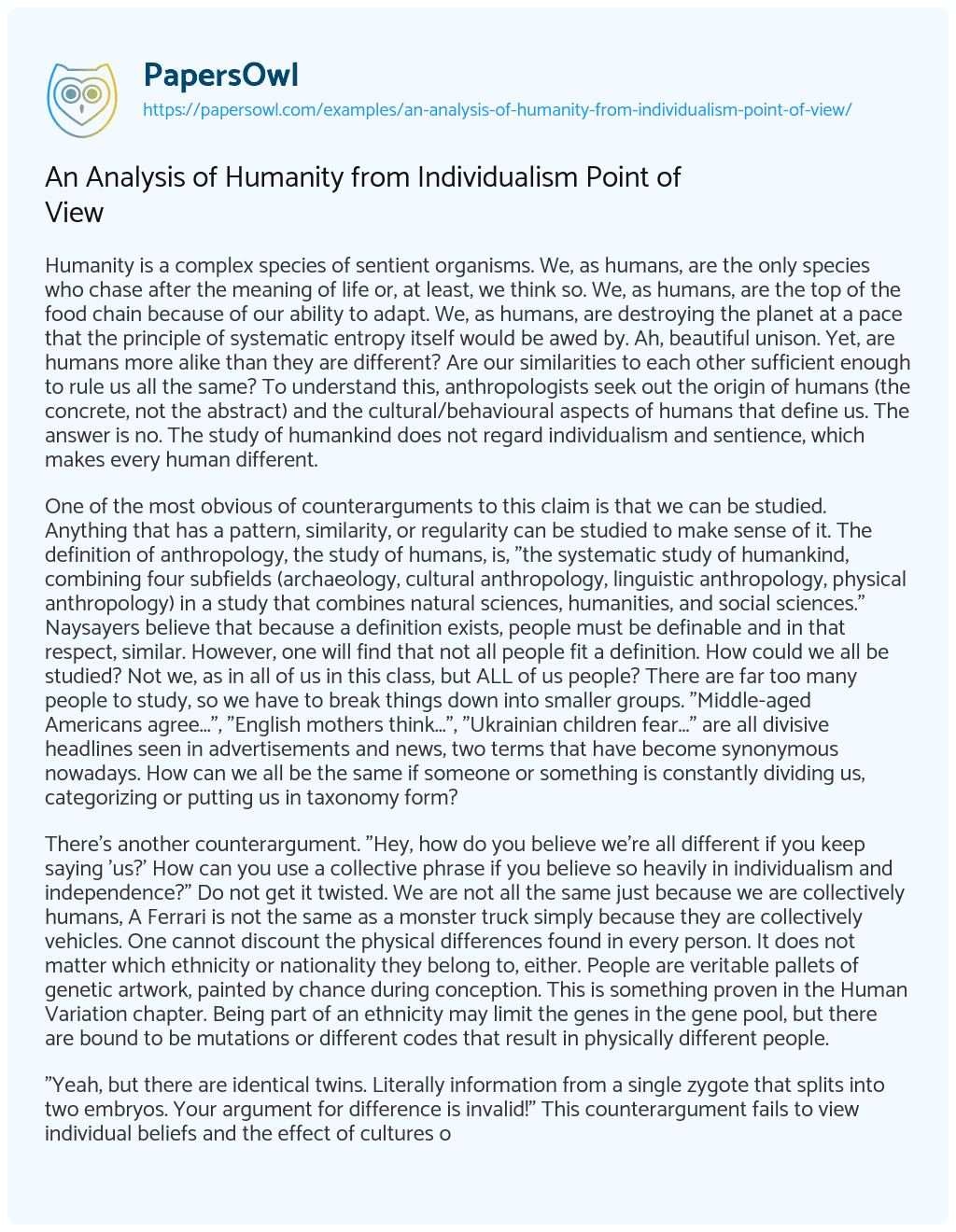 Humanity is a complex species of sentient organisms. We, as humans, are the only species who chase after the meaning of life or, at least, we think so. We, as humans, are the top of the food chain because of our ability to adapt. We, as humans, are destroying the planet at a pace that the principle of systematic entropy itself would be awed by. Ah, beautiful unison. Yet, are humans more alike than they are different? Are our similarities to each other sufficient enough to rule us all the same? To understand this, anthropologists seek out the origin of humans (the concrete, not the abstract) and the cultural/behavioural aspects of humans that define us. The answer is no. The study of humankind does not regard individualism and sentience, which makes every human different.

One of the most obvious of counterarguments to this claim is that we can be studied. Anything that has a pattern, similarity, or regularity can be studied to make sense of it. The definition of anthropology, the study of humans, is, “the systematic study of humankind, combining four subfields (archaeology, cultural anthropology, linguistic anthropology, physical anthropology) in a study that combines natural sciences, humanities, and social sciences.” Naysayers believe that because a definition exists, people must be definable and in that respect, similar. However, one will find that not all people fit a definition. How could we all be studied? Not we, as in all of us in this class, but ALL of us people? There are far too many people to study, so we have to break things down into smaller groups. “Middle-aged Americans agree…”, “English mothers think…”, “Ukrainian children fear…” are all divisive headlines seen in advertisements and news, two terms that have become synonymous nowadays. How can we all be the same if someone or something is constantly dividing us, categorizing or putting us in taxonomy form?

There’s another counterargument. “Hey, how do you believe we’re all different if you keep saying ‘us?’ How can you use a collective phrase if you believe so heavily in individualism and independence?” Do not get it twisted. We are not all the same just because we are collectively humans, A Ferrari is not the same as a monster truck simply because they are collectively vehicles. One cannot discount the physical differences found in every person. It does not matter which ethnicity or nationality they belong to, either. People are veritable pallets of genetic artwork, painted by chance during conception. This is something proven in the Human Variation chapter. Being part of an ethnicity may limit the genes in the gene pool, but there are bound to be mutations or different codes that result in physically different people.

“Yeah, but there are identical twins. Literally information from a single zygote that splits into two embryos. Your argument for difference is invalid!” This counterargument fails to view individual beliefs and the effect of cultures on the individual. Hypothetically, there are two identical North American twins, Elsa and Ana. They look exactly the same, speak exactly the same, and are the same age. While a physical difference is non-existent, Ana is wearing a Che Guevara t-shirt and designer jeans (ironically, of course) while listening to political rap while Elsa is wearing a blue blouse and reading “Thus Spake Zarathustra? for her own philosophical gain. Two entirely different people now, right? Culture is a factor that further divides people past physicality. Class, religion, income, education, social status, sexuality, and even preference of music are dividing cultural factors. This crafts individualism, which makes for certain individualistic traits. In fact the word “individual” contains the Latin root “divi-“, which means “to separate.” Therefore, to have individualism is to have a separating factor.

I’ve been speaking a lot about individualism, but came to this realization not too long ago. All humans have individualism. By this notion, all humans are similar in that they are all different. Confused? I sure am. I’ve never in the few short years I have lived ever seen someone who was like me. I’ve seen similarities, but they pale in comparison to how different everyone is from me. That’s okay. Just because we are different, it does not mean we are indifferent. Men and women of every color and creed, every ability and disability, and every view of life have the capability to bond together, to coexist in a sense. Humans are like that. So for every hammy, back-patting philanthropist out there who says, “We’re all the same, go us,” here’s a misanthrope saying, “We are all walking, talking, back-stabbing, hierarchy-having diseased crazies, and that’s beautiful.”

An Analysis of Humanity from Individualism Point of View. (2022, Nov 20). Retrieved from https://papersowl.com/examples/an-analysis-of-humanity-from-individualism-point-of-view/

A Manifestation of Individualism in Society

An Analysis of the Topic of the Individualism in an American Cultural Values and the Essay the Young, the Rich and the Famous by Poranee Natadecha-Sponsel

The Limits of Individualism

Can Individualism be Considered a Myth?