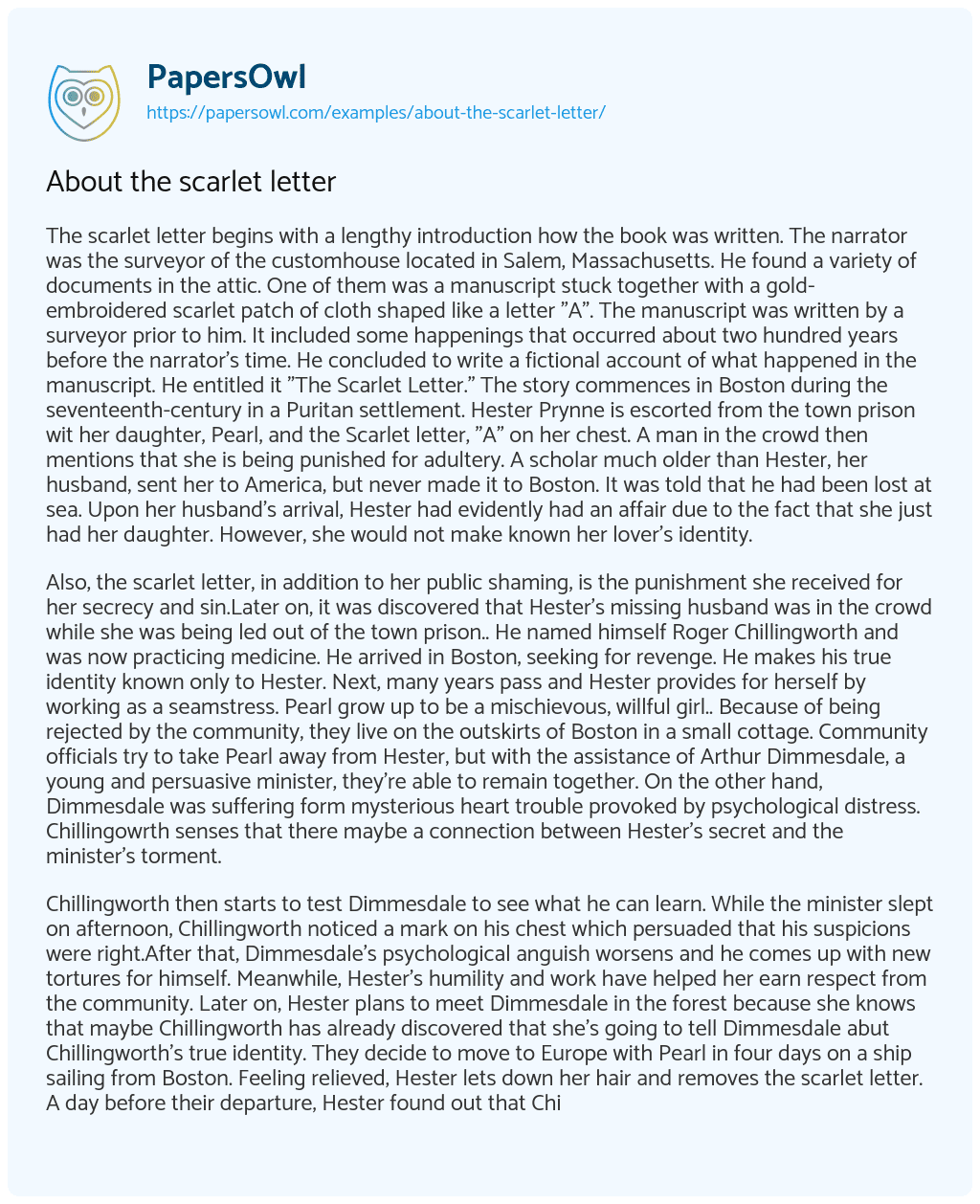 The scarlet letter begins with a lengthy introduction how the book was written. The narrator was the surveyor of the customhouse located in Salem, Massachusetts. He found a variety of documents in the attic. One of them was a manuscript stuck together with a gold-embroidered scarlet patch of cloth shaped like a letter “A”. The manuscript was written by a surveyor prior to him. It included some happenings that occurred about two hundred years before the narrator’s time. He concluded to write a fictional account of what happened in the manuscript. He entitled it “The Scarlet Letter.” The story commences in Boston during the seventeenth-century in a Puritan settlement. Hester Prynne is escorted from the town prison wit her daughter, Pearl, and the Scarlet letter, “A” on her chest. A man in the crowd then mentions that she is being punished for adultery. A scholar much older than Hester, her husband, sent her to America, but never made it to Boston. It was told that he had been lost at sea. Upon her husband’s arrival, Hester had evidently had an affair due to the fact that she just had her daughter. However, she would not make known her lover’s identity.

Also, the scarlet letter, in addition to her public shaming, is the punishment she received for her secrecy and sin.Later on, it was discovered that Hester’s missing husband was in the crowd while she was being led out of the town prison.. He named himself Roger Chillingworth and was now practicing medicine. He arrived in Boston, seeking for revenge. He makes his true identity known only to Hester. Next, many years pass and Hester provides for herself by working as a seamstress. Pearl grow up to be a mischievous, willful girl.. Because of being rejected by the community, they live on the outskirts of Boston in a small cottage. Community officials try to take Pearl away from Hester, but with the assistance of Arthur Dimmesdale, a young and persuasive minister, they’re able to remain together. On the other hand, Dimmesdale was suffering form mysterious heart trouble provoked by psychological distress. Chillingowrth senses that there maybe a connection between Hester’s secret and the minister’s torment.

Chillingworth then starts to test Dimmesdale to see what he can learn. While the minister slept on afternoon, Chillingworth noticed a mark on his chest which persuaded that his suspicions were right.After that, Dimmesdale’s psychological anguish worsens and he comes up with new tortures for himself. Meanwhile, Hester’s humility and work have helped her earn respect from the community. Later on, Hester plans to meet Dimmesdale in the forest because she knows that maybe Chillingworth has already discovered that she’s going to tell Dimmesdale abut Chillingworth’s true identity. They decide to move to Europe with Pearl in four days on a ship sailing from Boston. Feeling relieved, Hester lets down her hair and removes the scarlet letter. A day before their departure, Hester found out that Chillingworth knows their plan and booked a ticket on the same ship. After preaching, Dimmesdale confesses publicly, revealing a scarlet letter on his chest. He falls to the ground and passes away, as Pearl kisses him.One year later, Chillingowrth then passed away. Pearl and Hester flee from Boston and no one has any idea what happened to them. After many years, Hesster comes back home without Pearl, still wearing the scarlet letter, goes back to live in the same cottage and continues with her work. She usually receives letters from Pearl, who was now married to a European aristocrat and has a nice family. When Hester passed away, she was buried next to Dimmesdale. They both shared a tombstone with a scarlet letter “A”.

About the scarlet letter. (2020, May 14). Retrieved from https://papersowl.com/examples/about-the-scarlet-letter/

About the Scarlet Letter by Nathaniel Hawthorne