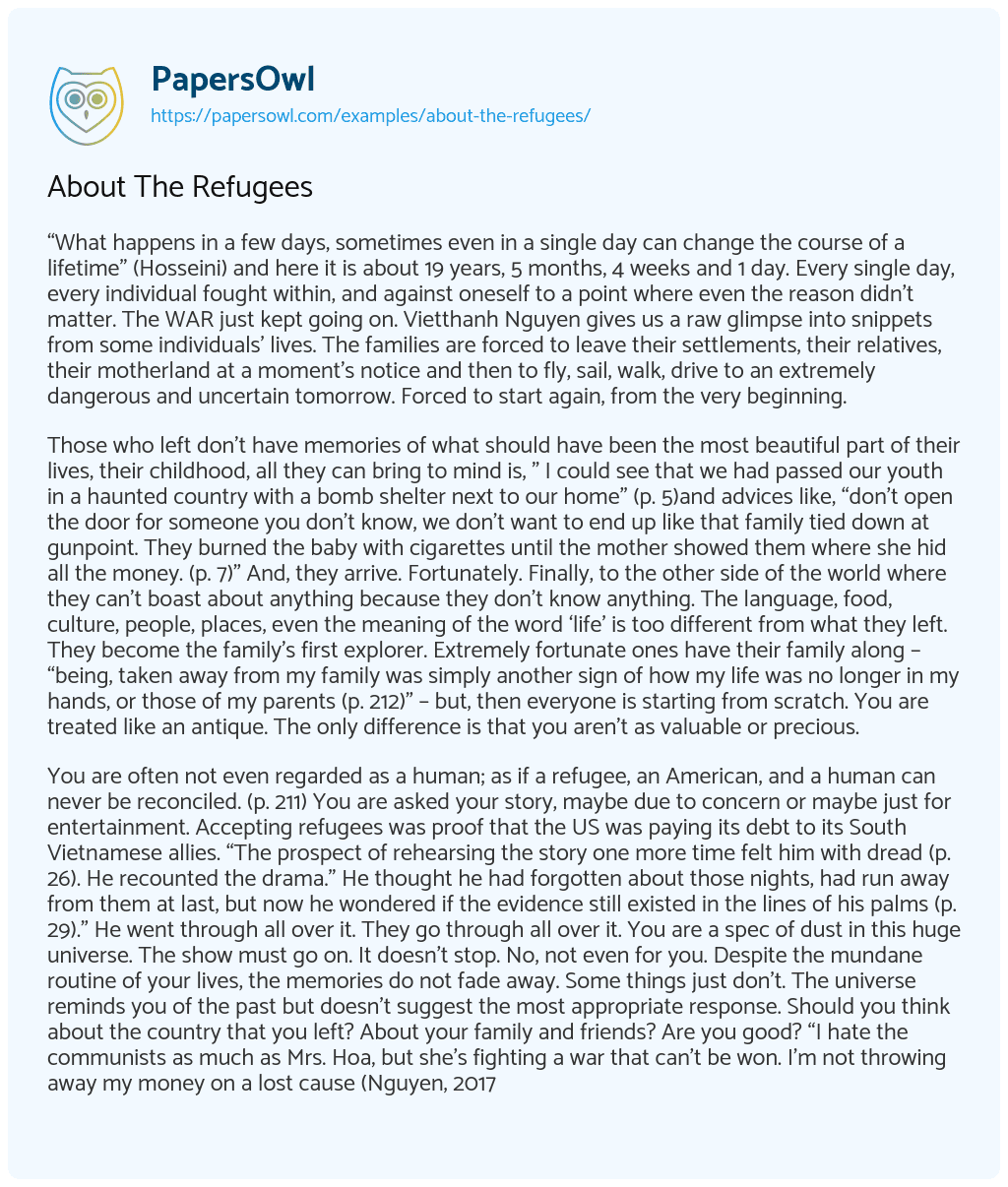 “What happens in a few days, sometimes even in a single day can change the course of a lifetime” (Hosseini) and here it is about 19 years, 5 months, 4 weeks and 1 day. Every single day, every individual fought within, and against oneself to a point where even the reason didn’t matter. The WAR just kept going on. Vietthanh Nguyen gives us a raw glimpse into snippets from some individuals’ lives. The families are forced to leave their settlements, their relatives, their motherland at a moment’s notice and then to fly, sail, walk, drive to an extremely dangerous and uncertain tomorrow. Forced to start again, from the very beginning.

Those who left don’t have memories of what should have been the most beautiful part of their lives, their childhood, all they can bring to mind is, ” I could see that we had passed our youth in a haunted country with a bomb shelter next to our home” (p. 5)and advices like, “don’t open the door for someone you don’t know, we don’t want to end up like that family tied down at gunpoint. They burned the baby with cigarettes until the mother showed them where she hid all the money. (p. 7)” And, they arrive. Fortunately. Finally, to the other side of the world where they can’t boast about anything because they don’t know anything. The language, food, culture, people, places, even the meaning of the word ‘life’ is too different from what they left. They become the family’s first explorer. Extremely fortunate ones have their family along – “being, taken away from my family was simply another sign of how my life was no longer in my hands, or those of my parents (p. 212)” – but, then everyone is starting from scratch. You are treated like an antique. The only difference is that you aren’t as valuable or precious.

You are often not even regarded as a human; as if a refugee, an American, and a human can never be reconciled. (p. 211) You are asked your story, maybe due to concern or maybe just for entertainment. Accepting refugees was proof that the US was paying its debt to its South Vietnamese allies. “The prospect of rehearsing the story one more time felt him with dread (p. 26). He recounted the drama.” He thought he had forgotten about those nights, had run away from them at last, but now he wondered if the evidence still existed in the lines of his palms (p. 29).” He went through all over it. They go through all over it. You are a spec of dust in this huge universe. The show must go on. It doesn’t stop. No, not even for you. Despite the mundane routine of your lives, the memories do not fade away. Some things just don’t. The universe reminds you of the past but doesn’t suggest the most appropriate response. Should you think about the country that you left? About your family and friends? Are you good? “I hate the communists as much as Mrs. Hoa, but she’s fighting a war that can’t be won. I’m not throwing away my money on a lost cause (Nguyen, 2017, p. 57)” and you realize “While some people are haunted by the dead, others are by the living” (Nguyen, 2017, p. 71). You are filled with guilt and seek validation everywhere you go. You grow old.

If your generation continues, your life gradually turns to an adventurous narrative and then, just a narrative. You and your partner, if together, shed light on your past, think about “those” days. “After the fourth day at sea, he and the rest of the children were crying for water, even though there was none to offer but the seas. Yet, she had washed their faces and combed their hair every morning, using salt water and spit. She was teaching them that decorum mattered even now, and that their mother’s fear wasn’t so strong that it couldn’t prevent her from loving them (Nguyen, 2017, p. 107)”. During arguments, your kids say, “But you could always go home, there was always a place for you somewhere. But there’s never been a place for me (Nguyen, 2017, p. 131).” A pang of guilt overrides you for a while. You think about all the opportunities you didn’t get. About how unfair life is. Gradually, all that you can do is feel grateful for being alive, for being given a second shot not in your head but at life. There was a look in people’s eyes that said, “What are you?” It is there sometimes even today. Your responses have become a little more subtle, a little more accepting. Today, the fear is if you ever will be truly a part of this world. Will you ever be a citizen of a country that loves you like others? Will there ever be a level-playing ground? America’s foundation is built on two contradictory aspects: by immigrants and foreigners and by genocide, slavery and colonialism.

While today, 51% of billion-dollar startups are founded by immigrants and all of the 2016 Nobel prize winners are immigrants , the country has periodically turned on them. The intense debate over immigration reflects deep value conflicts in the cultures of many nations. One strand of our culture, for example, has traditionally emphasized egalitarian principles and a desire to help people in time of need. At the same time, hostility to potential immigrants and refugees— whether the Chinese in the 1880s, European Jews in the 1930s and 1940s, or Mexicans, Haitians, and Arabs today—reflects not only racial, ethnic, and religious prejudice, but a desire to maintain the dominant culture of the in-group by keeping out those viewed as outsiders. Americans believe that it is impossible for an American to become a refugee, although it is possible for refugees to become Americans and in that way be elevated one step closer to heaven. Asian Americans are often held up as a model, or ideal, minority group, because they have succeeded economically, socially, and educationally despite past prejudice and discrimination and without resorting to political and violent confrontations with Whites. But, even those groups who haven’t achieved exponential feats of excellence, should be treated as human as an average American. For a long time, people in the United States demanded conformity to a single language. Little respect was granted to immigrants’ and refugees’ cultural traditions (Schaefer, p. 261). Immigrants, including those who are in the United States legally, are also more likely than others to be precariously employed (employment that is poorly paid, and from the worker’s perspective, insecure and unprotected) .

After the September 11, 2001, terrorist attacks on the United States, suspicions arose about Muslim and Arab immigrants (Schaefer, p. 292). Racial profiling (any arbitrary action initiated by an authority based on race, ethnicity, or national origin rather than on a person’s behavior) grew on a large-scale. Legal immigrants who were identified as Arab or Muslim were scrutinized for possible illegal activity and prosecuted for violations that authorities routinely ignored among immigrants of other ethnicities and faiths. Yes, we have problems. To err is human, but we are growing. I am optimistic that we are developing and are moving towards a brighter future, together with the entire world. Until humanity not just blood beats in our hearts, until hope finds its way from the gray clouds of fear, we will fight. We will make this world more beautiful than it already is with our compassion, humility and courage. “We would come outside after the bombing, you holding my hands while we stood blinking in the sun. What I loved was how after the darkness of hiding there came the light. And, after all that thunder, silence”.

About The Refugees. (2021, Apr 08). Retrieved from https://papersowl.com/examples/about-the-refugees/

The is Immigration Discrimination