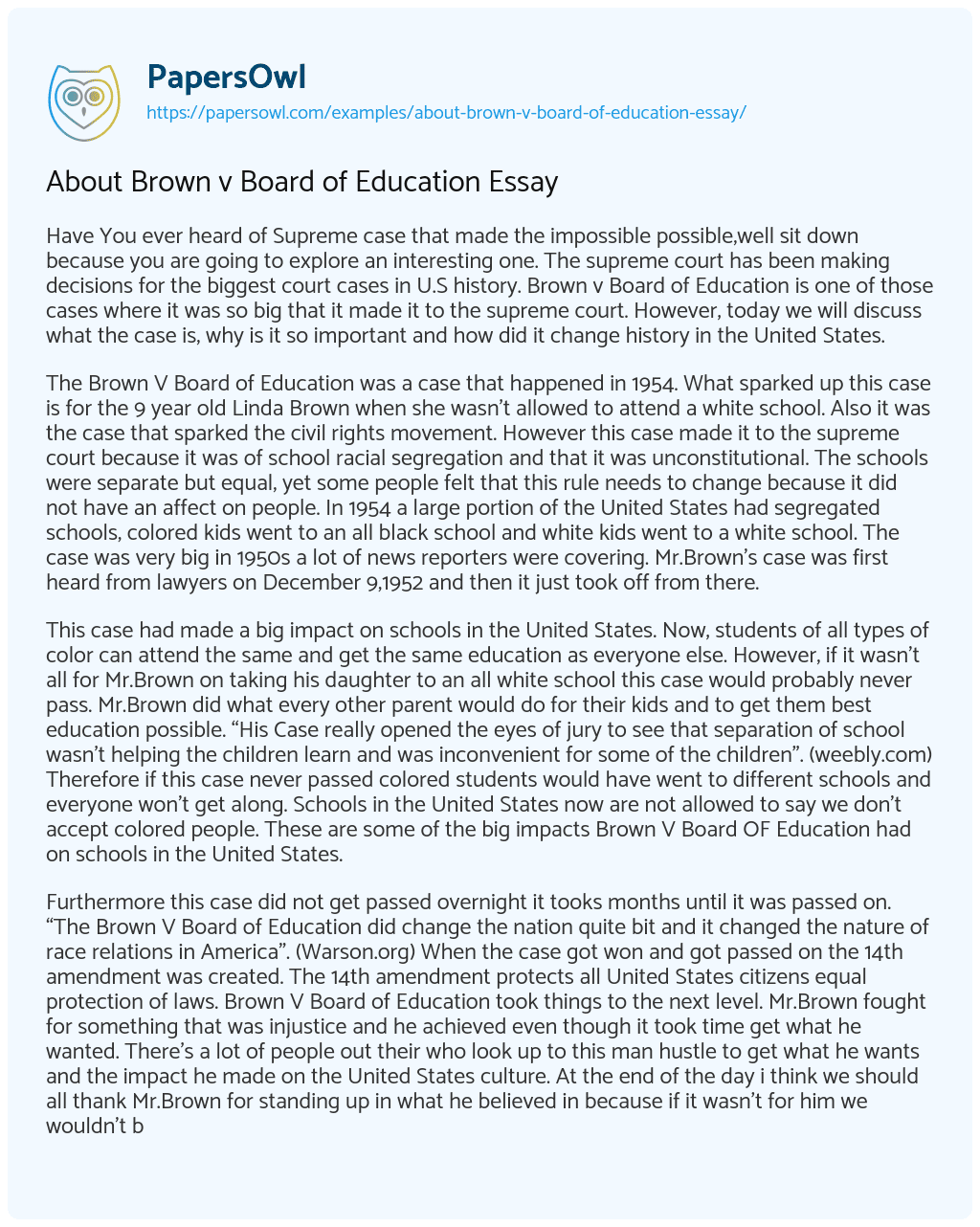 Have You ever heard of Supreme case that made the impossible possible,well sit down because you are going to explore an interesting one. The supreme court has been making decisions for the biggest court cases in U.S history. Brown v Board of Education is one of those cases where it was so big that it made it to the supreme court. However, today we will discuss what the case is, why is it so important and how did it change history in the United States.

The Brown V Board of Education was a case that happened in 1954. What sparked up this case is for the 9 year old Linda Brown when she wasn’t allowed to attend a white school. Also it was the case that sparked the civil rights movement. However this case made it to the supreme court because it was of school racial segregation and that it was unconstitutional. The schools were separate but equal, yet some people felt that this rule needs to change because it did not have an affect on people. In 1954 a large portion of the United States had segregated schools, colored kids went to an all black school and white kids went to a white school. The case was very big in 1950s a lot of news reporters were covering. Mr.Brown’s case was first heard from lawyers on December 9,1952 and then it just took off from there.

This case had made a big impact on schools in the United States. Now, students of all types of color can attend the same and get the same education as everyone else. However, if it wasn’t all for Mr.Brown on taking his daughter to an all white school this case would probably never pass. Mr.Brown did what every other parent would do for their kids and to get them best education possible. “His Case really opened the eyes of jury to see that separation of school wasn’t helping the children learn and was inconvenient for some of the children”. (weebly.com) Therefore if this case never passed colored students would have went to different schools and everyone won’t get along. Schools in the United States now are not allowed to say we don’t accept colored people. These are some of the big impacts Brown V Board OF Education had on schools in the United States.

Furthermore this case did not get passed overnight it tooks months until it was passed on. “The Brown V Board of Education did change the nation quite bit and it changed the nature of race relations in America”. (Warson.org) When the case got won and got passed on the 14th amendment was created. The 14th amendment protects all United States citizens equal protection of laws. Brown V Board of Education took things to the next level. Mr.Brown fought for something that was injustice and he achieved even though it took time get what he wanted. There’s a lot of people out their who look up to this man hustle to get what he wants and the impact he made on the United States culture. At the end of the day i think we should all thank Mr.Brown for standing up in what he believed in because if it wasn’t for him we wouldn’t be in the same schools with each other.

Brown V Board of Education case went down in the history books that people still talk about it till now. Without this case segregation would still exist, colored people have their own places and whites have their own places. The impact it made on the United States were things that will never change forever. Also this case did not only made an impact on the Schools in the United States but everywhere else. However when it was passed a lot of people felt little more comfortable after.

About Brown v Board of Education Essay. (2021, Mar 08). Retrieved from https://papersowl.com/examples/about-brown-v-board-of-education-essay/