A Comparison of the Similarities and Differences between Dogs and Cats 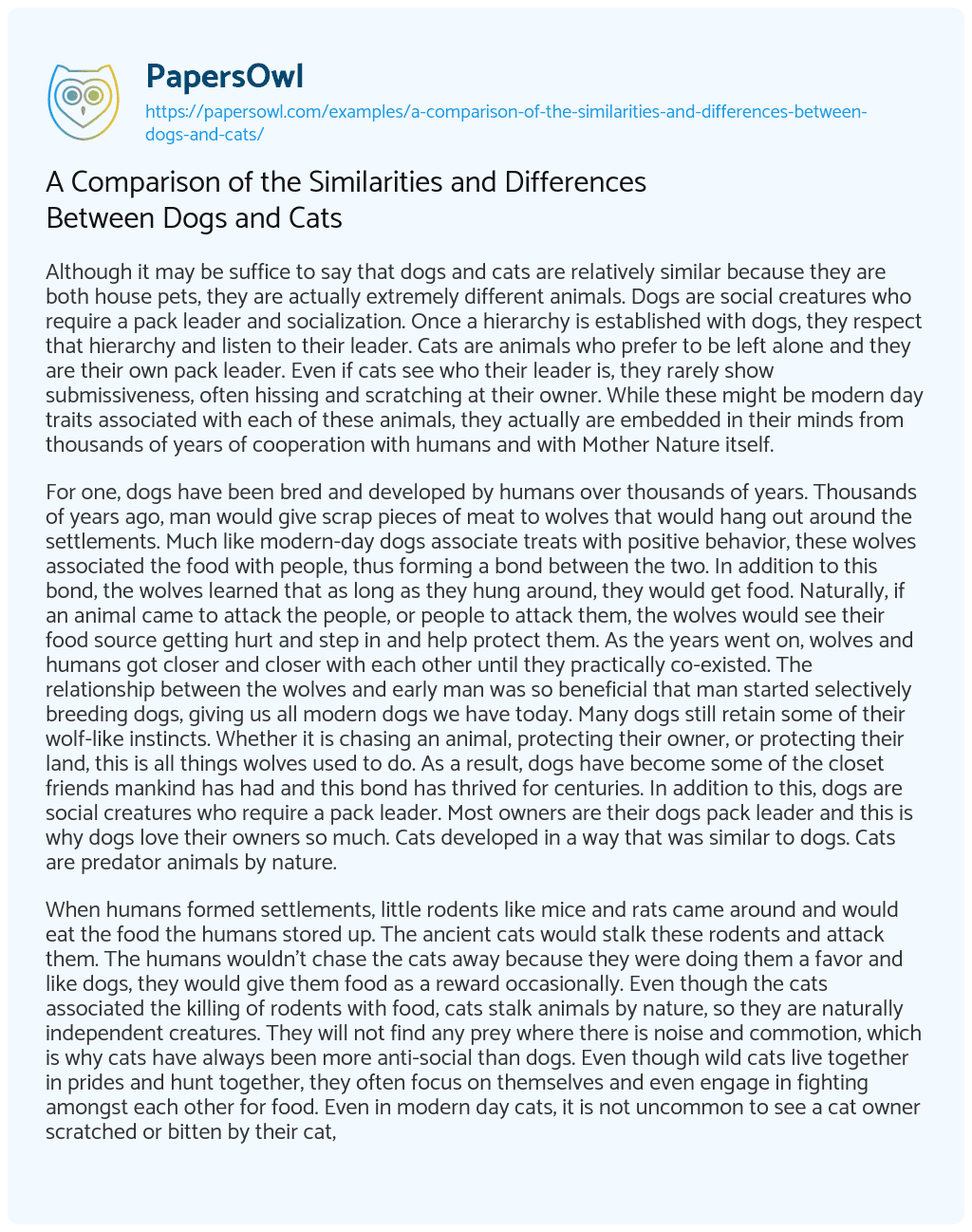 Although it may be suffice to say that dogs and cats are relatively similar because they are both house pets, they are actually extremely different animals. Dogs are social creatures who require a pack leader and socialization. Once a hierarchy is established with dogs, they respect that hierarchy and listen to their leader. Cats are animals who prefer to be left alone and they are their own pack leader. Even if cats see who their leader is, they rarely show submissiveness, often hissing and scratching at their owner. While these might be modern day traits associated with each of these animals, they actually are embedded in their minds from thousands of years of cooperation with humans and with Mother Nature itself.

For one, dogs have been bred and developed by humans over thousands of years. Thousands of years ago, man would give scrap pieces of meat to wolves that would hang out around the settlements. Much like modern-day dogs associate treats with positive behavior, these wolves associated the food with people, thus forming a bond between the two. In addition to this bond, the wolves learned that as long as they hung around, they would get food. Naturally, if an animal came to attack the people, or people to attack them, the wolves would see their food source getting hurt and step in and help protect them. As the years went on, wolves and humans got closer and closer with each other until they practically co-existed. The relationship between the wolves and early man was so beneficial that man started selectively breeding dogs, giving us all modern dogs we have today. Many dogs still retain some of their wolf-like instincts. Whether it is chasing an animal, protecting their owner, or protecting their land, this is all things wolves used to do. As a result, dogs have become some of the closet friends mankind has had and this bond has thrived for centuries. In addition to this, dogs are social creatures who require a pack leader. Most owners are their dogs pack leader and this is why dogs love their owners so much. Cats developed in a way that was similar to dogs. Cats are predator animals by nature.

When humans formed settlements, little rodents like mice and rats came around and would eat the food the humans stored up. The ancient cats would stalk these rodents and attack them. The humans wouldn’t chase the cats away because they were doing them a favor and like dogs, they would give them food as a reward occasionally. Even though the cats associated the killing of rodents with food, cats stalk animals by nature, so they are naturally independent creatures. They will not find any prey where there is noise and commotion, which is why cats have always been more anti-social than dogs. Even though wild cats live together in prides and hunt together, they often focus on themselves and even engage in fighting amongst each other for food. Even in modern day cats, it is not uncommon to see a cat owner scratched or bitten by their cat, as they lack a strict social hierarchy.

Even though cats and dogs developed in the same ways, they are entirely different animals. They both learned to associate food with positive things. They approached humans because they both offered food to the animals, but in different ways. The dogs were more or less given the food in exchange for help hunting and protecting. The cats on the other hand were given the food in exchange for a service which was controlling rodent populations. Also, due to the nature of their hunting styles, dogs and cats are different mentally. Dogs would hunt in groups, using numbers and sheer strength to take down an animal. Cats would instead silently stalk an animal, and surprise attack it. If the animal got out of the ambush, cats would then use their speed to chase it down, which relies solely on how fast each cat can run. Dog’s style of hunting promoted teamwork and cooperation while the cat’s style of hunting promoted silence and independence.

A Comparison of the Similarities and Differences Between Dogs and Cats. (2022, Nov 23). Retrieved from https://papersowl.com/examples/a-comparison-of-the-similarities-and-differences-between-dogs-and-cats/

Compare and Contrast about Cats and Dogs

Dogs are Better than Cats Essay

A Comparison between the Traits of a Cat and a Dog

Dogs are the Best Pets